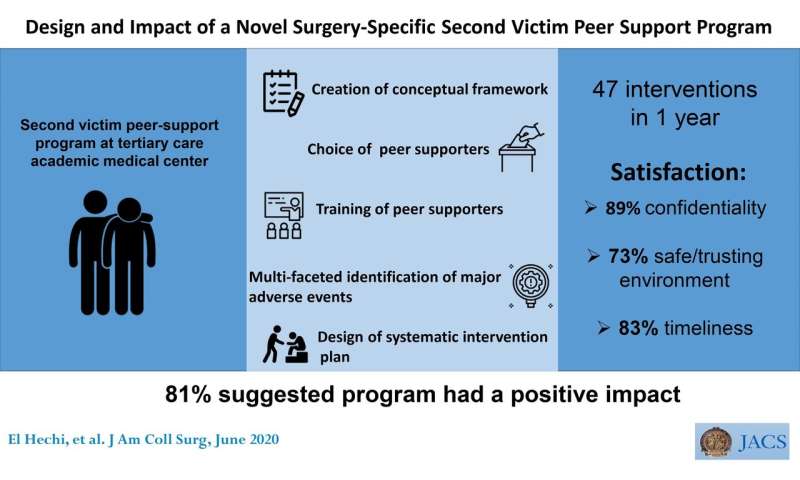 When an error or complication happens during an operation, the surgeon performing the procedure can become a “second victim” due to the psychological and emotional trauma experienced after a major adverse event. While many medical centers offer support to surgeons who may be experiencing self-doubt, guilt, and anxiety after such an event, a new program at Massachusetts General Hospital (MGH), Boston, goes a step further by providing opportunities for surgeons to offer and receive support from fellow surgeons who directly understand their experience. Researchers from MGH report on the success of the program in an “article in press” published on the website of the Journal of the American College of Surgeons ahead of print.

A formal surgery-specific peer support program was developed at MGH with the goal of helping surgeons and surgical trainees deal with not only adverse events that happen during an operation, but also catastrophic patient outcomes and long-term litigation cases. The idea for the program stemmed from results of the Boston Intraoperative Adverse Events Surgeons’ Attitudes (BISA) study, which revealed, confidentially and anonymously, how surgeons felt after an injury happened to a patient during an operation.

“This is an issue that has been swept under the carpet for too many years in the surgical world under the pretext that surgeons can deal with anything,” said Haytham Kaafarani, MD, MPH, FACS, a study coauthor and Director of the Center for Outcomes and Patient Safety in Surgery (COMPASS), MGH. “A lot of times surgeons suffer alone. We have a perception that surgeons can deal with anything, that we’re made of steel. We continue on without taking time to reflect on our own emotions.”

The researchers selected and trained peer supporters who were well respected and trusted by their peers. The training included a four-hour session during which time the peer supporters reviewed literature on physician health and the second victim phenomenon, participated in interactive role-playing exercises, and learned about resources available to second victims.

After identifying a major adverse event and the members of the surgical team who might benefit from the peer support program, peer supporters would reach out to an affected peer and follow a four-step strategy:

1.Introduce the peer support process, emphasizing the confidentiality of the conversation and stressing that he or she does not know the details of the adverse event and that his or her role is to listen and help, not to investigate.

2.Listen in a non-judgmental fashion, acknowledging the second victim’s difficult experience rather than trying to resolve any issues. Efforts to trivialize an event or feeling are avoided. Peer supporters are encouraged to offer empathy and to share personal experiences when appropriate.

3.Review common symptoms and feelings clinicians experience after an adverse event and ask if the affected peer is experiencing any of these emotions.

4.Create a plan with the affected peer by reinforcing useful coping strategies and inquiring about existing support systems. The potential need for continued support is discussed.

Efforts were made to match a surgeon with a peer supporter based on availability, absence of hierarchy, gender, and personal/cultural background, when feasible.

“When I sit with a fellow surgeon who is telling me how they felt when they were operating and injured a major structure in a patient, I can tell him or her, with credibility, that I know how it feels,” Dr. Kaafarani said. “That simple identification of, ‘I know how it feels,’ and ‘I’m willing to listen to you,’ is very powerful.”

Throughout the first year of the program, 47 outreach interventions occurred. In a survey administered to evaluate the program, most participants expressed satisfaction and 81 percent suggested the program had a positive impact on the department’s safety and support culture by raising awareness of the need to support colleagues going through difficult patient situations.

The researchers identified areas for improvement, including enhancing the process for identifying events requiring outreach, increasing departmental awareness of the program, and providing opportunities for affected individuals to reach out to the program even when an adverse event was not identified.

Dr. Kaafarani believes this program can be implemented in medical centers of any size. The most important aspect for the program to work, he said, is for surgeons to believe in the program and be committed to participating.

“A second victim peer support program for surgeons is a good investment in any hospital,” Dr. Kaafarani said. “If we take care of each other as surgeons, I believe that improves our overall well-being and decreases burnout over the long term, which in turn brings better quality of care to our patients.”