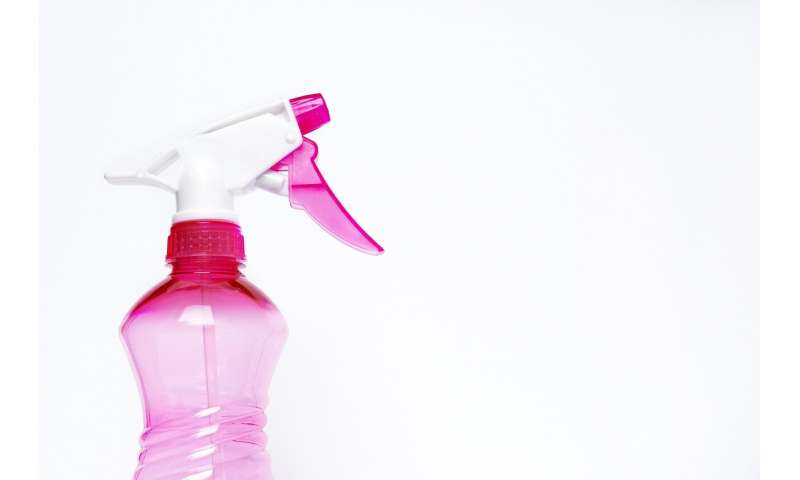 Young children from low-income homes whose mothers reported frequent use of toxic chemicals such as household cleaners were more likely to show delays in language development by age 2, a new study found.

In addition, the children scored lower on a test of cognitive development. These developmental delays were evident even when the researchers took into account factors such as the education and income of mothers, which are also linked to their children’s language and cognitive skills.

The findings provide additional evidence of the need for pediatricians and other health care providers to counsel parents of young children to restrict their use of toxic household chemicals, said Hui Jiang, lead author of the study and senior research associate at The Ohio State University.

“We found that a significant percentage of mothers with young children may commonly expose their children to toxic household chemicals, possibly because they are unaware that such materials may be harmful,” said Jiang, who is with Ohio State’s Crane Center for Early Childhood Research and Policy.

The study was published online recently in the journal Clinical Pediatrics.

The researchers used data on 190 families from the Kids in Columbus Study, a Crane Center research project that followed children born into low-income families in Columbus for five years after birth.

When they first started the study, mothers were asked about their use of household chemicals such as floor and toilet cleaners and solvents during pregnancy. They were asked again when their child was 14 to 23 months old. Mothers also reported whether they had mold in the home, their use of pesticides, and neighborhood pollution sources.

Children’s language development was measured when they were between 14 and 23 months old and again when they were 20 to 25 months old. The researchers used a standardized test that examines children’s understanding and expression of language—for example, recognition of objects and people, following directions, and naming objects and pictures.

Findings showed that neighborhood pollution, mold in the house and pesticide use were not significantly linked to child outcomes.

But the more household chemicals mothers reported using regularly after childbirth, the lower the child language and cognitive outcomes at two years of age.

Exposure to toxic chemicals was reported by about 20 percent of mothers during pregnancy, but that increased to 30 percent when their children were between one and two years old. Mothers also reported using more household chemicals after childbirth.

“A lot of mothers seem to know to limit exposure to toxic chemicals during pregnancy, but once their child is born, they may think it is no longer a problem,” Jiang said.

But research has shown these early years of a child’s life are key in many ways, said Laura Justice, co-author of the study and professor of educational psychology at Ohio State.

“When kids reach about two years old, that is a peak time for brain development,” said Justice, who is executive director of The Crane Center.

“If the use of toxic chemicals is interfering with that development, that could lead to problems with language and cognitive growth.”

While many mothers may use household cleaners and other toxic chemicals when their children are young, low-income mothers may face particular challenges, Jiang said.

For example, they often live in smaller apartments where it may be more difficult to keep children away from chemicals, particularly while they are cleaning.

Jiang noted that this study simply analyzed the relationship between mothers’ use of toxic chemicals and later child development and as such can’t prove that chemical use caused the developmental delays.

“Future studies are need to more carefully examine the mechanisms through which household toxicants may disrupt early language development,” she said.

The findings do show that pediatricians need to emphasize that pregnancy is not the only time for mothers to be concerned about chemical use, Justice said.