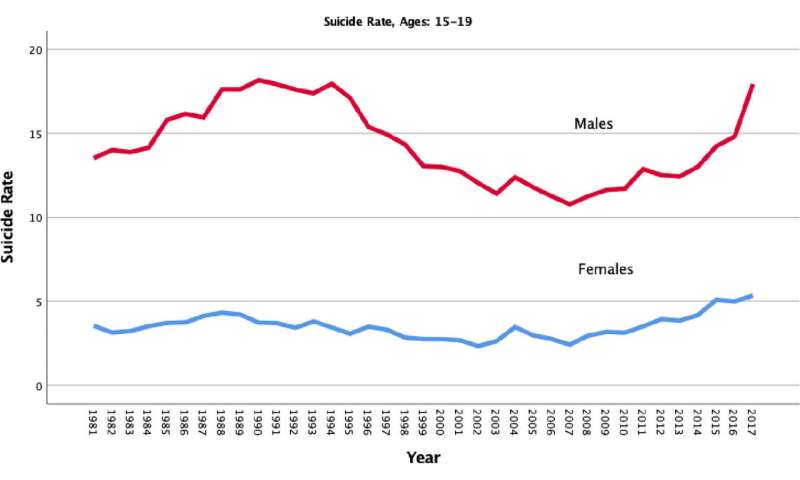 Contrary to the findings of a 2019 study that associated the release of the Netflix series “13 Reasons Why” with an increase in monthly suicide rates among adolescent boys, a reanalysis of the data by the Annenberg Public Policy Center finds no evidence of contagion. The reanalysis, published today in PLOS ONE, found that after controlling for the dramatic increase in adolescent suicide in recent years, the show’s release had no clear effect.

The reanalysis found that the increase in the suicide rate for boys observed in the original study by Bridge and colleagues for three months after the series’ release was no longer evident after controlling for the ongoing trend in adolescent suicide. In addition, the increase seen during the first month of the release began the month prior to the release, making it difficult to attribute the rise to the show. The reanalysis found no effects in the subsequent months of that year.

“Our reanalysis casts considerable doubt on the show having an effect on boys,” said author Dan Romer, Ph.D., research director of the Annenberg Public Policy Center (APPC) of the University of Pennsylvania. The paper, “Reanalysis of the Bridge et al. study of suicide following release of 13 Reasons Why,” was published January 15, 2020, in PLOS ONE.

The original time-series analysis of suicide rates by Bridge et al. found an additional 195 suicide deaths among boys ages 10 to 17 during the nine months following the series’ release, on March 31, 2017, but did not find a similar result among adolescent girls. Romer said he questioned that finding for two reasons: “First, contagion would be expected to be stronger for girls than boys because this show focuses on the suicide of a high school girl. Second, the prior analysis didn’t take into account strong secular trends in suicide, especially in boys from 2016-2017.”

APPC’s reanalysis did find a modest rise in the suicide rate among adolescent girls during the first month following the release of “13 Reasons Why,” but it was not statistically reliable.

There has been disagreement about the causes of the recent rise in adolescent and young adult suicide. Some researchers have suggested that the rise is due to increased use of social media. But a recently published analysis by Romer suggested that the trend may be attributable in part to lingering economic stress from the 2008 financial crisis in combination with increased pressure on teens from their parents to succeed academically.

’13 Reasons Why’ and suicide contagion

When the first season of the Netflix show appeared in 2017, it created widespread concern that its graphic portrayal of a teenage girl’s suicide would lead to imitation among vulnerable young people, especially adolescent girls. This concern prompted researchers to see whether there was evidence of contagion in U.S. suicide rates following the show’s release.

The first such study, by Bridge et al., found evidence of a jump in suicides among boys ages 10 to 17 in the three months following the show’s release, but no effect for girls. Romer said that analysis relied on a forecasting method to project the likely trend in suicide for 2017. But that forecast failed to anticipate the actual trend.

A second study by different researchers (Niederkrotenthaler et al.) in JAMA Psychiatry had a similar problem, Romer said. That study found an effect in boys and girls 10 to 19 years old in the three months following the series’ release. But it similarly failed to control for the secular trend in suicide, again making it difficult to separate the effects of the show from the trend.

APPC’s analysis does not rule out the possibility that the show had an adverse effect, especially on girls. A previous study by Romer and colleagues that examined the effects of the second season of “13 Reasons Why” found that viewing the show had both beneficial and detrimental effects on young adult viewers. The small increase observed in girls in this current reanalysis of the first season data may have been the net result of these opposing effects, Romer said.

In mid-2019, over two years after the release, Netflix edited a graphic suicide scene from the Season 1 finale and asserted that the show encouraged young people “to start conversations about difficult issues such as depression and suicide and get help—often for the first time.”

“Despite that, it does not appear that the show reversed or slowed the ongoing increase in adolescent suicide,” Romer noted. “Even if the series also had a positive effect for some viewers, the producers should recognize the potential for harm to vulnerable audience members. It should be possible to produce a show that highlights the challenges that young people face without also producing suicide contagion.”