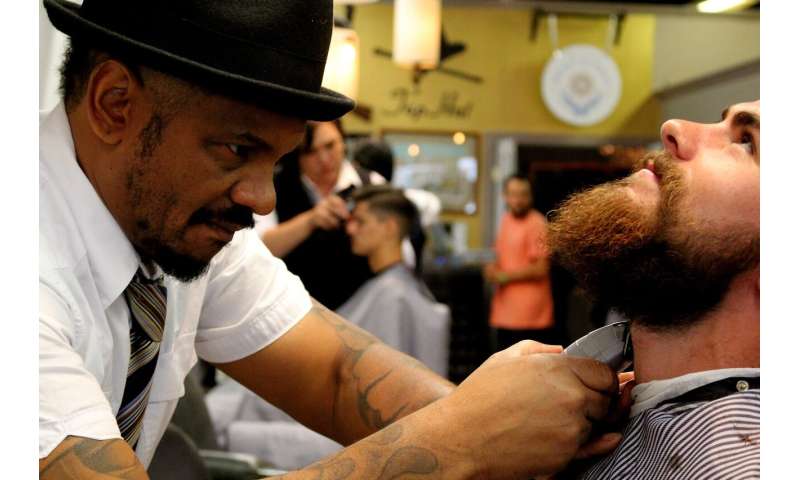 A national program to fight high blood pressure by sending pharmacists to black barbershops could prevent thousands of strokes, heart attacks and deaths, and save the health care system $870 million a year, a new analysis shows.

The research, led by Dr. Dhruv S. Kazi of the Smith Center for Outcomes Research in Cardiology at Beth Israel Deaconess Medical Center in Boston, built on the work of the late Dr. Ronald G. Victor. Victor’s studies showed the effectiveness of having barbers introduce their longtime customers to an on-site pharmacist, who tested patrons’ blood pressure and prescribed medicine to lower it if necessary.

High blood pressure rates for African Americans in the U.S. are among the highest in the world, and large-scale efforts have struggled to address the problem. But men who took part in a barbershop study in Los Angeles were able to reduce theirs by an average of 21 points more than the control group.

Black barbershops serve as community centers “where black men show up every three to four weeks,” Kazi said. “They have a close relationship with the barber. It’s a place of trust. And in that place of trust arrives a pharmacist, who they get to know, who they work with closely. Then they begin to trust the pharmacist.”

Kazi, working closely with Dr. Kirsten Bibbins-Domingo of the University of California, San Francisco, used those local findings and calculated the clinical and economic effects if the program were tried nationally. They estimated barbershop-based pharmacists could reach more than 822,000 men a year. They would prevent more than 1,300 deaths from heart disease, 1,600 heart attacks and 5,100 strokes.

That would save the health care system $870 million—a figure that doesn’t include additional money that would be saved by averting productivity losses incurred by people who have a heart attack or stroke, or family members and friends who care for them. It also doesn’t include the costs of creating such a program.

But researchers estimate it could pay for itself if the program cost $597 per person per year to implement.

The preliminary research was presented last month at the American Heart Association’s Scientific Sessions in Philadelphia.

Kazi said the barbershop model’s impressive savings come from getting people on higher doses of blood pressure medication more quickly than traditional methods by eliminating barriers such as scheduling clinic visits or requesting refills (both of which were taken care of by the pharmacist). Improved rates of blood pressure control also lead to fewer costs from strokes, heart attacks, and episodes of heart failure. The savings persist even when factoring in the cost of people living longer, and therefore have additional health care costs.

“Strokes are expensive,” Kazi said. “So … an intervention that can help avert them is likely to be cost-effective—and we should be willing to pay for it.” Orly Vardeny, associate professor of medicine at the Minneapolis VA Health Care System and University of Minnesota, said the research showed that if a barbershop-based program could indeed be reproduced nationally, “then the potential public health impact could be large and impressive.”

But there are potential barriers, she said, including getting the support of payers in the health care system, and working out logistical issues, such as training for all the pharmacists involved.

There are also matters of policy and perception about seeing pharmacists as front-line medical providers and not just dispensers.

“Over the last three decades, the role of pharmacists as clinicians has expanded widely,” Vardeny said. “To actually see data like this is exciting and should stimulate more research into this area.”

Kazi acknowledged those and other barriers, including how to get pharmacists into barbershops, compensating shop owners for their time, and monitoring and evaluating the program when scaled up.

“This is a very high-touch, multi-component intervention,” he said, one that would require local leadership to find what works best. “But if it is successful, it might be adaptable to other settings, other communities or even other health issues, such as screening for cancer.