I remember the first time I went to the doctor for the intense stomachaches. It was March of 2010, and the crazy bloating in my upper abdominals had gotten so bad, I couldn’t eat or drink anything. The doctor told me it was only constipation and to take a laxative.

Soon, worse stomach pangs woke me in the night. My upper abdominal area was humongous: My stomach puffed out between my ribs. My mom called 911, and an ambulance took me to the hospital. After some scans, they told me I had pancreatitis. They also said I had ulcerative colitis, a form of inflammatory bowel disease (IBD) that develops when the colon and rectum become inflamed.

My mom was in the room with me and started to cry, which made me nervous, so I started to cry too. I had no idea what either condition was. I spent a week in the hospital, and while the pancreatitis went away, I continued taking medication for the ulcerative colitis for three more years.

In October 2013, out to dinner for my 24th birthday, I suddenly got a wicked stomachache. I went home and was unable to leave my bathroom—the diarrhea would not stop. I called my gastroenterologist, and he put me on a higher dose of medication. In the next two months, I gained 20 pounds, my face turned into the shape of a full moon, my hair started to fall out, and my energy was zapped.

I gained 20 pounds, my face turned into the shape of a full moon, and my hair started to fall out.

The symptoms steadily got worse. I had no appetite, I was nauseous all the time, painful sores developed in my mouth, and my arm and leg joints began locking up. I started losing weight because everything passed right through me. There were days when I felt too sick to leave my bathroom, let alone my house. When I finally did go back to my restaurant job, I had to ask others to watch my tables so I could go to the bathroom every 15 minutes.

After numerous trips back to the hospital, my doctors eventually figured out I had Crohn’s, not ulcerative colitis. The latter only affects the colon, while Crohn’s, which is also a type of IBD, can affect any part of your GI tract. The doctors kept trying different treatments, but I grew sicker. I lost some 40 pounds from my 5-foot, 6-inch frame, dropping my weight into double digits. Mentally, I lost interest in doing anything. It felt like I was going through hell.

Facing life with the bag

Toward the end of 2015, I learned that the disease was causing the muscles in my colon and around my pelvis to deteriorate and weaken. My surgeon worried about incontinence. She told me she could attach a temporary ileostomy bag—picture a pouch the size of a splayed-out hand—to my small intestine, as a way to give my colon and break and help it heal. She said we’d keep it attached for six months. In order to attach the bag (which would sit outside my body near my hip), I’d have to have an operation to create a stoma, which is an opening in the stomach that allows waste to leave your body.

I was devastated. When I was first diagnosed with Crohn’s, I read about people needing bags, and I’d asked my gastroenterologist if I would ever need one—he’d told me not to worry about it. And now? I spent the rest of the day crying and refused to see anyone. 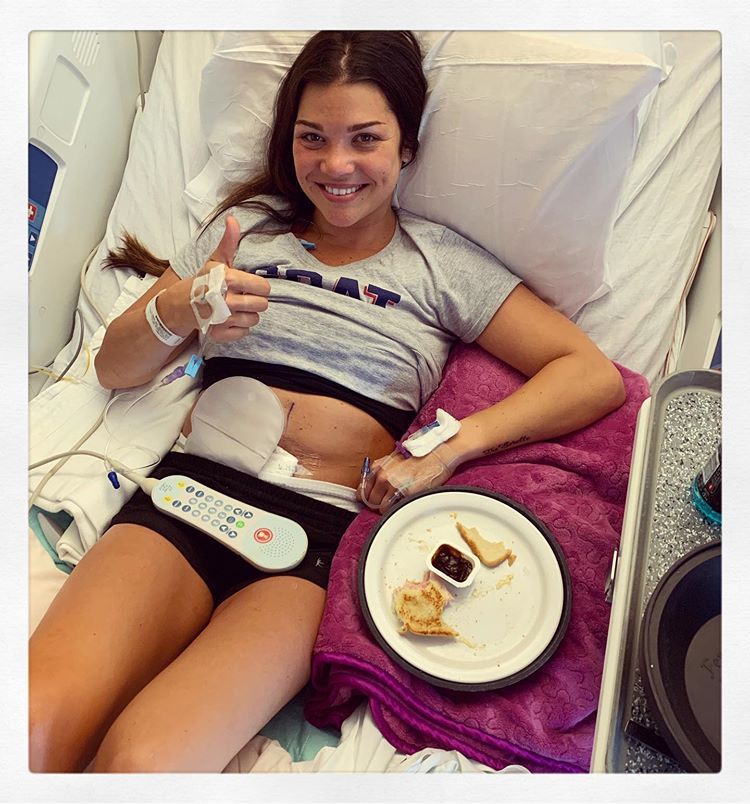 Here I am posing with my ileostomy bag after one of my many surgeries. (It’s the external pouch resting on my hip.) I had to stay away from solid foods for a few days, so when I was finally told I could really eat, I immediately ordered baked chicken tenders, tater tots with barbecue sauce, and half of a grilled ham and cheese sandwich. I couldn’t finish it all, but it tasted amazing.
Melissa Dow/Instagram

I started looking up photos of people with a bag. Incredibly, the first article I saw was about young models who had them. I thought, “If they can live with this and be open about it, I can too.” I went on Facebook and joined Crohn’s support groups. When I posted a comment about getting a temporary ileostomy bag, the positive responses I received from strangers were overwhelming.

Still, the next morning when the nurse came in to draw where the bag would go on my stomach, I was upset all over. It was real now. The nurse put the bag on me so I could see what it would be like, and she showed me how to change it. The bag would attach to a stoma—a quarter-size opening in the wall of my abdomen. (The first time I looked at mine after the procedure, I blacked out.) When I ate, the thin, liquid waste from my small intestine would pump into the bag, and then I would have to empty, clean, and change it. Every day.

How would I ever get used to this?

When it came time for a check-up exploratory surgery four months later, I was pumped. I was getting the bag off! When I woke up from surgery, though, it was déjà vu: My mom was crying. My surgeon told me my colon was getting worse, not better, and that I would have to have my colon removed and live with the bag the rest of my life. Shock hit, then anger. 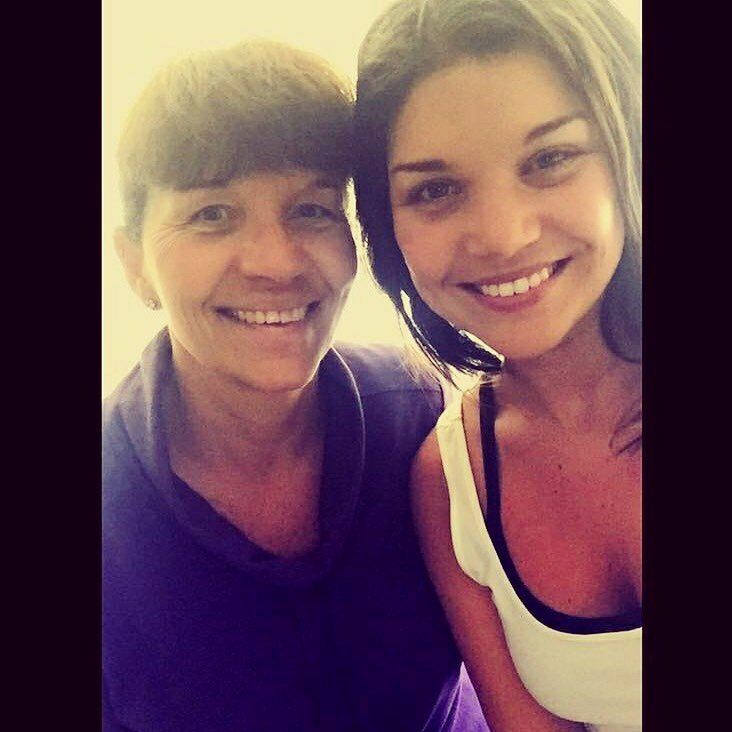 This photo of my mom and I was taken the day before my colon was removed. My mom is my biggest support—I could not have gotten through any of this without her.
Melissa Dow/Instagram

In October 2017, surgeons removed my colon, and made the bag permanent. After the procedure, I was completely drained—physically, mentally, and emotionally. Depression took over. I spent a lot of time alone in my room at home, and I pushed friends away because I was worried they’d look at me differently. I’d also just broken up with my boyfriend, and now with the bag, I wondered if I’d ever have one again. I felt so uncomfortable with my body.

It took six months, and the help of a therapist I started seeing in 2013, to begin to see the positives of living with my ileostomy bag. I realized I had missed out on so much during all those years I spent in the bathroom—I was going up to 30 times a day. Not only could I not eat foods I loved like corn, nuts, and red meat because they’d upset my stomach, I always had to know where the restroom was everywhere I went. I was an early 20-something who had accidents in public.

I’d just broken up with my boyfriend, and now with the bag, I wondered if I’d ever have one again.

With the ileostomy bag, though, my digestive contents automatically just left my body through my stoma and went into my bag. So I didn’t have to worry about being near a restroom 24/7. When the bag feels like a little waterbed on my stomach, I know I need to empty it. Before I got the bag, I would often wear a tight cami underneath my clothes, and I still do this to hold the bag close to my body—people can’t even tell I have it.

Now, four years after my colon removal, I go out to dinner and don’t worry about having to run to the bathroom after my first bite. I go to the beach—with a bikini on—even if there isn’t a bathroom. I’m also dating. I don’t feel sexy with my bag, but it doesn’t get in the way of being intimate, and it hasn’t bothered the two boyfriends I’ve had since getting it. Once I’m comfortable with someone, I don’t care about the bag. It’s part of my body. 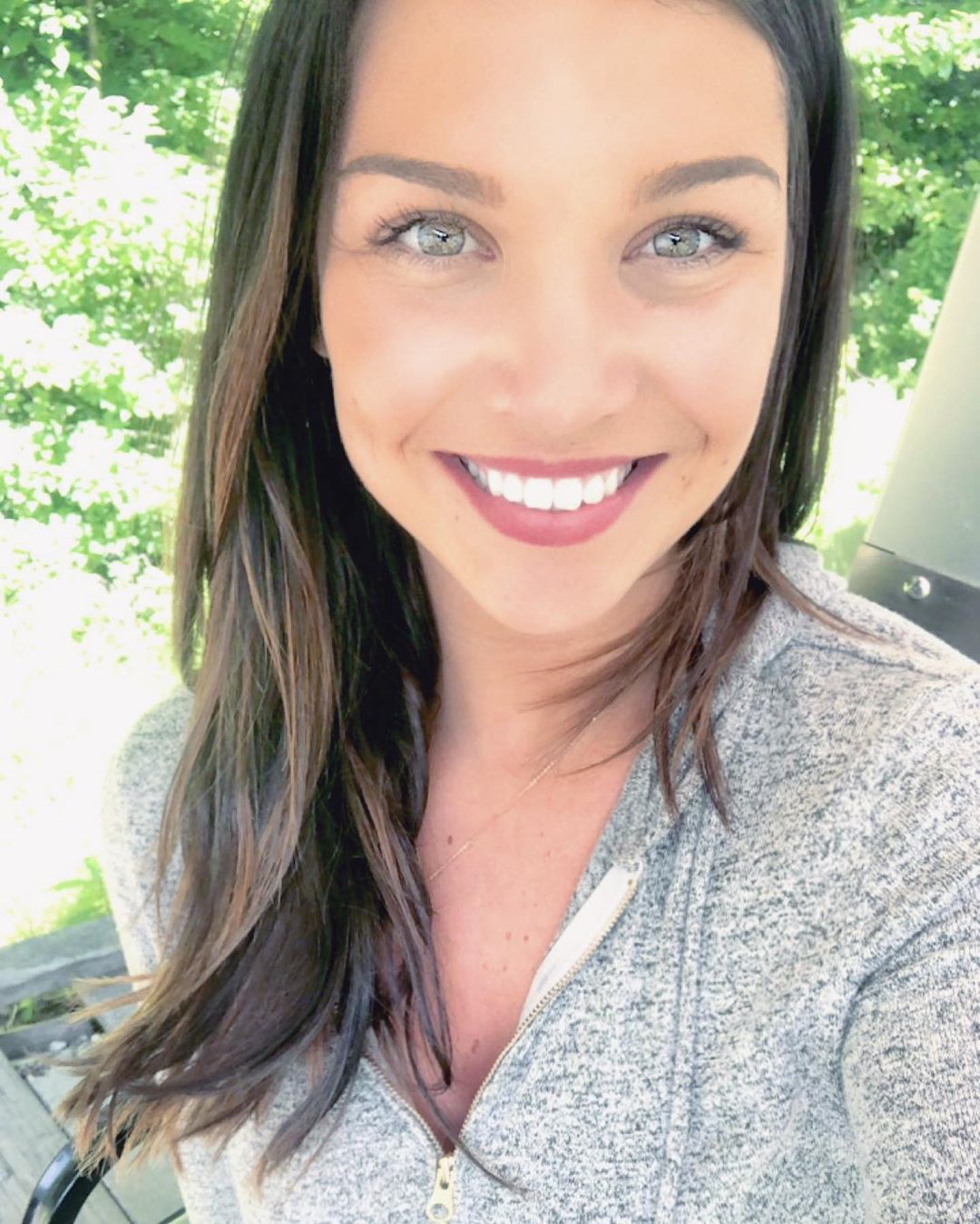 After all my surgeries and four years of wearing the bag, I finally feel like myself again.
Melissa Dow/Instagram

Crohn’s never goes away, so it’s not like everything is fine now. My body is still exhausted from all the operations. I had to quit working last May because of the pain, and I don’t have the energy to go back yet, as much as I’d like to. It feels so good to have my life back, though—to feel like myself again.

I volunteer once a week at the hospital where I had all of my surgeries. I think I’d like to work in the medical field. No matter what I do, I know that having this disease has made me stronger, and that this bag saved me. I would never want to go back to not having it.