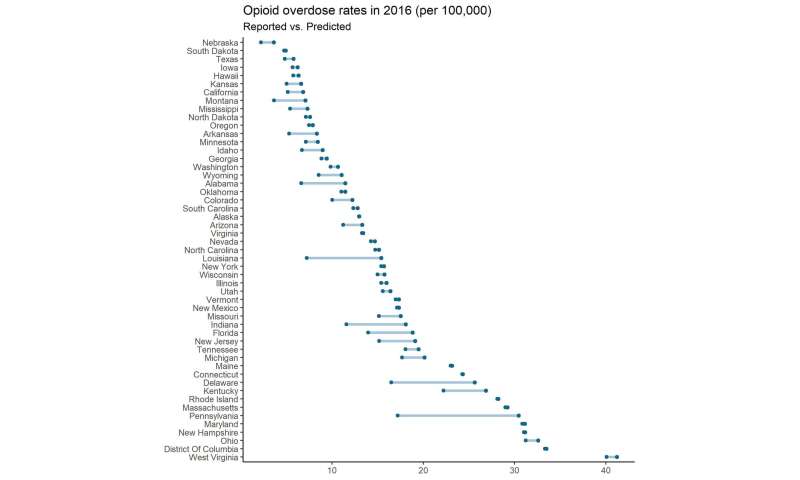 New research appearing in the journal Addiction shows that the number of deaths attributed to opioid-related overdoses could be 28 percent higher than reported due to incomplete death records. This discrepancy is more pronounced in several states, including Alabama, Mississippi, Pennsylvania, Louisiana, and Indiana, where the estimated number of deaths more than doubles—obscuring the scope of the opioid crisis and potentially affecting programs and funding intended to confront the epidemic.

“A substantial share of fatal drug overdoses is missing information on specific drug involvement, leading to underreporting of opioid-related death rates and a misrepresentation of the extent of the opioid crisis,” said Elaine Hill, Ph.D., an economist and assistant professor in the University of Rochester Medical Center (URMC) Department of Public Health Sciences and senior author of the study. “The corrected estimates of opioid-related deaths in this study are not trivial and show that the human toll has been substantially higher than reported, by several thousand lives taken each year.”

Hill and her team—including co-authors Andrew Boslett, Ph.D., and Alina Denham, M.S., with URMC—found that almost 72 percent of unclassified drug overdoses that occurred between 1999-2016 involved prescription opioids, heroin, or fentanyl—translating into an estimated 99,160 additional opioid-related deaths.

Hill and Boslett first stumbled upon the discrepancy while studying the economic, environmental, and health impacts of natural resources extraction. Many regions of the country hit the hardest by the opioid crisis overlap with areas associated with shale gas development and coal mining. As a part of her research, Hill was attempting to determine whether the shale boom improved or exacerbated the opioid crisis. However, as they started collecting data, they discovered that close to 22 percent of all drug-related overdoses where unclassified, meaning the drugs involved in the cause of death were not indicated.

A medical examiner or coroner becomes involved during any sudden and unexpected death of an otherwise healthy person and anyone suspected to have died from an unnatural cause. Under ideal circumstances, the cause of death is identified through a combination of evidence collected at the scene, a toxicological analysis of blood or tissue, and an autopsy. If the cause is determined to be drug-related, either accidental or a suicide, then the specific drugs identified in the person’s system are recorded on the death certificate.

However, in practice, this process is expensive and time-consuming, dependent upon the resources and staffing available to the specific medical examiner’s office, and potentially influenced by family members due to the stigma associated with opioid use. Additionally, the requirements to serve as a medical examiner or coroner varies nationally. In some states, the office is an elected position with no prerequisite for professional experience or training in forensic pathology.

In the study, Hill and her colleagues obtained death records of individuals identified as having died from drug overdoses from the National Center for Health Statistics, part of the Centers for Disease Control and Prevention. In addition to the cause, the records also include any additional medical issues that might have contributed to the death. Employing a statistical analysis, the researchers were able to correlate the information in the death records of unclassified overdose deaths with contributing causes associated with known opioid-related deaths, such as previous opioid use and chronic pain conditions.

While the overall percentage of unclassified deaths declined over time, a phenomenon that the researchers speculate is due to a more focused effort by federal, state, and local officials to understand the scope of the crisis, in several states, the number remained high. The new estimates of actual opioid-related deaths show a pronounced increase in states like Alabama, Mississippi, Pennsylvania, Louisiana, and Indiana. In fact, in each of these states, the number of opioid-related deaths increased by more than 100 percent.

In Pennsylvania, for example, the number of reported opioid-related deaths was 12,374. The study estimates the actual number of deaths was 26,586. Consequently, the state’s total number of deaths in places it behind only California and Florida, states with significantly higher populations, and moves Pennsylvania from fifteenth to sixth in terms of highest per capita death rates in 2016.