Mallika Sherawat shared a clip on social media of her practising Iyengar Yoga. In the video, she is seen attempting the correct posture for Uttanasana or standing forward bend pose. 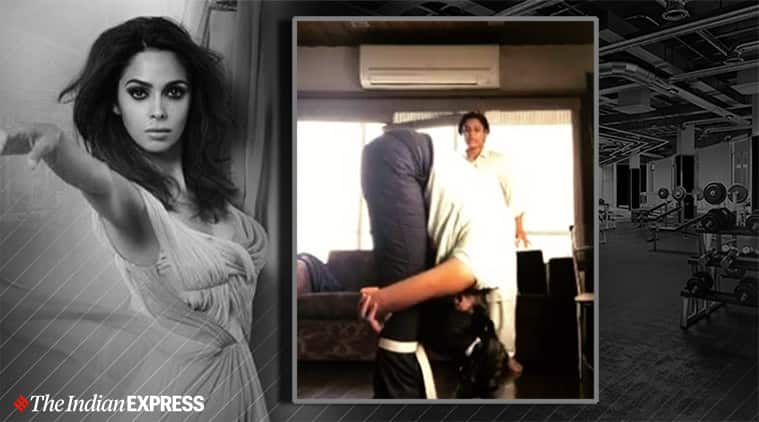 Actor Mallika Sherawat has been setting some major fitness goals by giving a peek into her exercise regime on her Instagram page. This time, the actor — who regularly shares fitness updates — shared a clip of her practising Iyengar Yoga. In the video, she is seen attempting the correct posture for Uttanasana or standing forward bend pose.

In another video shared later, she is seen doing backbend with a belt. Props such as belts or blocks are commonly used in performing Iyengar Yoga, enabling those with physical constraints to perform the postures correctly. In fact, this is where it differs from other forms of yoga styles, apart from its precision and sequence of asanas.

Practicing Backbends wt my yoga teacher Jyoti, I love using yoga props like the belt etc , here the belt is supporting my back during the backbend #yoga #tuesdaytransformation #backbend #iyengaryoga

What is Iyengar Yoga?

Iyengar Yoga was founded and popularised by BKS Iyengar, who is also attributed for the popularisation of yoga in the West. What also caught massive attention was his bestselling book, Light on Yoga in 1966, which describes over 200 asanas in “unprecedented” detail.

Another important step was the founding of the Ramamani Iyengar Memorial Yoga Institute in Pune in 1975, and later the Iyengar yoga Institute in London in 1983. Interestingly, the institute in Pune, which is now run by the yoga guru’s son, daughter and granddaughter, reportedly does not have certified teachers. They rather believe in giving informal permission to a disciple to teach as long as they proved their merit.

How is Iyengar Yoga practised?

Iyengar Yoga typically focuses on structural alignment of the physical body through the asanas. Unlike a regular yoga class where the beginner usually learns a posture by imitating the teacher, Iyengar yoga involves active explanation and correction of the alignment, something you will notice in Mallika’s videos too.

The postures are held for a long period of time, which allow muscles to relax while encouraging awareness in the pose. Props are definitely an intrinsic part of the yoga style to help students perform the asanas correctly.

Iyengar Yoga asanas you can try

Amina Bharat Ram, a certified Iyengar yoga teacher from Iyengar Yogamandala, told indianexpress.com, “For Iyengar Yoga, we always start with the standing poses. The way that we stand is incorrect. The standing poses make the foundation strong. So, one starts with Tadasana or the mountain pose, to strengthen the base, followed by others like Trikonasana (triangle pose) and Virabhadrasana (warrior pose).”

This tutorial might help you start Iyenger Yoga asanas:

Iyenger Yoga does not just increase flexibility and calm your mind, but by laying emphasis on alignment, it significantly improves posture. It regulates breathing and other body functions, from circulatory system to nervous system and digestion.

“Iyengar Yoga makes you aware of your body. Alignment of the mind and body is very important in Iyengar Yoga. When there is proper alignment, your breathing improves and your mind is at peace,” said Amina.

For all the latest Lifestyle News, download Indian Express App