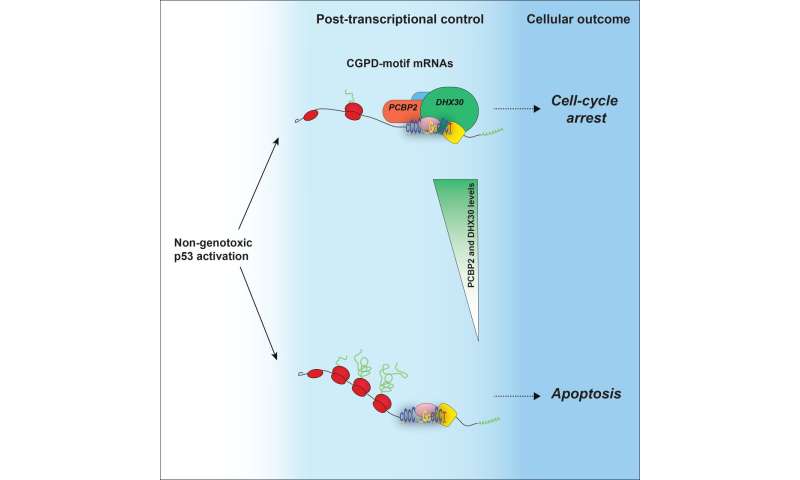 There is an ongoing battle between cancer cells and p53, the protein known as “the guardian of the genome,” and a study conducted at the University of Trento has identified a number of factors that influence the outcome of this battle and therefore the effectiveness of cancer treatments.

Scientists explore two therapeutic cancer treatment scenarios: In one scenario, cancer cells stop proliferating; in the other, their death rate increases. Both of these outcomes are regulated the protein p53. Based on the new findings, a specific factor, a protein known as DHX30, determines how p53 can lead cancer cells to their death. That is the conclusion reached by a team of researchers of the University of Trento, who focused on a new molecular mechanism that works like a switch.

Erik Dassi, member of the research team, said, “When cancer cells are treated with a certain drug, it is the action of this switch (DHX30) that makes them to go toward cell death and not in the direction of cell cycle arrest.”

Alberto Inga, from the same team, said, “The drug activates p53, which oversees the various pathways of cancer cells. Scientists have thought for decades that we could make cancer cells take the direction of programmed cell death by intervening ‘upstream’ of p53.”

Dario Rizzotto, first author of the study, said, “What we argue, instead, is that a significant part of that decision is made ‘downstream’ of p53. In other words, the activation of p53 in cancer cells can lead to a number of possible responses in the cells; the ‘switch’ that we identified regulates the response that could be the most important for therapeutic reasons. When there is no interaction between DHX30 and relevant mRNAs, cancer cells die.”

This could lead to more tailored and effective molecular treatments, especially to treat some types of tumors, for example, solid tumors in the colon, breast and lungs.