Cruellest twist of my mastectomy: Mother, 34, had preventative surgery after three women in her family developed cancer – but now she is so low risk the NHS won’t test her daughters

With her mother, aunt and grandmother all diagnosed with breast cancer, Tara Huck didn’t hesitate when she was offered a mastectomy to prevent her developing the disease, too.

At the time of her surgery three years ago, breast cancer had taken a heavy toll on Tara’s family: her newly diagnosed mother went on to die of the disease aged 56, her aunt had died at just 28 and her grandmother had been diagnosed in her 50s.

None of the women tested positive for faulty versions of well-known breast cancer genes such as BRCA1 and BRCA2, which can increase the lifetime risk of developing the disease, yet there was a clear family history. Doctors believed an unidentified faulty gene could be responsible. 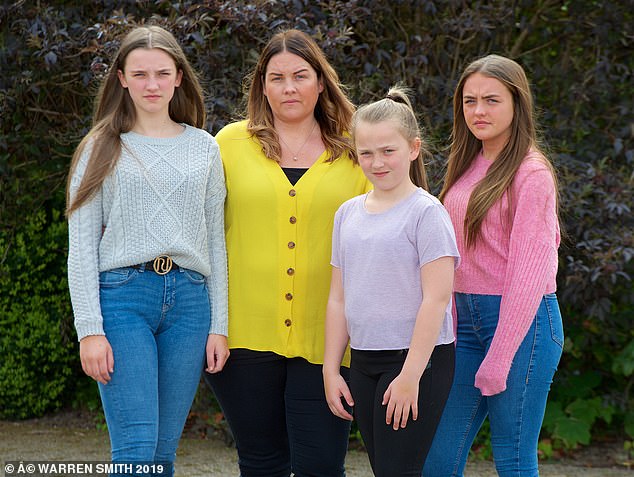 Tara Huck with her daughters (left to right) Katie, 13, Tara, Molly, 11, and Emily, 15. As her risk of developing breast cancer is now very low, her three daughters are no longer considered at high risk of the disease under NHS guidelines

So in September 2016, Tara, now 34, underwent a double mastectomy followed by reconstructive surgery. 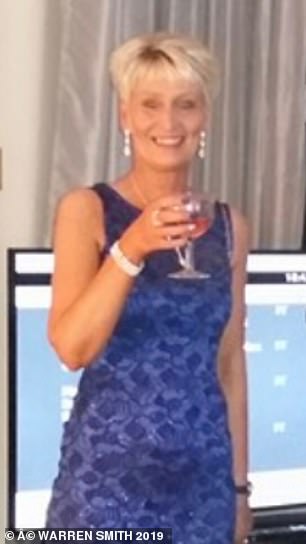 Tara’s mother Julie Cragg. Her newly diagnosed mother went on to die of the disease aged 56

‘It was a no-brainer, I knew it was the right thing to do,’ says the mother-of-three from Poulton-le-Fylde, Lancashire, who runs a nursery and is married to Danny, 35, a builder.

‘Tests couldn’t pinpoint a specific gene that might be causing the cancer in our family, so I was told I wouldn’t be screened until 50, the national screening age,’ she says.

‘It was scary because while I knew I was at risk, doctors didn’t know which gene was responsible so I didn’t know if I would also get it.’ She was immediately offered a mastectomy after her mother’s diagnosis in 2015, however.

Breast cancer kills 11,500 Britons a year. Around 4 per cent of breast cancers are caused by faulty genes. The vast majority are thought to be related to other factors including age, obesity, alcohol intake, age of first period and the menopause.

Women with a faulty BRCA or TP53 genes (another mutation that can cause breast cancer) are considered at high risk of developing the disease, according to the National Institute for Health and Care Excellence.

This means they have a greater than 30 per cent chance of developing breast cancer, compared to 10 – 12 per cent in the general population.

A strong family history of breast cancer (without testing positive for these faulty genes) can also put you at high risk; usually that means at least two first degree relatives (for example, a mother, sister or daughter) with a diagnosis under the age of 40, or three under the age of 60. Tara fell into this category.

However, women under 40 are offered extra checks for the disease only if they’re found to carry the BRCA or TP53 gene faults. This involves yearly breast screening from the age of 30, MRI scans to check their breasts up to the age of 50 and, in some cases, a preventative mastectomy.

Women with a moderate risk, between a 17 per cent and 30 per cent chance of developing breast cancer over their lifetime, qualify for annual mammograms from 40. 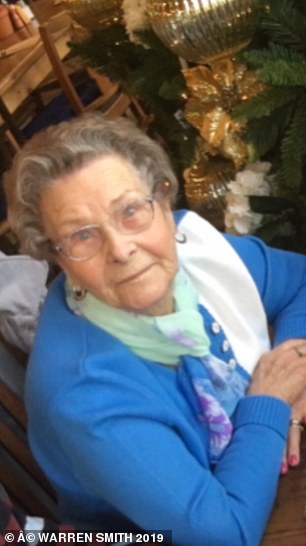 Tara’s grandmother Majorie Smith who was diagnosed in her 50s

But Tara is now living with an unforeseen consequence of her decision to have a mastectomy.

As her risk of developing breast cancer is now very low, her three daughters — Emily, 15, Katie, 14, and Molly, 11 — are no longer considered at high risk of the disease under NHS guidelines.

‘This means my daughters won’t be screened before the age of 50 and won’t be offered surgery,’ says Tara. ‘If I’d known there would be repercussions for the girls, I probably wouldn’t have had surgery. It makes me really angry.

‘I want them to be offered the chance of preventative mastectomy so this disease doesn’t affect another generation of our family.Emily is already in fear of what the future holds. Will she have to get cancer to be considered high risk?

‘It took my mum’s life to save mine, but by saving mine there’s a high chance I’ve put my daughters at risk of losing theirs.’

In fact, only about 2 per cent of inherited breast cancers are due to the faulty BRCA genes that are traditionally tested for, according to Professor Gareth Evans, a consultant in medical genetics at Manchester University.

‘There are an additional seven moderate to high-risk genes, and hundreds of others which, in combination, may increase the risk of developing the disease.’ However, he says: ‘Even if a gene is identified, a daughter would have a lower risk than the mother because there is only a 50 per cent chance she has inherited it’.

NHS figures show the numbers considering a preventative mastectomy doubled between 2010 and 2017. So is there a way of preventing some women undergoing unnecessary mastectomies?

Professor Evans’s research has found that when women with a strong family history of breast cancer do not have the faulty BRCA gene, they often instead have a pattern of small gene fragments — also known as single nucleotide polymorphisms (or SNPs) — that increase their risk.

The research, published in the Journal of Medical Genetics in 2017, suggests that each mutation individually had minimal effect; but, combined, they could increase or decrease the breast cancer risk considerably.

‘It looks like 27 – 30 per cent of breast cancers have an inherited component — not a single faulty gene, but a pattern of changes in some 300 genetic locations and we all carry some of them but they aren’t picked up on standard gene tests,’ says Professor Evans.

‘Having a certain pattern of these genes can increase the risk of breast cancer four-fold — well beyond the 30 per cent NICE threshold above which extra checks and preventative surgery are offered.

‘SNP testing will substantially change an individual’s risk of developing breast cancer for 50 per cent of the population,’ says Professor Evans. ‘Many people can be reassured with a genetic test that their risk is very low.

‘But it also allows us to identify those at higher risk, target them with more regular breast scans to pick up the disease earlier and improve their outcomes — for example, by suggesting weight loss or prescribing a drug such as tamoxifen to prevent cancer. It will also help women at risk of inherited breast cancer to make more informed decisions about whether to have a preventative mastectomy.’

The SNP test, which can be done with a small sample of blood or saliva, is 99 per cent accurate and based on the genetic profiles of 12,000 women from the general population and those with a high risk of breast cancer.

plans to introduce the SNP test on the NHS have been delayed, however — ‘probably because there is an initial upfront cost and the savings will come later’, says Professor Evans.

‘We should be offering this test to all women, eventually even those without a strong family history, when they first go for screening, ideally aged 40, so that those identified at moderate risk can get extra screening.’

Wendy Watson, founder of the National Hereditary Breast Cancer Helpline, believes these tests could help women like Tara, with no identified gene fault but a strong family history.

‘The tragedy is that there are tests that could help here, but are currently not even on the radar for commissioning,’ she says.

For Tara, having her daughters undergo the SNP test could give her — and them — some peace of mind. ‘It would ease the huge concern of the unknown that I have for my girls’ future which makes me feel sick inside,’ she says.

Bad, Good, Best: How to get the most out of blueberries

A typical blueberry muffin has around 300 calories and four-and-a-half teaspoons of sugar — 60 per cent of your daily limit. At the very most, one muffin will only contain enough blueberries to count as a quarter of one of your five-a-day.

A compote makes it easier to eat a larger portion of blueberries, which contain anti-inflammatory compounds called anthocyanins. But heating too long can degrade these compounds, so cook them gently and don’t add sugar.

Getting a wide range of phytochemicals and antioxidants (thought to help keep the heart and immune system healthy) is best, and can be achieved by eating a mix of fruit of different colours. The colours indicate different antioxidants.