A mother-of-five contracted a deadly blood infection from a tampon which left her in intensive care for four days.

Greta Zarate, of Jacksonville, North Carolina, first came down with flu-like symptoms on the first day of her period on January 31.

The 32-year-old was rushed to Onslow Memorial Hospital four days later when her fever spiked and her blood pressure plummeted.

Mrs Zarate was admitted to intensive care, where X-rays, ultrasounds and CT scans failed to spot the cause of her declining health.

The condition had left the mother with dangerously low blood pressure and a high fever.

Her immune system went into overdrive to combat the infection, which plunged her body into septic shock, a stage of sepsis which sees the body attack its own organs.

Medics revealed the potentially-fatal bacteria festered on the build-up of blood on her tampon. It then entered her bloodstream through microscopic cuts on her vaginal wall. 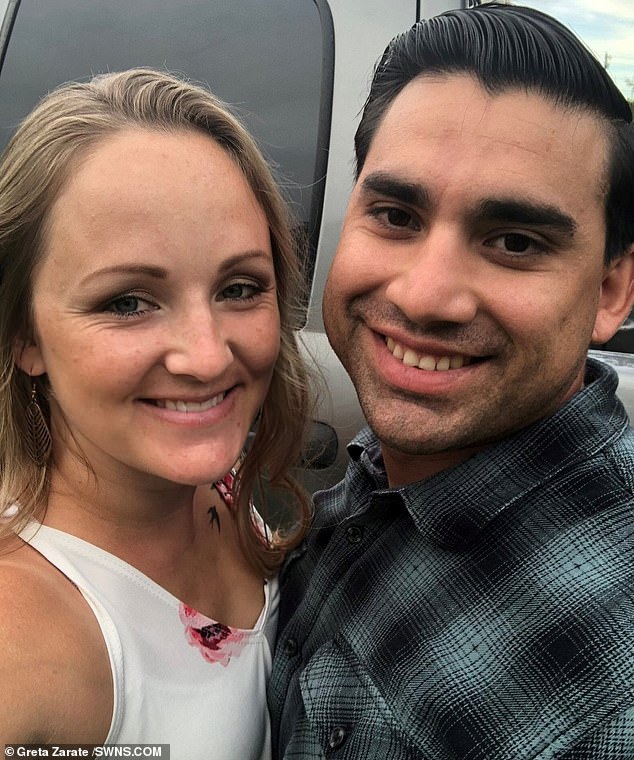 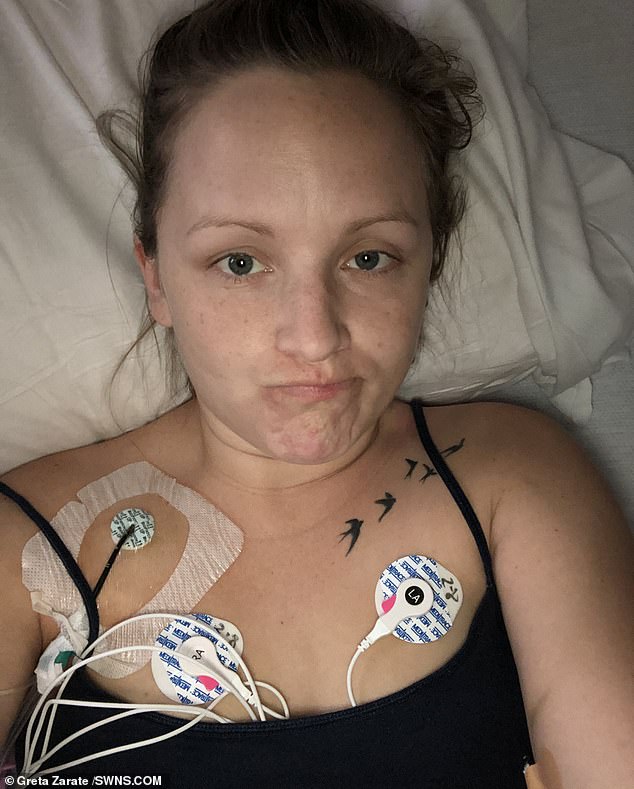 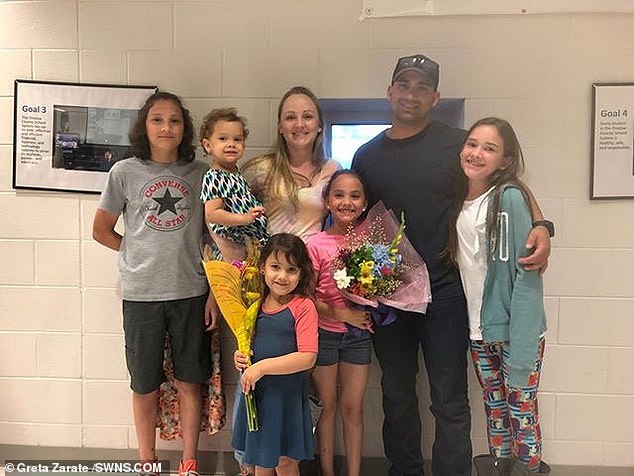 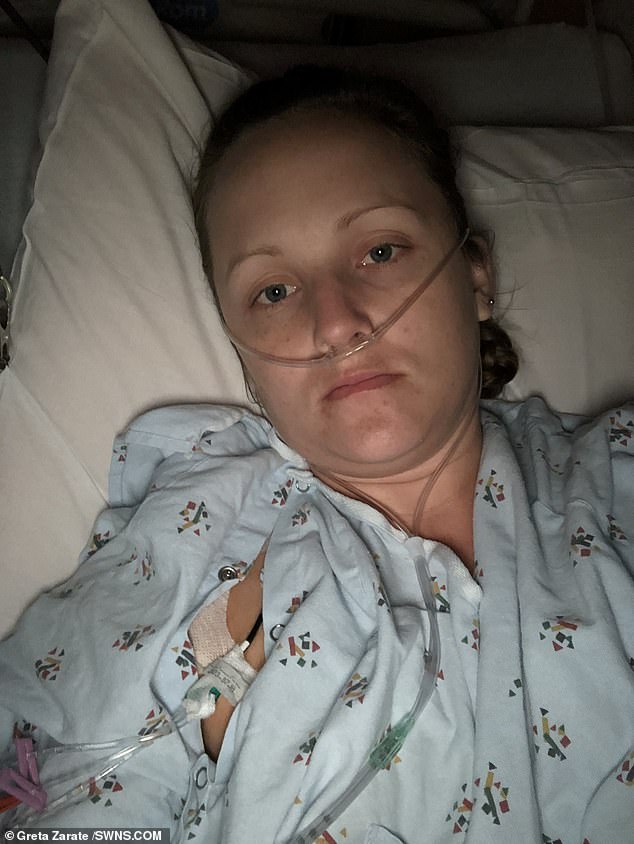 The stay-at-home mother, from Jacksonville, North Carolina, was rushed to hospital on February 3 when her fever spiked and her blood pressure plummeted

Mrs Zarate said: ‘I had heard of toxic shock syndrome but I never knew the symptoms.

‘On the first day of my period, I was feeling a little crumby. I was in bed for three days.

‘I believed I had the flu and I was treating myself with over the counter medication. I suffered all of the symptoms of TSS but I confused it for the flu – nausea and diarrhoea, dizziness, achey muscles.

‘The only thing I didn’t get was a rash which is often a symptom of it. But I was getting sicker and sicker. My fever was so high, I was shaky and weak.’ 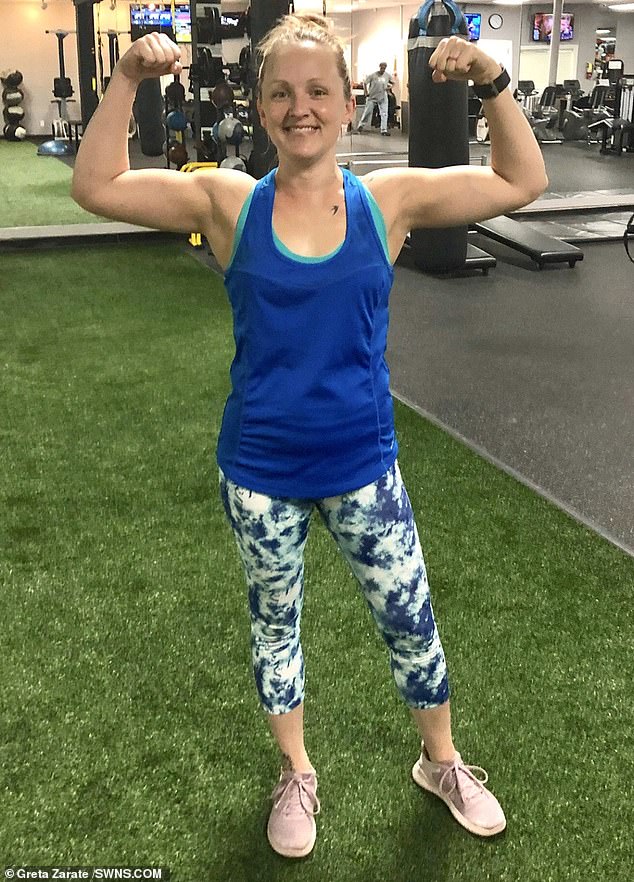 Fighting fit: Mrs Zarate is back in the gym and has made a full recovery after her brush with death in February 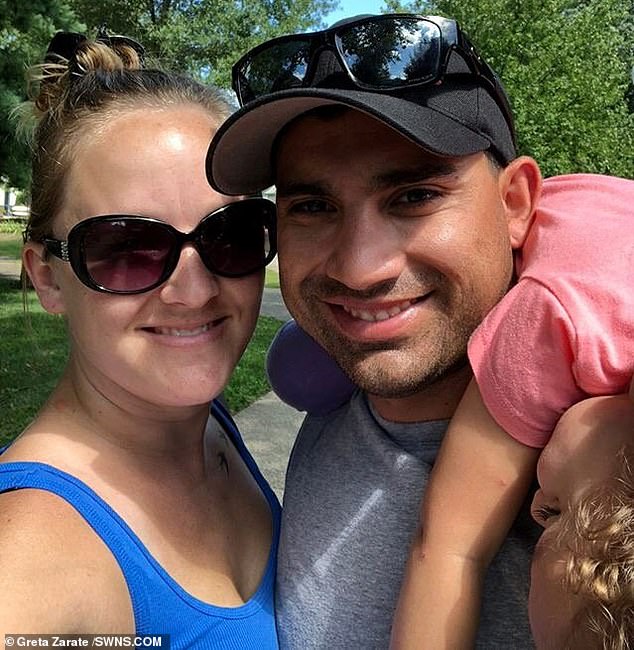 Her husband Cas, 30, a military logistics chief, rushed to be by her side as she battled her illness 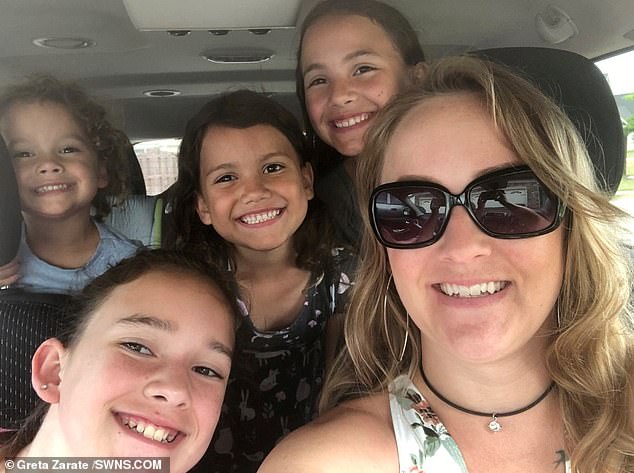 The mother enjoys family life with her children, from left to right, Bree, three, Zoie, six, Nayeli, 10 and Lezley, 12

WHAT IS TOXIC SHOCK SYNDROME?

Toxic shock syndrome is a highly dangerous bacterial infection – but it can be misdiagnosed because the symptoms are similar to other illnesses and because it is so rare.

It occurs when usually harmless staphylococcus aureus or streptococcus bacteria, which live on the skin, invade the bloodstream and release dangerous toxins.

TSS’ prevalance is unclear but doctors have claimed it affects around one or two in every 100,000 women.

It has a mortality rate of between five and 15 per cent. And reoccurs in 30-to-40 per cent of cases.

Symptoms usually begin with a sudden high fever – a temperature above 38.9°C/102°F.

Within a few hours a sufferer will develop flu-like symptoms including headache, muscle aches, a sore throat and cough.

Women are most at risk of getting toxic shock syndrome during menstruation and particularly if they are using tampons, have recently given birth or are using an internal barrier contraceptive, such as a diaphragm.

While tampon boxes advise to change them between four to eight hours, it is common for women to forget and leave them in overnight.

Treatment may involve antibiotics to fight the infection, oxygen to help with breathing, fluids to prevent dehydration and organ damage, and medication to control blood pressure.

Dialysis may also be needed if the kidneys stop functioning.

In severe cases, surgery may be required to remove dead tissue. In rare incidences, it may be necessary to amputate the affected area.

To prevent TSS, women should use tampons with the lowest absorbency for their flow, alternate between a tampon and a sanitary towel, and wash their hands before and after insertion.

Tampons should also be changed regularly, as directed on the packaging – usually every four to eight hours.

She added: ‘My sister is a nurse and she urged me to call someone and get to hospital. I called friends to take care of my kids and I was rushed to the ER in an ambulance.

‘When I got to the hospital they couldn’t figure out what was wrong with me.. My blood pressure was very low. I had X-rays and a CT scan.

‘I was scared and extremely ill. I had a serious pain in my side because my spleen was swollen from trying to fight the infection.

‘The only doctors they hadn’t consulted was gynaecology and it was a blessing that one of the nurses thought that it might be toxic shock because I had my period. She put two and two together.

‘They discovered it was a staph infection in my blood after taking a vaginal swab and it stemmed from microscopic cuts in my vagina from a tampon.’

Mrs Zarate was given antibiotics, fluids and morphine to fight the infection and manage her pain.

The stay-at-home mother underwent a blood transfusion to help restore her body’s red blood cells and to prevent the further spread of the infection.

Her husband Cas, 30, a military logistics chief, rushed to be by her side as she battled her illness.

‘They said if I waited another day it could have had dire consequences,’ said Greta, a stay-at-home mother.

‘People who get toxic shock syndrome can end up losing limbs or even dying so I do feel so lucky.

‘My sister flew in to take care of my kids and my husband was released from his training. He rushed home. In total I spent 11 days in the hospital and four in the ICU.’

Toxic shock syndrome, which affects around one in 100,000 women, occurs when usually harmless Staphylococcus aureus or Streptococcus bacteria, which live on the skin, invade the bloodstream and produce dangerous toxins.

It most commonly occurs in women using tampons because the build-up of blood makes the perfect environment for the rapid growth of bacteria.

Tampon boxes come with a warning of the deadly infection after leaving it in for more than eight hours.

The disease made headlines in the late 1970s and early 1980s after the deaths of several young women who were using a brand of super-absorbent tampon that was later removed from the market.

But Mrs Zarate said she regularly changed her tampons, and medics believed her TSS was caused by tiny cuts in her vagina.

She said: ‘When you pull a dry tampon out of your body, it actually leaves tiny scrapes on your vaginal wall which allow bacteria to enter your bloodstream and that’s what happened to me.

‘I change my tampon every time I use the bathroom, so I knew it wasn’t because I had left it in there for a long, long time.’