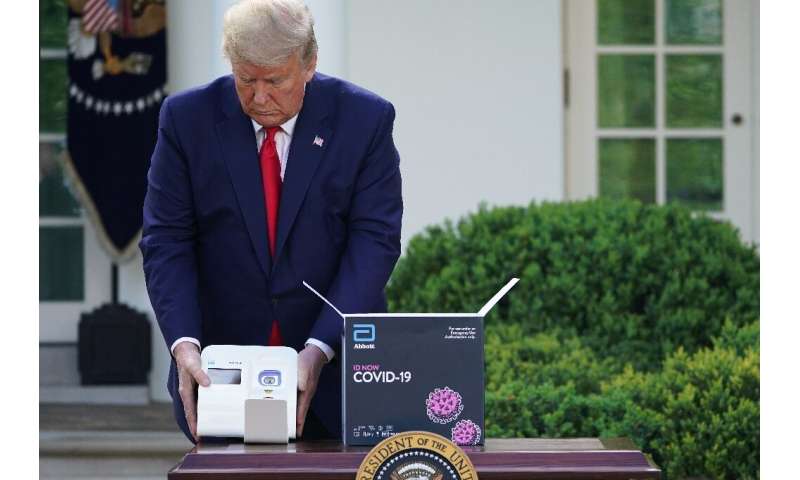 A rapid coronavirus test touted by President Donald Trump and used to test White House officials produces false negatives in almost half of all cases, according to new study by researchers at NYU Langone Health.

The test by Abbott Laboratories, which returns positive results in five minutes and negative in 13 minutes, was compared with machines that have a turnaround time of 45 minutes.

The researchers found that the Abbott test produced false negatives about a third of the time when virus sample taken using a nasal swab was transported in liquid solution, and 48 percent of the time when the swab was dry, which is the method recommended by the company.

The results of the study—which has not yet been peer reviewed and was posted on a medical preprint site—were contested by Abbott, which told AFP it was unclear that the samples were taken correctly.

“Abbott has distributed more than 1.8 million ID NOW tests and the reported rate of false negatives to Abbott is at 0.02 percent,” Scott Stoffel, a spokesman for the company said.

He added that another study from the University of Detroit had found the test to be 98 percent accurate.

The NYU study’s authors said they decided to investigate the test because the speed with which it produced results was seen as as useful for their own institution, particularly the medical center’s emergency department.

By comparison, a test made by Roche returns results in 3.5 hours while one by Cepheid takes 45 minutes, and both have similar reliability, said the study authors.

These tests look for the virus’ genetic material and use a method that quickly makes copies to amplify an initially small sample to a level that is detectable.

The authors wrote their study “revealed low sensitivity with high false negative results by Abbott ID NOW platform,” adding this raised concern about “its suitability as a diagnostic tool for symptomatic patients.”