Cancer growth can be slowed by eating prebiotic foods such as asparagus and onion which boost killer immune cells, study on mice suggests

Cancer growth can be slowed with prebiotic foods such as asparagus and onion, a study on mice suggests.

Prebiotics are a group of compounds that help boost the variety of gut bacteria, and are also found in garlic, leeks and bananas.

Scientists fed mice water infused with prebiotics and studied how the rodents fought melanoma skin cancer, one of the aggressive forms of the disease due to its ability to spread to so many organs.

For the first time, research showed how prebiotics populated the gut, which bolstered the immune system.

They believe prebiotics hold the potential to make ‘cutting-edge cancer treatments’ once studies on humans are conducted. 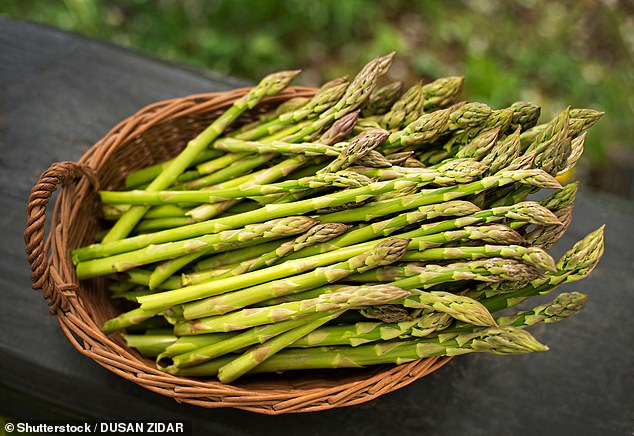 Cancer growth can be slowed with prebiotic foods such as asparagus and onion by boosting killer immune cells, a study on mice suggests

Dr Ze’ev Ronai, senior author of the study published in Cell Reports, said: ‘Earlier studies have demonstrated that prebiotics limit tumour growth, but until now the mechanism by which they do so has been unclear.

‘Our study shows for the first time that prebiotics limit cancer growth by enhancing anti-tumour immunity.’

The composition of our gut microbiota is partly determined by our genes but can also be influenced by lifestyle factors such as our diet.

Probiotics, which are live microorganisms, may benefit your health by changing the overall composition of the microbiota. They are found in a range of natural food sources, particularly fermented foods such as kefir.

Prebiotics, on the other hand, are ‘food’ for probiotics in the gut. They are not live organisms, but they help probiotics stimulate the growth of diverse gut populations.

Prebiotics work differently to probiotics as they help to feed the ‘good’ bacteria in the digestive tract.

Whereas probiotics only add beneficial bacteria to the gut to rebalance levels.

Prebiotics are a form of natural, indigestible starch found in small quantities in foods such as banana, onions, leeks, asparagus and Jerusalem artichokes.

And they can be added to a wider selection of foods than probiotics because they do not have the same storage problems as ‘live’ products.

As well as boosting bacteria levels, pre-biotics are thought to encourage the absorption of bone-strengthening calcium thanks to the way they are digested.

And this comes after a study found that prebiotics could help stressed people sleep easier at night.

Scientists from the University of Colorado Boulder pointed to onions, leeks and artichokes as being the main sources of the dietary fibers.

Alongside their already proven benefits of boosting gut health, they were found to release metabolic byproducts which influence the brain into overcoming worry and fear.

Inulin is a fiber found in plants like asparagus, onion, chicory and artichokes.

The researchers embarked on a series of studies that involved feeding healthy mice inulin in their chow.

Then they transplanted melanoma cancer cells into the mice to determine the effect of the prebiotic.

First, the team found the population of bacteria in the gastrointestinal tract, called gut microbiota, altered. This was driven by inulin.

Anti-tumour immunity was kickstarted, measured by how many white blood cells had infiltrated the tumour cells.

This indicated that the prebiotics enhanced the immune system’s ability to attack the cancer.

Growth of melanoma – the most common type of skin cancer – was slowed as a result.

The researchers wanted to look at other cancers other than melanoma. They found the growth of colon cancer cells were also inhibited by inulin feed.

‘The scientific advances we are making here are getting us closer to the idea of implementing prebiotics in cutting-edge cancer treatments.’

Some of the most exciting findings were in mice with NRAS mutations, found in around 20 per cent of melanoma patients.

The study found mice carrying NRAS-mutant melanoma that received inulin were able to delay the development of resistance to treatment with an MEK inhibitor.

Dr Jennifer Wargo, professor at University of Texas MD Anderson Cancer Center, said: ‘Immunotherapies and targeted treatments such as MEK inhibitors are helping people with melanoma, but not everyone.

‘While some patients respond to therapy, others do not. In addition, many patients develop resistance to treatment which requires alternate medicine combinations.

‘Manipulating the microbiome with prebiotics might be a helpful addition to current treatment regimens, and today’s finding should be further tested in independent models and systems.’

Dr Ronai, a professor of tumour initiation, cautioned that these findings require much more study before considering any evaluation in people with cancer.

He said: ‘Our findings are a step forward in our understanding of how certain prebiotics affect tumour growth, but we are far from applying these to humans.

‘Future studies need to be conducted in more complex animal models of different genetic backgrounds and ages to address the complex nature of human tumours before we may consider evaluating these prebiotics in people.’