Proof you can be hit by cancer-causing HPV… even if you had the jab: Woman, 25, who was vaccinated as a teen at school reveals it happened to her – and that’s why screening is still vital

When Jessica Donald opened a letter last September inviting her to attend a cervical cancer screening test at her GP surgery shortly before her 25th birthday, she booked her appointment and didn’t give it a second thought.

The dietician from Birmingham regarded the check, often referred to as a smear test, as just another part of routine healthcare, a bit like visiting the dentist.

And having had the cervical cancer-preventing HPV (or human papillomavirus) vaccination at school when she was 14 – Jessica was among the first wave of youngsters to be given the jab – she was confident she had nothing to worry about.

‘At school we were told the HPV jab was to prevent cervical cancer,’ recalls Jessica. ‘Obviously, this wasn’t a huge worry for me as a teenager, but I thought the jab was a good thing because I assumed it would mean that I was unlikely ever to get it.’ 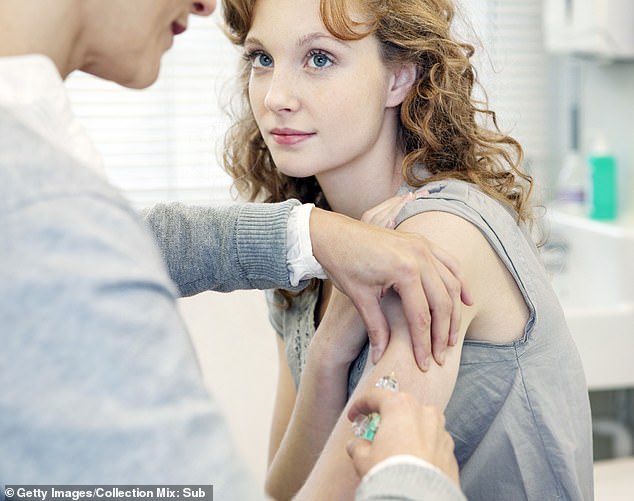 Above, file image of a young woman having a cervical cancer-preventing HPV (or human papillomavirus) vaccination.  Statistics suggest the jab could prevent more than 100,000 cancer cases over the next three decades. But although the programme is highly effective, it isn’t perfect

This was backed up by the nurse who carried out Jessica’s screening last year, during which a sample was taken from her cervix using a swab. ‘She told me that as I’d been vaccinated, I’d more than likely be just fine,’ continues Jessica.

‘I was told I’d get the results by post in six to eight weeks, and when it didn’t arrive by then, I didn’t really worry or pursue it.

‘I fully expected to be given the all-clear, and that I’d simply need to book another appointment in three years.’

But Jessica didn’t get the all-clear. The result arrived by post, informing her that she had tested positive for HPV.

Although further tests showed no changes to the cells taken from the cervix that indicated a cancer risk, she would have to have another smear test in 12 months to monitor the situation.

‘It was a huge shock – just the most horrible feeling to be told I had this infection, mainly because I was completely unprepared,’ says Jessica. ‘I didn’t really know anything about HPV and had no idea I was at risk.

‘All along, it seemed like everyone was saying, because I’d been vaccinated, I didn’t have to worry.

‘I’ve sort of come to terms with it all now, as I’ve read up on HPV, and understand it’s usually harmless. But there is still that worry in the back of my mind.’

Vaccine is effective… but it’s not perfect

HPV is the name given to a group of common viruses that are transmitted through close skin-to-skin contact.

More than 80 per cent of the population will be affected at some point by one, and they live harmlessly on the body for much of the time.

However, for reasons not fully understood, a small number of these viruses can cause changes in delicate body tissues and trigger a wide range of cancers, including those of the cervix, anus, genitals, head and neck. 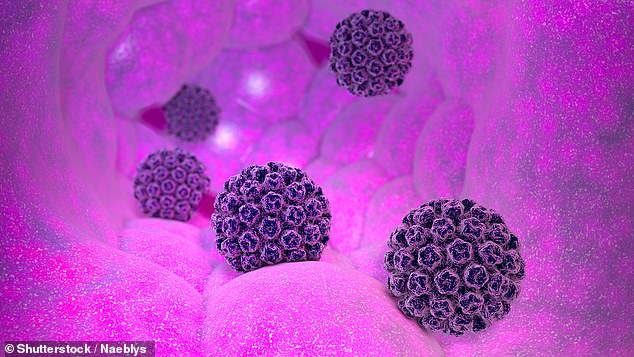 HPV is the name given to a group of common viruses that are transmitted through close skin-to-skin contact. More than 80% of the population will be affected at some point by one, and they live harmlessly on the body for much of the time. However, a small number of these viruses can cause changes in delicate body tissues and trigger a wide range of cancers, including those of the cervix, anus, genitals, head and neck

As HPV is endemic, it is not generally referred to as a sexually transmitted infection. However, it is thought to be mainly transmitted through intimate body contact. Up to five per cent of all cancers are believed to be HPV-related.

‘The HPV vaccine is thought to protect against the initial infection – that is why it is offered to 12- and 13-year-olds, before most are sexually active,’ says Dr Philippa Kaye, a GP and spokeswoman for the charity Jo’s Cervical Cancer Trust. ‘At this age, the immune system is more active and so responds better to the jab.’

A nationwide vaccination programme of teenage girls began in 2008, and last year boys were added to the schedule.

At present, two jabs are needed to provide full protection (three, if the vaccine is given to anyone older – again, due to the immune system becoming less active with age). Next week scientists are expected to announce new results into trials of a single-dose vaccine.

Dying for a wee? Why you shouldn’t hold it in

Next time you delay a trip to the toilet, spare a thought for Jennifer Strange, who died from holding it in.

In 2007, the mother-of-three from Sacramento, California, entered a radio competition entitled ‘Hold your wee for a Nintendo Wii’.

Participants were challenged to drink a bottle of water every 15 minutes for as long as possible without going to the bathroom.

The prize was the popular games console, which Strange wanted to give to her children.

The 28-year-old developed a throbbing headache and died a few hours later.

A coroner ruled she died of hyponatremia – a water overdose where the water thins sodium levels in the blood. Severe headaches are a warning sign, and if sodium levels reach dangerously low levels, coma and death can occur.

The programme is already proving successful. Over the past decade, infections of some types of HPV in 16- to 21-year-old women are down 86 per cent in England.

Dr Kaye adds: ‘A Scottish study also showed the vaccine has reduced pre-cancerous cervical disease in younger women by up to 71 per cent.’

Statistics suggest the jab could prevent more than 100,000 cancer cases over the next three decades. But although the programme is highly effective, it isn’t perfect.

Until 2012, the vaccine protected against two strains of HPV – those responsible for 80 per cent of cervical cancer cases, according to Professor Margaret Stanley, a biologist and HPV researcher at Cambridge University.

The jab given to children now guards against four strains, the two cancer-causing types and the two which cause genital warts, offering 100 per cent protection against infection.

‘But there are 11 other cancer-causing strains of HPV that the vaccines either don’t cover, or incompletely cover,’ Prof Stanley adds. ‘These types of contribute to 15 to 20 per cent of all cervical cancer cases, usually in older women. But nonetheless, this is why screening is still important.’

Cervical screening is offered routinely to all women in Britain aged between 25 and 65.

Last year saw a major change to the test. Instead of using a lab to check for worrying cell changes that could indicate future cancer risk, in the first instance doctors now just look for the presence of cancer-causing HPVs.

Only if this is positive are further tests carried out, to check whether there have been any changes to the cervical cells.

Girls who think they are no longer at risk

HPV is thought to be the cause of almost all cervical cancers. But, despite this, research by Jo’s Cervical Cancer Trust has found that a quarter of women don’t attend cervical screening, with that number rising to a third of those under 30.

Many factors are in play, from embarrassment to simply not being able to get an appointment.

But one woman in ten believes that having an HPV vaccination means it is unnecessary to have a smear test. This rings true for Jessica Donald.

‘I’m quite diligent about my health but a lot of girls my age will assume they don’t need to have a smear test, which isn’t the most pleasant thing to do anyway, because they’ve been vaccinated. I am proof that that’s not true.’

Jessica, who is single, has been told that if she develops any symptoms, she should see her doctor straight away – and she feels strongly that the NHS needs to rethink the way women are counselled before a smear test.

‘I’m going to have more regular screening. Hopefully if anything does change. But I felt like I was being told I wasn’t at risk, when in fact that’s not the case.’

Dr Kaye, who sees patients at a busy practice in North London, agrees: ‘Vaccination means women are at much lower risk of HPV and HPV-related cancers, but the risk is still there. And that’s why screening is still essential.’