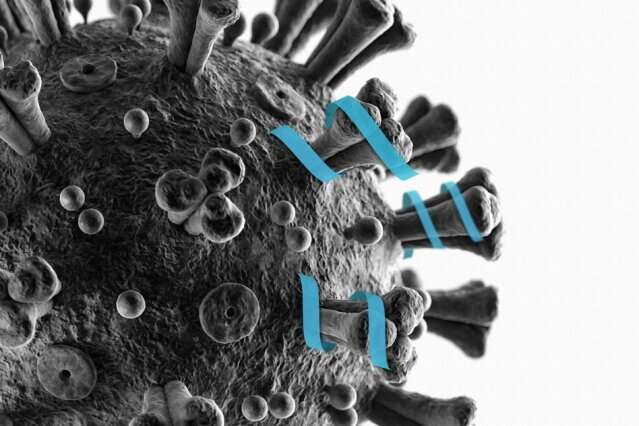 In hopes of developing a possible treatment for COVID-19, a team of MIT chemists has designed a drug candidate that they believe may block coronaviruses’ ability to enter human cells. The potential drug is a short protein fragment, or peptide, that mimics a protein found on the surface of human cells.

The researchers have shown that their new peptide can bind to the viral protein that coronaviruses use to enter human cells, potentially disarming it.

“We have a lead compound that we really want to explore, because it does, in fact, interact with a viral protein in the way that we predicted it to interact, so it has a chance of inhibiting viral entry into a host cell,” says Brad Pentelute, an MIT associate professor of chemistry, who is leading the research team.

The MIT team reported its initial findings in a preprint posted on bioRxiv, an online preprint server, on March 20. They have sent samples of the peptide to collaborators who plan to carry out tests in human cells.

Pentelute’s lab began working on this project in early March, after the Cryo-EM structure of the coronavirus spike protein, along with the human cell receptor that it binds to, was published by a research group in China. Coronaviruses, including SARS-CoV-2, which is causing the current COVID-19 outbreak, have many protein spikes protruding from their viral envelope.

Studies of SARS-CoV-2 have also shown that a specific region of the spike protein, known as the receptor binding domain, binds to a receptor called angiotensin-converting enzyme 2 (ACE2). This receptor is found on the surface of many human cells, including those in the lungs. The ACE2 receptor is also the entry point used by the coronavirus that caused the 2002-03 SARS outbreak.

In hopes of developing drugs that could block viral entry, Genwei Zhang, a postdoc in Pentelute’s lab, performed computational simulations of the interactions between the ACE2 receptor and the receptor binding domain of the coronavirus spike protein. These simulations revealed the location where the receptor binding domain attaches to the ACE2 receptor—a stretch of the ACE2 protein that forms a structure called an alpha helix.

“This kind of simulation can give us views of how atoms and biomolecules interact with each other, and which parts are essential for this interaction,” Zhang says. “Molecular dynamics helps us narrow down particular regions that we want to focus on to develop therapeutics.”

The MIT team then used peptide synthesis technology that Pentelute’s lab has previously developed, to rapidly generate a 23-amino acid peptide with the same sequence as the alpha helix of the ACE2 receptor. Their benchtop flow-based peptide synthesis machine can form linkages between amino acids, the buildings blocks of proteins, in about 37 seconds, and it takes less than an hour to generate complete peptide molecules containing up to 50 amino acids.

“We’ve built these platforms for really rapid turnaround, so I think that’s why we’re at this point right now,” Pentelute says. “It’s because we have these tools we’ve built up at MIT over the years.”

They also synthesized a shorter sequence of only 12 amino acids found in the alpha helix, and then tested both of the peptides using equipment at MIT’s Biophysical Instrumentation Facility that can measure how strongly two molecules bind together. They found that the longer peptide showed strong binding to the receptor binding domain of the COVID-19 spike protein, while the shorter one showed negligible binding.

Although MIT has been scaling back on-campus research since mid-March, Pentelute’s lab was granted special permission allowing a small group of researchers to continue to work on this project. They are now developing about 100 different variants of the peptide in hopes of increasing its binding strength and making it more stable in the body.

“We have confidence that we know exactly where this molecule is interacting, and we can use that information to further guide refinement, so that we can hopefully get a higher affinity and more potency to block viral entry in cells,” Pentelute says.

In the meantime, the researchers have already sent their original 23-amino acid peptide to a research lab at the Icahn School of Medicine at Mount Sinai for testing in human cells and potentially in animal models of COVID-19 infection.

While dozens of research groups around the world are using a variety of approaches to seek new treatments for COVID-19, Pentelute believes his lab is one of a few currently working on peptide drugs for this purpose. One advantage of such drugs is that they are relatively easy to manufacture in large quantities. They also have a larger surface area than small-molecule drugs.

“Peptides are larger molecules, so they can really grip onto the coronavirus and inhibit entry into cells, whereas if you used a small molecule, it’s difficult to block that entire area that the virus is using,” Pentelute says. “Antibodies also have a large surface area, so those might also prove useful. Those just take longer to manufacture and discover.”

One drawback of peptide drugs is that they typically can’t be taken orally, so they would have to be either administered intravenously or injected under the skin. They would also need to be modified so that they can stay in the bloodstream long enough to be effective, which Pentelute’s lab is also working on.