Slimming clubs should tell members they could die of CANCER to get them to lose more than just half a pound each week, expert claims

Slimming clubs should tell fat members they could die from cancer to encourage them to lose weight, an expert has said.

Steve Miller, a weight loss mentor, said dieters get stuck in a routine of losing 1lb (0.4kg) or less each week.

But if team leaders were harsher and banned ‘excuses’ it could actually motivate members to achieve long-term results, he said.

Being overweight can cause cancer as well as other life-limiting conditions, such as heart disease and type 2 diabetes.

Other industry experts agree clubs such as Slimming World need a makeover, but said problems lie with a lack of emotional support for dieters.

Psychologists say members can leave heavier than when they started because clubs don’t help them recognise why they overeat in the first place. 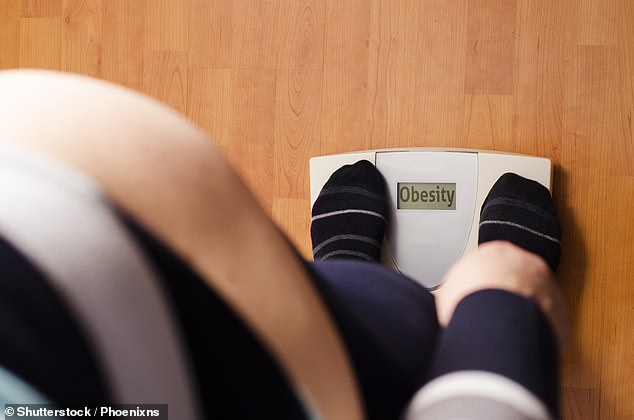 Mr Miller told MailOnline: ‘I think there needs to be some kind of new invigoration in content in a slimming club. It’s just sitting moaning, whinging, and clapping for half a pound.

‘It’s not about being horrible or cruel to people, it’s about being cruel to be kind. You have to be honest about the reality of fat. Fat people often die.

‘These leaders should be saying you have lost half a pound, but you’re currently 22st (139.7kg) and 5ft1 and if you don’t lose weight, you might die of cancer.

‘Does that mean they have to tell themselves to get a grip? Absolutely. Less moaning, more action, and then you can celebrate.

‘They need a makeover to be braver and bolder.’

Being overweight or obese is the second biggest preventable cause of cancer in the UK, second only to smoking.

WHAT ARE THE HEALTH RISKS OF OBESITY?

This is due to obesity increasing a person’s risk of a number of life-threatening conditions.

Such conditions include type 2 diabetes, which can cause kidney disease, blindness and even limb amputations.

Research suggests that at least one in six hospital beds in the UK are taken up by a diabetes patient.

Obesity also raises the risk of heart diseases, the second leading cause of death in 2017, after dementia.

Carrying dangerous amounts of weight has also been linked to 12 different cancers.

This includes breast, which affects one in eight women at some point in their lives.

More than one in 20 cancer cases are caused by being fat, figures show. Excess weight is the second biggest preventable cause of cancer in the UK after smoking.

Among children, research suggests that 70 per cent of obese youngsters have high blood pressure or raised cholesterol, which puts them at risk of heart disease.

And if children are overweight, their obesity in adulthood is often more severe.

More than one in 20 cancer cases are caused by being fat, figures show. Weight loss can cut the risk drastically.

Clubs like Slimming World and Weight Watchers have been around since the 1960s to help people drop the pounds. Thousands have found success with the clubs which continue to soar in popularity as an affordable way to change habits.

The British Dietitian Association praise the group meetings for an easy way for members to share ideas and recipes with each other – but admit they may not appeal to everyone.

The clubs’ plans centre on changing eating habits such as eating more vegetables, filling up on low-calorie foods and cutting back on sweet treats.

But the ‘rules’ have come under controversy in the past – many independent experts have slammed the lack of education on nutrition provided.

Sophie Bertrand, a registered associate nutritionist on Harley Street, said the rules – such as point counting, low-fat and weekly weigh-ins – can cause an unhealthy relationship with food.

‘As a result [this] likely means you will be required to categorise foods as “good” or “bad”, depending on the number of “points” or “syns” they are worth.

‘Creating “rules” around food is a dangerous game and it encourages an unhealthy relationship with food.’

In response, Slimming World ‘strongly refuted’ the claims that their plan encourages ‘unhealthy behaviours’, and that their methods are based on scientific research.

Ms Bertrand warned that generally, constant dieting can lead to further health problems – studies have shown dieting can slow metabolism and create feelings of guilt and anxiety around food.

Diets can also lead to weight regain because the body and mind naturally fight against a change in diet, perceiving it to be a stressor.

Ms Betrand said: ‘There is a body of research highlighting various consequences of constant dieting. You can’t diet forever.’

The comments come ahead of an inevitable surge of sign-ups to diet clubs in the new year, with women and men across the country hoping to shift their Christmas bulge.

Although slimming club newbies will expect some success, one expert warned there may be disappointed.

She told MailOnline: ‘For most people, the results are short-lived as people revert back to their old behaviours.

‘When people start dieting, they have willpower and motivation for success, but when the diet fails, they begin to blame themselves for this failure.’

Ms Konstantopoulou said for long-term change, there needs to be a psychological element involved.

She said: ‘People need to understand what contributed to their weight gain in the first place.

‘Perhaps they were comfort eating or stress eating. Once the root of the problem is identified, that’s when real, long-lasting changes can be made.

Body mass index (BMI) is what the NHS use to measure if a person is too overweight for their height.

SLIMMING CLUBS: WHAT ARE THEY AND WHAT DO THE EXPERTS THINK?

What is Slimming World?

There is a list of low-fat foods they call ‘Free Foods’ that are generally filling and low in energy, such as fruit, vegetables, pasta, potatoes, rice, lean meat, fish and eggs. These can be eaten in unlimited amounts.

There are additional ‘healthy extras’, such as milk, cheese, cereals and wholemeal bread.

Slimming World doesn’t ban foods and some argue there is no type of counting, such as calories.

However, members do need to keep track of their ‘Syns’. You’re allowed a total number of daily Syns which mostly ranges from around five to 15 a day. Examples of Syns are a glass of wine of a piece of chocolate.

The sign up costs £10 each time, and the weekly group sessions and weigh-ins cost £4.95.

The British Dietitian Association (BDA) say the group meetings may encourage members to share ideas, but don’t appeal to everyone.

They say the principles can help members understand what foods are higher in energy, leading to long-term healthy eating.

What is WeightWatchers (WW)?

The WW programme is based on a smart points system which gives a value to foods and drink based on protein, carbs, fat and fibre content.

There are different programmes – Green, Blue and Purple, which are suited for different needs, based on a survey you fill out on joining.

There’s no limit to the amount of fruit and most veg you can eat as part of a list of zero-points foods.

There’s a focus on keeping active and choosing exercise that you enjoy as a means of earning points, and there are plenty of recipes to help with the healthy eating weight loss plan.

It has weekly group meetings and private weigh ins. It costs from £2.73 a week which includes the meditation content on their app.

The BDA says WeightWatchers can be a foundation for long-term changes in dietary habits.

However, it adds it’s important members appreciate the connection between the points system and calories in order to aid long-term weight management.

The LighterLife weight loss plans combine a very low-calorie diet (VLCD) with weekly counselling. People with a BMI of 30 or more eat four meal-replacement food packs a day – consisting of shakes, soups, mousses or bars – and no conventional food.

Those with a BMI of 25 to 30 eat three food packs a day, plus 1 meal from a list of approved foods.

The meal plans can lead to very rapid weight loss, which the BDA say is unsustainable. And a VLCD that involves eating 1,000 calories or fewer should not be followed for more than 12 continuous weeks.

It adds: ‘People often regain weight after the diet and, overall, research suggests there’s little difference between a VLCD and conventional weight loss after one to two years.’

However, the NHS commends the addition of counselling which can help members understand their relationship with food.

WHAT DID SLIMMING WORLD SAY?

‘On the contrary, our programme of sustainable healthy eating, and encouragement to become more active, combined with powerful group support, ensures thousands of people every year lose weight, and maintain a healthy weight by adopting healthier habits.

‘Our methods have been developed over 50 years, and are underpinned by a wealth of rigorous evidence and research.

‘Our programme meets government National Institute for Health and Care Excellence (NICE) guidance for weight management, which is why it’s been chosen by many health commissioners as an option for NHS patients who wish to lose weight.

‘A recent review by the British Nutrition Foundation found that women following Slimming World’s programme are consuming a diet that more closely meets UK dietary guidelines than that of the average UK adult female population.

‘At the heart of the Slimming World programme is an eating plan based on the science of energy density and satiety – helping people navigate towards healthier food choices which are both highly satisfying and naturally low in calories – such as pasta, rice, grains, lean meat, fish, and fresh fruit and vegetables.

‘These foods, which we call Free Foods, pose a very low risk for the over-consumption of calories because gram for gram, they’re the lowest calorie options. Higher risk, high calorie foods such as pastries, sweets and alcohol can still be enjoyed but in measured quantities.

‘This approach means that members can lose weight without going hungry, without guilt and without counting, weighing or measuring.

‘Slimming World has been actively involved in research into this area for over 25 years, including a recent study by the University of Leeds, and there’s a robust body of evidence to show that greater consumption of low energy dense foods (foods that are lowest in calories per gram), naturally limits energy intake, reduces hunger and results in better weight loss and weight maintenance.

‘In our weekly groups, led by trained consultants who’ve lost weight themselves, our members learn to make healthier choices, to identify their trigger points and danger zones and make plans to overcome them.

‘They’re a friendly, supportive and compassionate environment where people with the same goals meet to support one another to succeed.’

The statement included a link to published research and data from 1.3million Slimming World group members. It showed that,  on average, members lose:

• 4.4 per cent of their body weight in three months

• 13.2 per cent of their body weight over 12 months when they attend three out of every four weekly group sessions

The spokesperson continued: ‘Slimming World’s unique system, developed over many years, continues to evolve based on research, insight and applied science to support our members with knowledge, confidence and effective tools to manage their weight for life.

‘As well as independently published research and our own insight and research among members, we work closely with a team of special advisers -nutritionists, psychologists and behavioural scientists – to keep our programme up to date.’