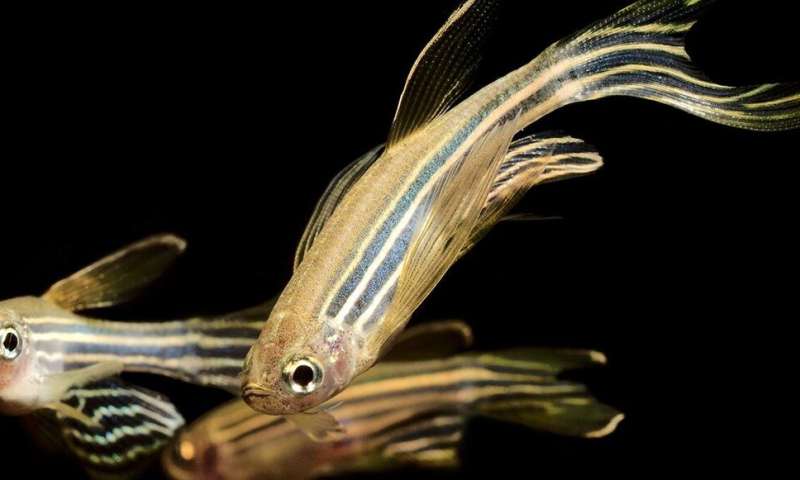 The need to feel balanced drives the development of coordination between body and limbs as zebrafish larvae learn to swim, a new study finds.

Published online October 8 in eLife, the study found that the developing fish rely on their vestibular organs—the equivalent of the human inner ear—as their sense of balance oversees improvements in coordination needed to remain horizontal. A level posture is preferred across evolution, say the study authors, as it helps animals to move, find food, and evade predators.

Led by researchers from NYU School of Medicine, the work focused on zebrafish larvae, which undergo their development while swimming in the water, venturing into their environment much earlier after fertilization (3-30 days) than a human fetus, which continues to develop in the womb. This external development enabled researchers to watch larvae for changes in movement patterns that depend on brain circuits similar to those that enable human balance.

“The relationship between balance and movement is broken in rare diseases like Developmental Coordination Disorder, and in ataxias, the movement problems that occur in patients with multiple sclerosis and in those who have had a stroke,” says lead study investigator David Schoppik, Ph.D., assistant professor in the Department of Neuroscience and Physiology at NYU School of Medicine.

“Our hope is that the work in fish guides the future development of therapies for disorders caused by the brain’s mishandling of balance cues as it coordinates muscle groups,” says Schoppik.

Past studies have argued that fins evolved into the forelimbs of land animals, and that zebrafish pectoral fins may provide a useful model for the role of forelimbs in coordinated movement. Maturing humans learn to swing their arms and flex trunk muscles as they walk, which reduces angular momentum (the tendency to pitch forward). However, the sensations that guide the development of this coordination are poorly understood.

One clue observed across evolution is that animals prefer to remain horizontal to satisfy a sense of balance and orientation to the world. On land, animals judge their orientation relative to gravity using many senses, including the feeling of how hard their feet are pressing on the ground, say the authors. The related biomechanics are more complex on land than underwater where, thanks to buoyancy, animals are more dependent on a single factor—their vestibular sense—to guide improvements in coordination, researchers say.

The research team also found that zebrafish engineered to lack function in their utricular otoliths—the fish version of the balance system—did not get better with age at coordinating trunk and fin movements to achieve postural stability.

The study results also address the cerebellum, long established as a center for the coordination muscle movements (motor coordination). The new work showed that zebrafish with disabled cerebellar function, instead of using lift-generating pectoral fins only while climbing, also use them as they try to dive. Cerebellar Purkinje cells in particular blocked pro-movement signals to rule out pectoral fin movements when they would clash with body movements.