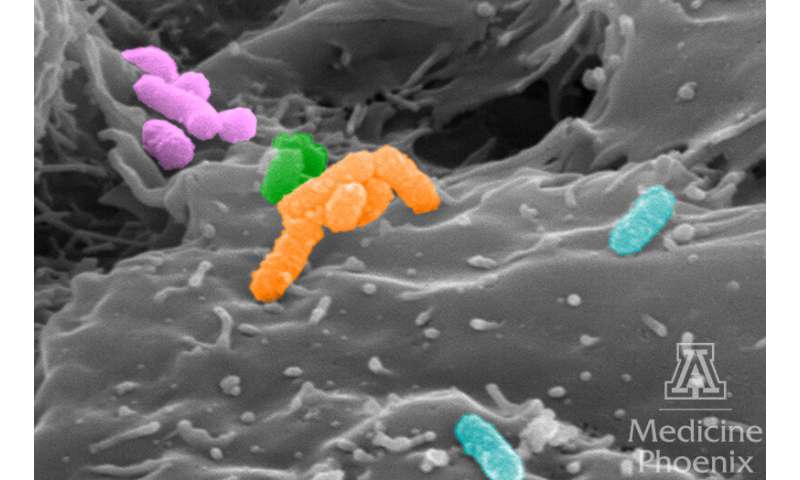 Women with bacterial vaginosis exhibit elevated levels of the pro-inflammatory protein, IL-36y, according to a new collaborative study led by the University of Arizona College of Medicine-Phoenix.

Bacterial vaginosis (BV) is the most common bacterial infection in females, affecting more than 21 million U.S. women. BV is a complicated disease to study and understand, because it involves multiple, complex infectious agents. Having BV makes women more susceptible to sexually transmitted infections and other diseases, according to the Centers for Disease Control and Prevention (CDC).

Melissa Herbst-Kralovetz, Ph.D., an associate professor in the Department of Basic Medical Sciences at the College of Medicine-Phoenix, led the study with Emory University and the CDC. The group analyzed cervicovaginal epithelial cells collected from women with and without bacterial vaginosis. The study, published in October in the Journal of Infectious Diseases, included a team of UArizona College of Medicine—Phoenix investigators, including Pawel Laniewski, Ph.D., a research scientist, and Jameson Gardner, a graduate research student, both members of Dr. Herbst-Kralovetz’s lab.

“These new findings, coupled with our other recent reports, are incredibly exciting as we build our understanding of this novel cytokine in terms of health and disease in the genital tract,” Dr. Herbst-Kralovetz said. In this study, we learned that this novel protein is elevated in the most common vaginal disorder—BV, and may be playing a key role in susceptibility to other diseases.”

“BV is a type of vaginal infection caused by the overgrowth of diverse vaginal anaerobes bacteria that require no oxygen to survive or grow,” Dr. Laniewski said. “The cause and manifestation of this common disorder still remains controversial.”

Researchers profiled the microbiome in women with and without BV and determined if the novel cytokine (IL-36y) was elevated in women with BV. They then selected several bacteria highly associated with BV and prevalent in clinical studies to infect in a human 3-D cervical epithelial cell model, which allowed them to use a reductionist approach to better understand the potential contributions of specific bacteria to changes in immune activity, such as measuring IL-36y levels. A reductionist approach starts from the simplest level and works upward in complexity, with the idea that isolated molecules, or in this case bacteria, have the power to provide understanding of the entire system.

Dr. Laniewski said the study brings researchers “closer to better understanding how different microbes commonly found in women with BV contribute to the activation of specific components of our immune system, which can relate to disease incidence and recurrence.”

The laboratory of Dr. Herbst-Kralovetz has shown that IL-36y is an important regulator of inflammation in the female reproductive tract. In addition to this study, researchers investigated the role of IL-36y in the immune response to the herpes infection. They demonstrated that IL-36y is elevated in cervical cancer. Collectively, they hypothesize this research can have broad implications with other bacterial and viral sexually transmitted infections and gynecologic diseases, including cancer.

Researchers say they don’t necessarily know the role IL-36y may play in these diseases, but many of them cause, or are driven by and exacerbated by, the inflammatory response. Therefore, IL-36y could be an important mediator of the response to disease.