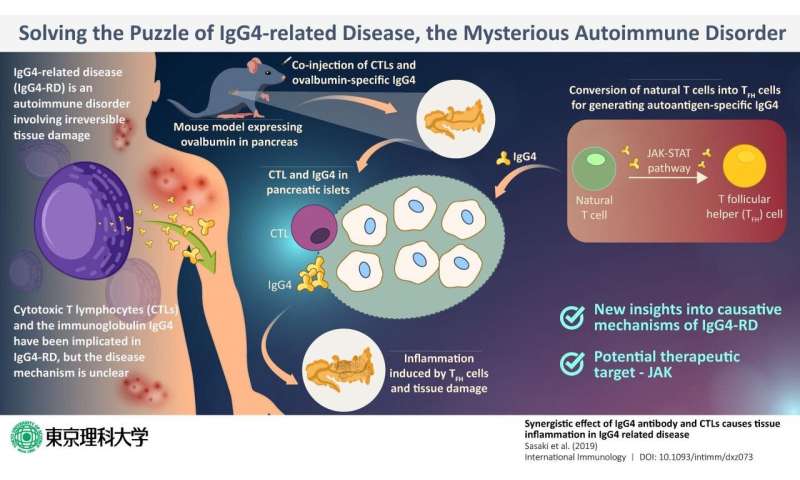 Autoimmune diseases are a medical conundrum. In people with these conditions, the immune system of the body, the designated defense system, starts attacking the cells or organs of its own body, mistaking internal cells for invading disease-causing cells. Often, the cause for this spontaneous dysfunction is not clear, and hence, treatment of these diseases presents a major and ongoing challenge.

One recently discovered autoimmune disease is the IgG4-related disease (or IgG4-RD), which involves the infiltration of plasma cells that are specific to the immunoglobulin (antibody) IgG4 into the body tissue, resulting in irreversible tissue damage in multiple organs. In most patients with IgG4-RD, the blood levels of IgG4 also tend to be higher than those in healthy individuals. Previous studies show that T cells—which are white blood cells charged with duties of the immune response—play a key role in the disease mechanism. In particular, special T cells called cytotoxic T lymphocytes, or CTLs, were found in abundance from the inflamed or affected pancreas of patients, along with IgG4. But what was the exact role of CTLs?

In a new study published in International Immunology, a team of scientists from Tokyo University of Science decided to find the answer to this question. Prof. Masato Kubo, a member of this team, states that their aim was twofold. “We planned to explore how IgG4 Abs contributes to the CTL-mediated pancreas tissue damage in IgG4-RD, and also to evaluate the pathogenic function of human IgG4 Abs using the mouse model that we have established.” The latter is especially important, as IgG4 is not naturally present in mice, meaning that there is a severe lack of adequate animal models to explore this disease.

With these aims, they selected mice that have been genetically programmed to express a protein called ovalbumin (the major protein in egg white) in their pancreas. Then, they injected IgG4 that specifically targets ovalbumin into the mice. Their assumption was that IgG4 would target the pancreas and bring about IgG-4-RD-like symptoms. However, what they found was surprising. No inflammation or any other symptom typical of IgG4-RD appeared. This convinced the researchers that IgG4 alone was not the causative factor of IgG4-RD.

Next, to check if it was the CTLs that were perhaps the culprit, the scientists injected both IgG4 specific against ovalbumin as well as CTLs. Now, the pancreas of the mice showed tissue damage and inflammation. Thus, it was established that the presence of CTLs and IgG4 was necessary for pancreatic inflammation.

When they probed further, they found that another variation of T cells, known as T follicular helper or TFH cells, which develop from the natural T cells of the mice and produce self-reactive antibodies like IgG4, which induce inflammation in combination with CTLs.

Once the puzzle was pieced together, the scientists now had the opportunity to zero in on the target step for intervention; after all, if one of these steps is disrupted, inflammation can be prevented. After much deliberation, they proposed that Janus kinase, or JAK, can be a suitable target. JAK is a key component of the JAK-STAT cellular signaling pathway, and this pathway is an integral step in the conversion of natural T cells of the mice to TFH cells. If JAK is inhibited, this conversion will not take place, meaning that even the presence of CTLs will not be able to induce inflammation.

Prof. Kubo also suggests a broader outlook, not limited to the therapeutic option explored in the study. He states, “based on our findings, the therapeutic targets for IgG4-related diseases can be the reduction of TFH cell responses and the auto-antigen specific CTL responses. These can also provide the fundamental basis for developing new therapeutic applications.”