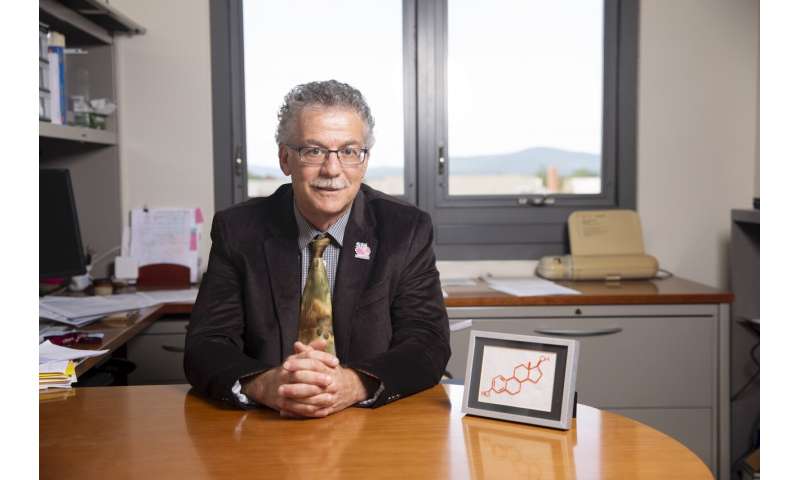 A new approach to studying the effects of two common chemicals used in cosmetics and sunscreens found they can cause DNA damage in breast cells at surprisingly low concentrations, while the same dose did not harm cells without estrogen receptors.

The research, published Jan. 15 in Environmental Health Perspectives, identifies a new mechanism by which estrogens and xenoestrogens—environmental chemicals that act like estrogens—may promote breast cancer, says breast cancer researcher D. Joseph Jerry, professor of veterinary and animal sciences at the University of Massachusetts Amherst. Jerry also serves as science director of the Pioneer Valley Life Sciences Institute and co-director of the Rays of Hope Center for Breast Cancer Research in a partnership between UMass Amherst and Baystate Medical Center.

“The new research offers more sensitive tools to screen for the potential deleterious effects of environmental chemicals, which would be overlooked by methods currently used,” Jerry explains. He notes that federal agencies, such as the Food and Drug Administration (FDA), typically screen for toxicity of these chemicals in cell lines that don’t have estrogen receptors.

The two compounds—examined in cells grown in the lab and in the mammary glands of mice—were the ultraviolet filter benzophenone-3 (BP-3), also known as oxybenzone, and propylparaben (PP), an antimicrobial preservative found in cosmetics and other personal care products.

Jerry emphasizes that more research is needed to determine what this discovery may mean in terms of consumer guidelines. “Benzophenone-3 is a sunscreen that works. If you use it, you can prevent skin cancer. Am I arguing you shouldn’t use sunscreen? I am not. But there may be a subset of people for whom it may present a significant hazard,” says Jerry, such as women at high risk for breast cancer or those with a history of estrogen receptor-positive breast cancer.

Previous research on the impact of BP-3 and PP focused on the exposure necessary to activate specific genes in cancer cells or accelerate their growth. “Those effects required concentrations that exceed the levels that most women are normally exposed to,” Jerry says.

But the new research shows that DNA damage in breast cells with estrogen receptors occurred at concentrations that are 1/10th to 1/30th of that required to stimulate proliferation or gene expression. “There may be a risk at lower levels than we would have previously understood,” Jerry says.

Jerry and colleagues at UMass Amherst, UMass Medical Center-Baystate and Pioneer Valley Life Sciences Institute decided to look at whether PP and BP-3 have estrogenic effects at concentrations relevant to population exposures because “we know that estrogen can promote breast cancer,” Jerry says.