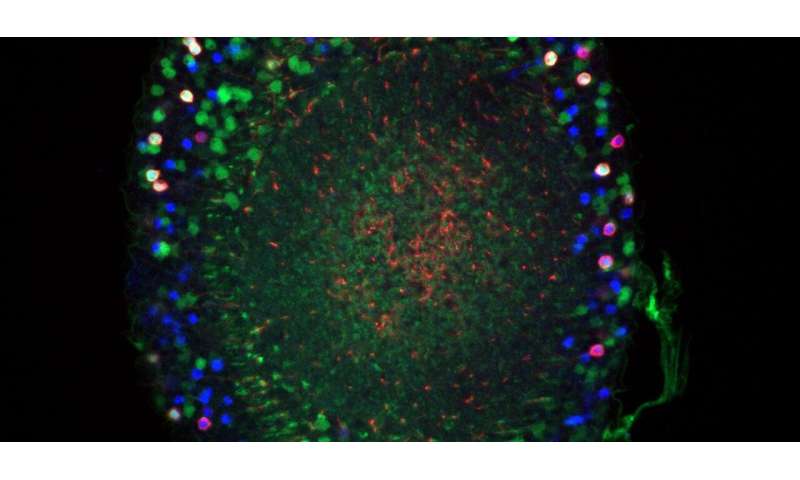 The brain’s complex tangle of interconnected nerve cells processes visual images, recalls memories, controls motor function, and coordinates countless other functions. A major goal of neuroscience is understanding how the brain is “wired”—in other words, how do all of its neurons know how they should connect to each other to achieve optimum function?

The fruit fly Drosophila melanogaster is an ideal model system for understanding how genetic information controls neural wiring because Drosophila have hardwired brains, which means that the neural connections in the brains of two average flies will likely be nearly identical. Being nearly identical does not mean that Drosophila brains are simple, however. There are 60,000 brain cells in the fly’s optic lobe region alone. How does each neuron know which connections to make while the brain is developing?

Now, Caltech researchers have determined how part of the fly’s visual system forms, an important piece in understanding the brain’s connectivity.

A paper describing the research appears in the journal eLife. The work was done in the laboratory of Kai Zinn, Howard and Gwen Laurie Smits Professor of Biology. Zinn is an affiliated faculty member with Caltech’s Tianqiao and Chrissy Chen Institute for Neuroscience.

In the 1960s, Caltech neuroscientist and Nobel Laureate Roger Sperry proposed that neural circuit assembly is guided by interactions between cell-surface proteins—proteins that sit on the outer surface of neurons and other cells. Sperry’s hypothesis, which was based on his experiments on optic pathways in frog and fish brains, was that these proteins act like signposts, labeling individual neurons in the brain as appropriate targets for neurons in the eye. The new work from the Zinn laboratory identifies brain and eye cell-surface proteins in Drosophila that have these signpost functions.

Several years ago, researchers at Stanford and in the Zinn group at Caltech expressed each of 200 different Drosophila cell-surface proteins in lab dishes and characterized all the binding reactions among these proteins that occur in a test tube (about 40,000 possible combinations).

The work revealed that two families of cell-surface proteins, dubbed Dprs and DIPs, have a particular affinity for one another and that members of both families are found on the surfaces of neurons. Researchers in the Zinn laboratory have been trying to understand how this interaction plays a role in neural development.

The research described in the eLife paper focuses on a particular Dpr-DIP pairing, Dpr11 and DIP-gamma, that occurs in one of the neural circuits that enables Drosophila to see color. Dpr11 proteins are found on certain photoreceptors that process ultraviolet light and make connections to specific cell types (target neurons) that express DIP-gamma. The researchers studied how this neural circuit ensures that each photoreceptor is matched with the correct partner during assembly. They found that, when neural connections are being made in the developing visual system, the target neurons are generated in excess and compete for their photoreceptor partners. This matching is possible because of the interaction between Dpr11 on the photoreceptors and DIP-gamma on the target neurons. Thus, if the two proteins were not both expressed (as was the case, for example, in flies with mutations in either the dpr11 or DIP-gamma genes), the target neurons died and the neural circuit did not develop correctly. Analysis of the neural connections in mutant flies suggests that they should have defects in color vision.