New COVID-19 cases in children jumped by 66% during the first 2 weeks of December after an 8-week steady period lasting through October and November, according to the American Academy of Pediatrics and the Children’s Hospital Association. 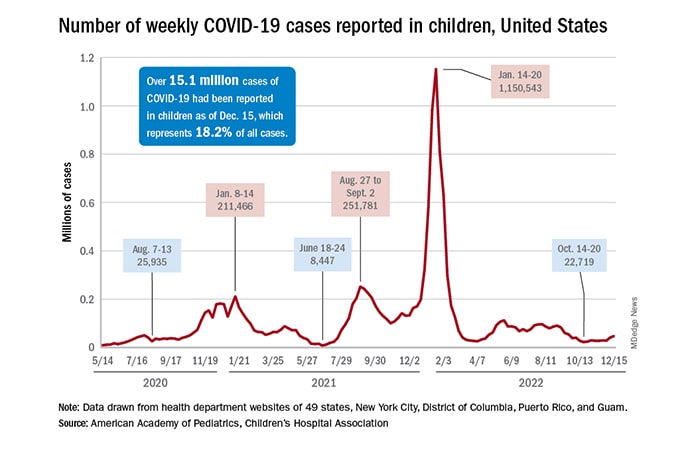 New cases reached close to 48,000 for the most recent reporting week, Dec. 9-15, after rising to just over 41,000 the previous week and totaling less than 29, free pharmacy technician law ce 000 for the week of Nov. 25 to Dec. 1. That increase of almost 19,000 cases is the largest over a 2-week period since late July, the AAP and CHA said in their weekly COVID report based on data collected from state and territorial health department websites.

[This publication has been following the AAP/CHA report since the summer of 2020 and continues to share the data for the sake of consistency, but it must be noted that a number of states are no longer updating their public COVID dashboards. As a result, there is now a considerable discrepancy between the AAP/CHA weekly figures and those reported by the Centers for Disease Control and Prevention, which has no such limitations on state data.]

The situation involving new cases over the last 2 weeks is quite different from the CDC’s perspective. The agency does not publish a weekly count, instead offering cumulative cases, which stood at almost 16.1 million as of Dec. 14. Calculating a 2-week total puts the new-case count for Dec. 1-14 at 113,572 among children aged 0-17 years. That is higher than the AAP/CHA count (88,629) for roughly the same period, but it is actually lower than the CDC’s figure (161,832) for the last 2 weeks of November.

One COVID-related measure from the CDC that is not contradicted by other sources is hospitalization rates, which had climbed from 0.16 new admissions in children aged 0-17 years with confirmed COVID per 100,000 population on Oct. 22 to 0.29 per 100,000 on Dec. 9. Visits to the emergency department with diagnosed COVID, meanwhile, have been fairly steady so far through December in children, according to the CDC.

This article originally appeared on MDedge.com, part of the Medscape Professional Network.