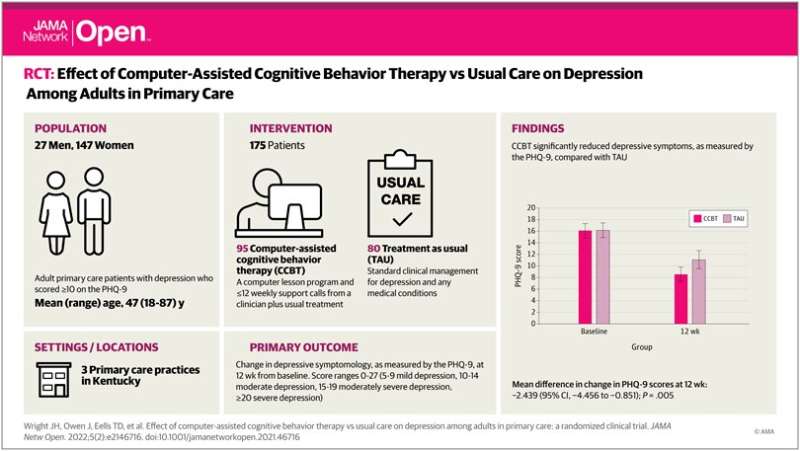 The study, published in JAMA Network Open, involved a clinical trial of 175 adult patients in the U.S., of which the majority (61.5%) are in the low-income category, with low educational attainment and limited access to the internet—a relatively deprived and underrepresented segment in clinical trials, study co-author Shehzad Ali, professor at Schulich Medicine & Dentistry, said. Nearly 85% of participants also identified as belonging to racial and ethnic minority groups.

“The remission rate with CCBT was actually double the treatment-as-usual rate, which is the comparator arm, which is not what we expected,” Ali said. “We did not expect that this particular patient population would respond as well as they did.”

The randomized clinical trial included adult primary care patients from the University of Louisville in Kentucky, who scored 10 or greater on the patient health questionnaire–9 (PHQ-9), a screening tool used by health-care professionals to measure the severity of depression in patients. Participants were randomly assigned to CCBT or TAU for 12 weeks of active treatment. Follow-up assessments were conducted at three and six months after treatment completion.

CCBT used for the study included a nine-lesson computer program called Good Days Ahead, along with as many as 12 weekly telephonic support sessions of approximately 20 minutes each with a master’s level therapist, in addition to TAU, which consisted of the standard clinical management procedures at the primary care sites.

After 12 weeks of acute treatment, CCBT significantly outperformed TAU in reducing PHQ-9 scores; these positive results were maintained over the three- and six-month follow-up intervals. Remission rates were more than double for CCBT compared with TAU at all time points, the study said.

Mental health treatment in Canada is swiftly moving in the direction of virtual care, which has been further accelerated by the current pandemic. However, concerns around effectiveness of virtual care for marginalized groups has also emerged. This study shows that, if appropriately implemented, CCBT could effectively reach deprived groups and can be an effective solution to the mental health crisis, said Ali, who is also a Canada Research Chair in Public Health Economics.

“The prevalence of depression has skyrocketed in the last few years, particularly during the pandemic. Health systems are resource-constrained, and we cannot provide high-intensity, 10-session treatments to all individuals who need support. This is really where the bottleneck is,” he said.

CCBT programs are designed to cater to patient needs, allowing them to log in and get access to therapy sessions, all at their own pace. And the cost is relatively small to the health-care system, said Ali.

“CCBT allows us to reach a much bigger patient population at substantially lower cost than seeing a clinical psychologist for one-to-one sessions, which is the predominant health provision mechanism in Canada.”

Ali pointed out the significance of this new study as one of the first studies to provide insight into the effectiveness of computerized therapies in a relatively marginalized population, which is often hard to reach and even harder to treat, particularly if they have not been exposed to computer-based treatments.

“We have demonstrated that CCBT can work in this hard-to-treat and hard-to-reach population; this has significant implications for clinical practice,” he said.

Ali said this study makes a good case for the primary care system to start incorporating CCBT care as a way to reach a much bigger part of the population requiring care and can effectively cut waiting times to see a therapist.