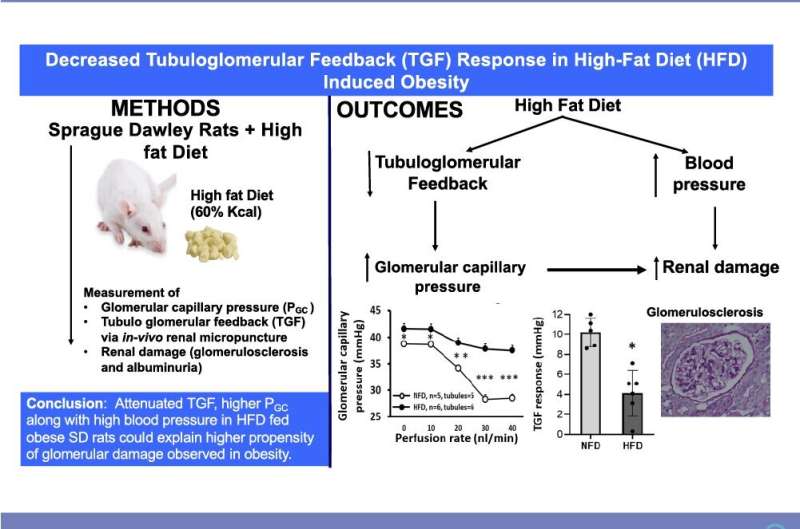 A high-fat diet after 16 weeks induced hypertension in rats, according to researchers from Henry Ford Health and Wayne State University in Detroit. High blood pressure can lead to narrowing of the blood vessels throughout the body, resulting in kidney dysfunction. The study also revealed rats fed a high-fat diet developed insulin resistance after 14 weeks and a decreased sensitivity of the tubuloglomerular feedback (TGF) mechanism, a feedback system in the kidneys that regulates renal function. The findings are published ahead of print in the American Journal of Physiology-Renal Physiology, and the study has been chosen as an APSselect article for the month of May.

The study was conducted in male rats using in vivo renal micropuncture (an examination of areas of the nephron) to measure the TGF response after a high-fat diet at four weeks and 16 weeks. Rats fed a high-fat diet gradually increased in weight but were significantly heavier by week eight of the study. Decreased TGF sensitivity causes less vasoconstriction in a small branch of an artery that feeds blood into the glomerulus (the afferent arteriole). This increases pressure inside the glomerulus, a cluster of capillaries between two resistance arterioles where plasma is filtered from the blood. An increase in glomerular pressure can damage the glomerulus.

This is the first study to provide direct evidence that obesity caused by a high-fat diet directly affects TGF to change glomerular pressure. The researchers behind this study are among a rare group of physiologists in the world who can perform in vivo measurements to show how this mechanism may cause glomerular injury in obesity. The hope is that more research will lead to therapies targeting TGF or signaling in the kidneys to reduce damage in people with chronic obesity.