For a bacterial cell, the cell-wall is vital in determining the shape of the cell and to maintain its structural integrity. This is a unique feature of bacterial cells, and several antibiotics work by targeting the bacterial cell-wall. 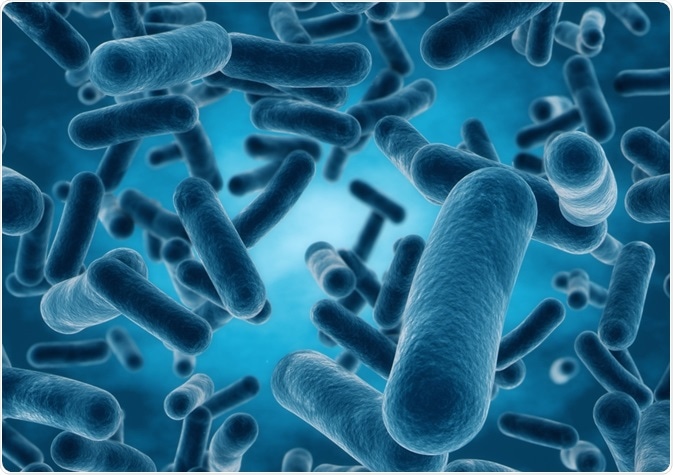 The cell-wall needs to be strong enough to counteract the effects of intracellular pressure as well as external pressures, but also needs to have flexibility so that cells can grow and divide; new cell-walls must be created in this process, and to ensure cellular integrity there are mechanisms in place to controls how and when parts of the cell-wall are broken down and re-modeled.

The main component of bacterial cell-walls is peptidoglycan; this is a mesh structure composed of a polysaccharide backbone made of a glycan (poly-[N-acetylglucosamine (GlcNAc)-N-acetylmuramic acid (MurNAc)]), which is cross-linked with short peptide bridges connecting the MurNAc residues.

A study by Vigouroux and co. investigated the role of class A penicillin-binding proteins in E. coli cell-wall shape formation and cell-wall repair. During cell-wall growth, two different enzymatic reactions are required; a transglycosylase reaction and a transpeptidase reaction.

Transglycosylase activity (transglycosylation) extends the glycan, and the transpeptidase reaction (transpeptidation) form the peptide crosslinks between the new glycan strands. In E. coli, this process is carried out by two different “machinery” formed by the combination of various proteins.

In the study, Vigouroux and co. found that class A penicillin-binding proteins inserted new peptidoglycan in areas of the cell-wall which were defective through their intrinsic transglycosylase and transpeptidase activities.

What mechanisms are in place to counteract the effects of β-lactam damage? – example in Pseudomonas aeruginosa

As mentioned above, β-lactam antibiotics disrupt the peptidoglycan and cause the formation of long un-crosslinked glycan strands. A protein in Pseudomonas aeruginosa, Slt, is thought to repair this defect caused by β-lactam antibiotics by a “lytic transglycosylase”, Slt.

In a study by Lee and co., Slt was shown to carry out an exolytic and endolytic reactions, which cleaves glycosidic bonds within the glycan either at the end (exolytic) or the middle (endolytic). The long glycan chain formed by the presence of β-lactam antibiotics is the initial substrate for the endolytic reaction in Slt.

The resulting products then serve as the substrate for the exolytic reaction in Slt, generating the product Ilpa. When IlpA is internalized, a signaling cascade is triggered resulting in the expression of β-lactamases, which confer resistance to β-lactam antibiotics.

Therefore, Slt not only counteracts the cell-wall defects caused by β-lactams by breaking up the long glycans but also triggers resistance to β-lactam antibiotics.

Yeasts are unicellular fungi and they also have a cell-wall, but this differs from bacterial cell-walls. The cell-wall in Saccharomyces cerevisiae consists of polysaccharides (β-1,3-D-glucan, β-1,6-D-glucan, and chitin) and glycoproteins.

The polysaccharides are thought to form the structure of the cell wall, while the glycoproteins are important in adjusting the permeability of the cell wall. As in bacteria, the cell-wall served to maintain the shape of the cell and to protect the cells from internal and external pressures.

This signaling cascade not only controls the expression of enzymes involved in cell-wall synthesis and other cell-wall associated genes, but also the polarization of the actin cytoskeleton. One such example is the CWI signaling pathway, which is active during cell division but also can be activated by damage to the cell-wall.

Dr. Maho Yokoyama is a researcher and science writer. She was awarded her Ph.D. from the University of Bath, UK, following a thesis in the field of Microbiology, where she applied functional genomics toStaphylococcus aureus . During her doctoral studies, Maho collaborated with other academics on several papers and even published some of her own work in peer-reviewed scientific journals. She also presented her work at academic conferences around the world.