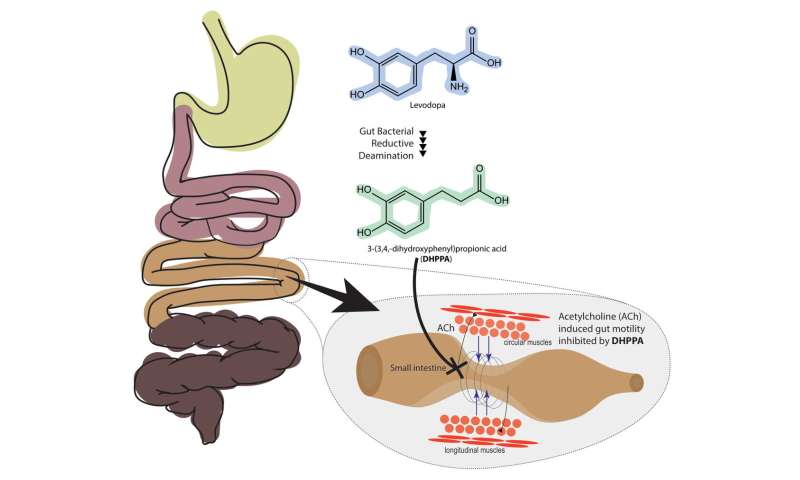 Bacteria in the small intestine can deaminate levodopa, the main drug that is used to treat Parkinson’s disease. Bacterial processing of the unabsorbed fractions of the drug results in a metabolite that reduces gut motility. These findings were described in the journal BMC Biology on 20 October by scientists from the University of Groningen. Since the disease is already associated with constipation, processing of the drug by gut bacteria may worsen gastrointestinal complications.

Patients with Parkinson’s disease are treated with levodopa, which is converted into the neurotransmitter dopamine in the brain. Levodopa is absorbed in the small intestine, although not all of it. Eight to ten per cent travels further to a more distal part of the gut and this percentage increases with age and administered drug dosage. In this distal part of the gut, it may encounter bacterial species such as Clostridium sporogenes, which can deaminate (remove an NH2 group from) aromatic amino acids.

“Last year, other scientists demonstrated this bacterium’s deamination activity on aromatic amino acids,” says Sahar El Aidy, assistant professor of Microbiology at the University of Groningen. El Aidy knew that the chemical structure of levodopa is similar to that of the aromatic amino acid tyrosine. “This suggested that the bacterium could metabolize levodopa, which may affect the intestinal motility of individuals with Parkinson’s disease.”

Studies by El Aidy and her research team revealed that the bacterium C. sporogenes does indeed break down levodopa into 3-(3,4-dihydroxy phenyl)propionic acid (DHPPA). “This process involves four steps, three of which were already known. However, we uncovered the initial step, which is mediated by a transaminase enzyme.”

Next, the team investigated whether DHPPA has an effect on motility of the distal small bowel, using an ex vivo model system for gut motility. Gut motility was induced by adding acetylcholine, after which DHPPA was added. “Within five minutes, this decreased the motility by 69 percent, rising to 73 percent after ten to fifteen minutes.” This clearly showed that the levodopa metabolite can reduce gut contractions, which could lead to constipation.

To test whether these findings are relevant to Parkinson’s disease patients, Sebastiaan van Kessel, a Ph.D. student in El Aidy’s research team, tested patients’ stool samples for the presence of DHPPA. “Because it is also produced as a breakdown product of coffee and fruits, we compared samples from patients with those from healthy controls with a comparable diet,” explains El Aidy. The result showed significantly higher DHPPA levels in stool samples of Parkinson’s disease patients who were treated with levodopa. To confirm that this metabolite resulted from the presence and activity of the gut bacterium C. sporogenes, or other gut bacteria capable of anaerobic deamination, bacteria from stool samples were cultured and fed with the precursor of DHPPA. This experiment showed that the bacteria can indeed metabolize levodopa to produce DHPPA.