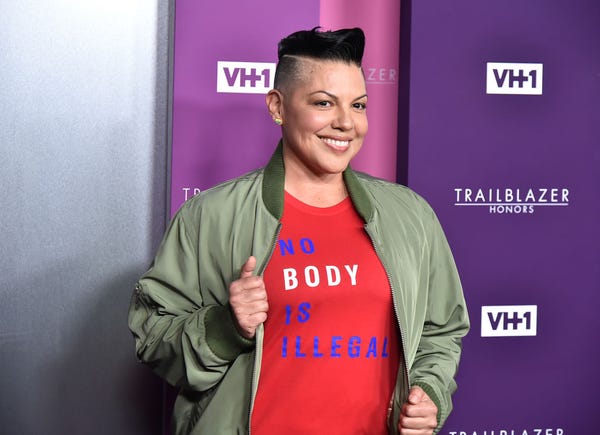 Sara Ramirez, an actor best known for her role as Dr. Callie Torres on "Grey's Anatomy" came out as nonbinary on Instagram Friday, writing "New profile pic. In me is the capacity to be Girlish boy, Boyish girl, Boyish boy, Girlish girl, All, Neither" and adding the hashtag #nonbinary.

New profile pic. In me is the capacity to be Girlish boy Boyish girl Boyish boy Girlish girl All Neither #nonbinary ♥️💛🤍💜🖤♥️

As of Sunday morning, the post had received over 216,000 likes. Miss Peppermint, a Black transgender drag queen starred in Season 9 of "Rupaul's Drag Race" said she was "so proud and happy" on Twitter.

Ramirez, 44, was born in Mexico and attended Juilliard. They're also a singer and songwriter who's performed on Broadway and won a Tony Award.

Torres, the "Grey's Anatomy" character Ramirez played for a decade, was bisexual and a love interest of Dr. George O'Malley (played by T.R. Knight) before marrying, and later splitting from, a female surgeon, Dr. Arizona Robbins (Jessica Capshaw).

Ramirez's complex portrayal was applauded again by fans of the show after the actor came out as nonbinary Friday.

One Twitter user wrote, "As an Afro latinx bisexual person there wasn't a lot of representation growing up, and Sara was that for me on Greys … as I've grown I realized I'm nonbinary and so to see this just …warms my heart so much good for them, everyone deserves to be free."

Ramirez has long been an advocate for LGBTQ rights, receiving an Ally for Equality Award from the Human Rights Campaign Foundation in 2015. They first came out as queer and bisexual in 2016.

The nonbinary identity has increased visibility

Nonbinary is a gender identity, which is different from sexual orientation and the sex people are assigned to at birth.

It means identifying as a gender other than male and female, and sometimes identifying as neither or a mixture of both genders at the same time, according to the National Center for Transgender Equality.

People who are nonbinary may go by the pronouns "they/them" rather than "he/she."

The nonbinary identity is increasingly visible, with a January 2019 Pew Research survey finding that a third of teens and people in their early 20s know someone who uses such gender-neutral pronouns.

Janelle Monae came out as nonbinary in January and other celebrities, including Indya Moore and Sam Smith, are nonbinary. The pronoun "they" was even named word of the year in 2019 by Merriam Webster.