Fatal fungi: World Health Organization releases first ever list of fungal pathogens that are ‘becoming a threat to humanity’

A list of more than a dozen fungi that pose a threat to public health was published today by the World Health Organization (WHO).

The global health agency has named 19 ‘priority pathogens’ that are growing and becoming resistant to treatments, including yeasts and molds.

Fungal infections are responsible for roughly 1.7million deaths and over 150million severe infections worldwide every year.

But the infections — which spread in hospitals and can be deadly for immunocompromised people — became more prevalent during the pandemic.

The pathogens prey on people with weakened immune systems including those battling COVID-19. Treatments for Covid, including steroids, can further weaken the body’s defenses against fungi.

The WHO publishes a similar list of most threatening bacteria and cited a general lack of investment in studying dangerous fungi as a reason for compiling the fungal priority pathogens list.

Fungal pathogens remain a major public health threat yet too few resources are spent on developing effective antifungal medications, the WHO said.

A historic dearth of research into fungal pathogens has left gaps in knowledge about diagnostics and viable treatments. 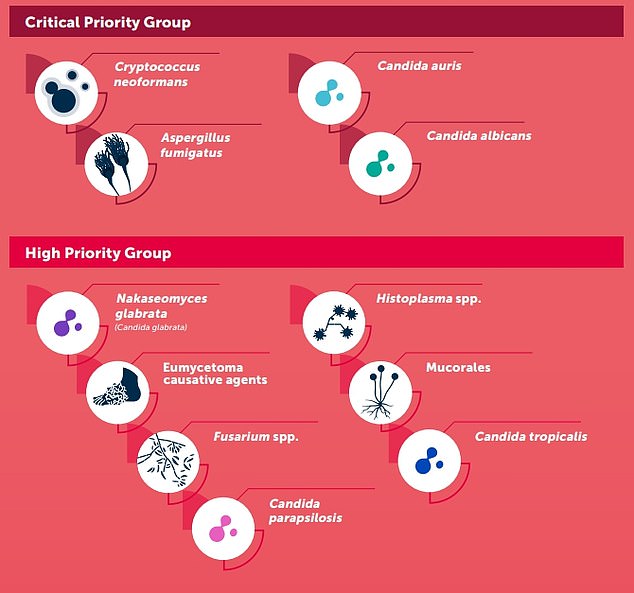 The different fungi included in the list represent ‘priority pathogens’ including yeasts and molds that are commonly found in the environment and our own bodies.

The health body advised governments to bolster their systems for monitoring dangerous fungi and responding to the 19 varieties included in the list.

An every-warming planet means that fungi are continuously adapting to rising temperatures in ways that make them more adept at infecting people.

Global warming alters the attributes of the fungus, its environment, and its host, increasing the likelihood that novel varieties of fungi will emerge.

Infections due to these dangerous opportunistic pathogens exploded during the Covid pandemic.

The health body divided the 19 types of fungi among three priority groups ranked high to low. 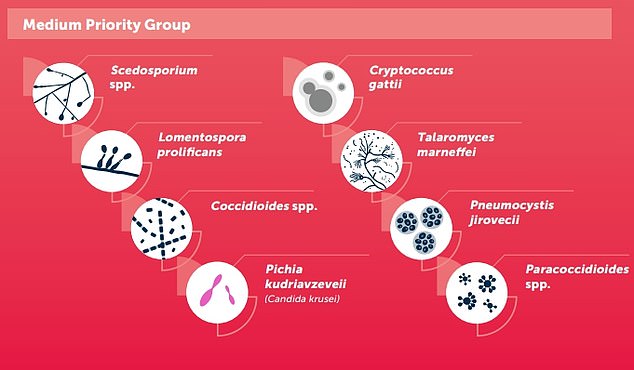 Dr Neil Stone, Consultant in Infectious Diseases and Microbiology at University College London Hospitals said: ‘Finally the threat of fungal infection has been raised as a priority issue which is long overdue.’

‘Fungal infections have always been a threat but historically have been grossly neglected when it comes to public awareness and clinical research funding… As a result, diagnosis and treatment of fungal disease remains far behind that of bacterial disease.’

Fungi the WHO wants to warn you about

Aspergillus produce spores that spread in the air and can threaten the lung health of people with compromised immune systems.

Candida albicans is commonly found in the gut but could cause invasive infections in immunocompromised people. It can cause an asthma-like illness, pulmonary fibrosis or a non-cancerous tumor.

Cryptococcus neoformans can cause deadly brain infections. Globally, it is a major cause of illness in patients with HIV/AIDS and kills at least 180,000 people annually.

The mortality rate of C.Auris, which spreads quickly in healthcare settings, can be as high as 60 per cent.

There are just four categories of antifungal medications available and there are very few in the development pipeline.

Prof Jon Cohen, an infectious disease expert at Brighton and Sussex Medical School in the UK said: ‘While the problems associated with bacteria, especially resistance to antibiotics, have become well known, and of course viruses such as COVID have claimed huge public attention, serious infections caused by fungi have received far less attention.’

He added, ‘They are less common than other types of infection but can cause extremely serious disease or death, and there are frequently far fewer treatment options.’