Every time the coronavirus replicates, it has a chance to mutate. And given that it is currently rampaging around the world, it has plenty of opportunities to do just that.

Many mutations will make little or no difference to the virus’s ability to spread or cause more severe disease. Others will make it less likely to spread—those mutations are more likely to die out. But some will make the virus more deadly or more transmissible. These are the mutations we need to worry about.

On the afternoon of Friday 18, December, the UK government was alerted to the possibility that a new variant of the coronavirus circulating in the UK was 70% more transmissible than previously dominant variants.

Without any control measures (such as social distancing or wearing a mask), in a wholly susceptible population each person newly infected with the previously dominant variant of the virus would pass it on to three others (known as the basic reproduction number or R0). With a 70% increase in transmissibility, the number of people each person might infect, in the absence of control measures, increases to around five.

Fortunately, we have taken preventative measures to reduce the reproduction number (R) and slow the spread of the virus. However, even if these control measures were enough to reduce the previous variant’s R to 1 (the critical value below which infections start to fall), they would only reduce the new variant’s R to 1.7. Every ten people infected would infect 17 others and infections would spread exponentially.

In short, this increased transmissibility looked like really bad news. The hard lockdown the UK undertook last spring was thought to be enough to reduce R for the old variant to around 0.6. A 70% increase in transmissibility would mean that it was questionable whether even restrictions as tight as the ones the UK implemented in the spring of 2020 would be enough to suppress the spread of the new variant. 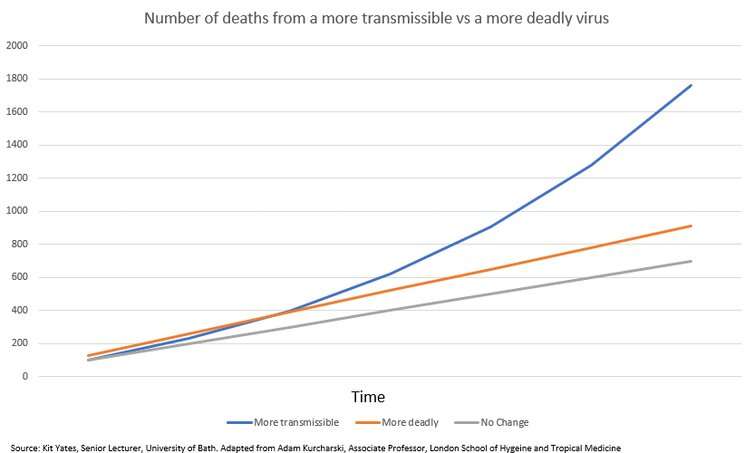 There is no evidence to suggest that the UK variant makes any of the approved vaccines less effective, (although there is reason to believe the new South African variant may render existing immunity less effective). There is also no reason to think that B117 is any more deadly than other variants.

Indeed, news of the increased transmissibility of the new variant is often accompanied by a seemingly reassuring mention that the variant is not more deadly. Many news outlets have cited the “law of declining virulence”, which suggests that a more transmissible variant will be associated with milder illness. The idea behind the theory is that viruses that evolve to be more deadly will wipe out their host before being passed on, limiting chains of transmission and causing the variant to die out.

Unfortunately, given the long infectious period of COVID-19, the potential for asymptomatic transmission, and the length of time between infection and death, there is no reason why this rule of thumb should hold. But given that we have a more transmissible variant that does not appear to be more deadly, should we be happier about this than if it were the other way around?

In fact, even a 30% more transmissible variant can be way worse than a variant that is 30% more deadly. At the heart of this counter-intuitive assertion lies an old foe that has plagued us right from the start of this pandemic: exponential growth. Here’s a simple thought experiment that helps to explain why.

Imagine the old variant spreading under measures that have reduced R to 1. Starting with 10,000 infected people, every generation interval (time becoming infected and infecting someone else) they will infect 10,000 more. Of everyone that gets infected, let’s assume that 1% of them will die. After ten generations, 100,000 new infections will have occurred leading to 1,000 deaths.

With a variant that is 30% more deadly, the same number of infections will occur, but they will lead to 1,300 deaths. Yet with a variant that is 30% more transmissible but not more deadly, because cases will grow exponentially, the eventual death toll over the same period stretches to over 4,200. The longer this goes on for, the bigger the death toll discrepancy between the more transmissible and the more deadly strain becomes.