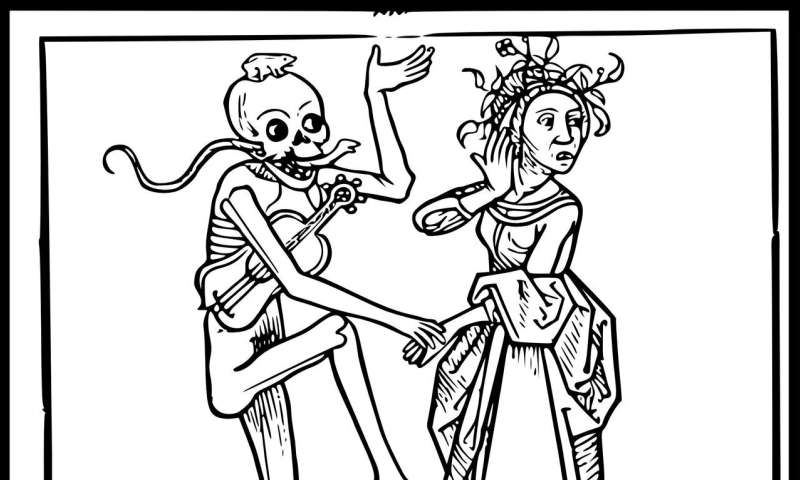 Following is a short question-and-answer piece with the University of Rhode Island Department of History’s Joëlle Rollo-Koster, professor of medieval history. She discusses the Black Death, a devastating global pandemic that swept across Europe and Asia in the Middle Ages. She also discusses similarities between it and today’s global pandemic, COVID-19, and what can be learned from history.

What are the similarities between the Black Death and what we are experiencing now?

Like COVID-19, the Black Death was insidious, unpalatable, and invisible, and it came from the East. Of course, the pathogen is totally different today, we are dealing today with a virus versus a bacterium in the past. There were three forms of yersinia pestis, bubonic (the most common), pneumonic, and septicemic. You could survive the first, you died quickly in the second and third cases. They called the disease the “mortality” in the Latin of the time, mortalitas.

The disease surrounded humans who were at a loss to identify where it came from … somewhat like today. Folks presumed it was God’s wrath, or bad air (miasma) caused by volcanoes, or the conjunction of certain stars. Some others thought that people like beggars, lepers or Jews had willingly and purposefully poisoned the area.

The idea that it was in the air circulated at a time when the concept of “infection” and “infectious diseases” did not exist. People made masks with good smelling herbs/flowers that they kept under their nose in order to ward off the disease similar to the “masks” of today.

However, unlike today’s COVID-19, those in the Middle Ages did not know that it had moved from animals to humans.

To a large measure we encounter the same overreaction and scapegoating. Today, it is the “fault of the Chinese” versus the fault of any “others” in the past. The disease spread like wildfire through a society that had already suffered malnutrition due to food shortages and famines of the 1310s and 1320s as a result of climate change. Like COVID-19, the Black Death affected concentrated populations in cities and towns and followed the course of international trade. In 1348 it affected the young, old, and poor.

How did society recover from these outbreaks? What were the lasting repercussions?

In the short term there was profound psychological uncertainty. Life was seen as cheap. Extreme attitudes on either end of the spectrum were adopted by some—ranging from hedonism to asceticism, including groups of flagellants circulating through cities. And of course, many looked for scapegoats.

In the longer term, the repercussions were staggering. There was an enormous loss in population, some villages had 100% death rates. On average one-third to one-half of the population was lost. Demographic changes caused upheavals in economic and social structures and signaled the end of “manorialism” and feudalism. People stopped working the land of lords in exchange for protection and started getting paid for working. So this was birth of wage labor. Monarchies like England fought the change, but it happened.

Wages increased as did a high demand for luxury goods. Some aristocrats became impoverished as result of lost rents. They sometimes overreacted and tried to increase pressures on the peasantry, who, in turn, rebelled. Examples of this include the French Jacquerie, a peasant revolt of 1358. Urban revolts like the Ciompi in Florence, in 1378, wanted political representation for the working poor, and the English Peasants’ Revolt of 1381, demanded the end of servitude and feudalism. All revolts were crushed violently.

Family structure also changed. Men began to marry younger. There was also a gendering of the workplace which led to women losing jobs they used to do, for example bread and beer making, to men.

Following the plague, a general obsession with death also developed—or as it became known, Ars moriendi, the art of dying well. Society became more human/people centered rather than otherworldly. The allegorical concept, La Danse Macabre, or the dance of death, saw the universality of death as something that united rich and poor, old and young—it was a great leveler.

What can we learn from these previous experiences in terms of what was handled well and what wasn’t?

Quarantines can work. They were used in the Middle Ages. Fear mongering and scapegoating do not.

If history is any guide, how do you see the United States (or the world) getting through this? What should we be prepared for?