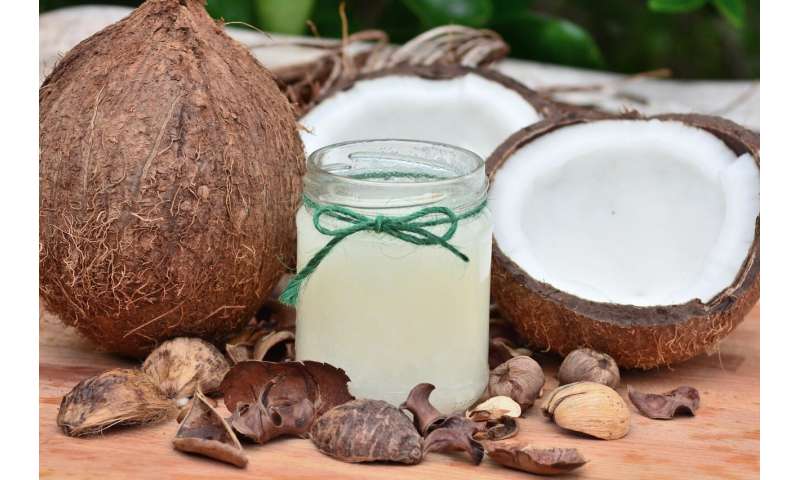 Obese females that ate a small amount of coconut oil daily, even as part of a high-fat diet, had decreased features of metabolic syndrome, a cluster of risk factors that raise the chances of developing diabetes, heart disease and stroke, an animal study finds. The study results were accepted for presentation at ENDO 2020, the Endocrine Society’s annual meeting, and will be published in a special supplemental section of the Journal of the Endocrine Society.

“Our controlled experimental study suggests that coconut oil may not be bad for cardiometabolic health, contrary to what previous studies have concluded,” said the study’s lead investigator, Annie Newell-Fugate, D.V.M., Ph.D., an assistant professor at Texas A&M University in College Station, Texas.

Nearly 40% of U.S. adults meet the criteria for obesity, the Centers for Disease Control and Prevention reports. One in five Americans has metabolic syndrome, which is linked partly to obesity, according to the Endocrine Society’s Hormone Health Network. Adding to the problem, Newell-Fugate said, is that the typical Western diet may contain 40% or more fat.

The researchers wanted to learn whether eating a small amount of coconut oil could improve metabolism, despite consumption of a Western-style diet in which 49% of daily calories came from fat. Their study used an animal model of reproductive-age women with obesity and metabolic syndrome: sexually mature, female mini-pigs fed a high-fat, high-fructose diet resembling a Western diet. For eight months, two groups of pigs ate this high-fat diet consisting of 4,500 calories a day, but the groups differed by the type of one saturated fat. One group’s food included 5% animal lard, which Newell-Fugate said some U.S. regions and ethnic cultures commonly use for cooking. The other high-fat diet group received 5% nonorganic coconut oil instead of lard in their food. A third group of pigs ate a low-calorie, lean diet as a control.

Although both groups fed the high-fat diet became obese, the pigs that received coconut oil had lower cholesterol and blood glucose (sugar) levels compared with the pigs that ate the lard-supplemented diet, Newell-Fugate reported. Also, the coconut oil group had less evidence of fatty liver disease and less deep belly fat than the lard group.

“Our research suggests that coconut oil may be used with lifestyle modifications and anti-diabetic drugs to treat metabolic syndrome, at least in women with obesity,” Newell-Fugate said. She added that they do not know if their findings also apply to men.