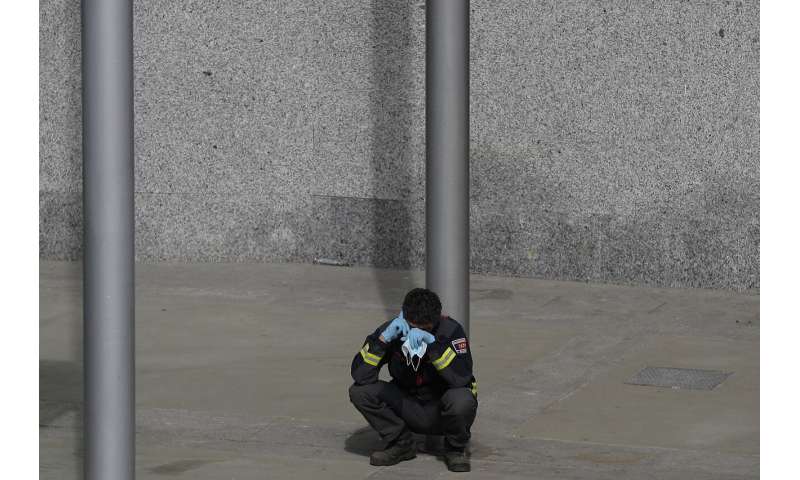 There’s a bookshelf filled with donated novels. Hotel toiletries rest on cardboard boxes turned into bedside tables. Meals are served with personalized notes from the staff. And an army of volunteers do their best to keep up an air of optimism amid the pandemic.

At a cavernous convention center that has become Spain’s largest makeshift hospital, these touches of kindness and camaraderie are helping to make the days and nights more bearable for patients afflicted with COVID-19.

“Despite the distance that we keep from each other, there is a sense of community,” said Jonan Basterra as he waited for the oxygen in his blood to reach a level high enough so he can go home.

The 50-year-old patient dreams about defeating the virus so he can shave off the beard he has grown and celebrate with ice cream. In the meantime, he rests in bed No. 15.18, making friends with others or reading the books that a nurse brought from home and offered in an improvised open library.

“We are all in this together and we are all going to get out of here together,” he told The Associated Press via video call shortly before he was delivered a potato omelet—one of Spain’s national dishes—with a personalized note from the hospital’s makeshift kitchen. The cooks had learned on social media about Basterra’s craving for the food. 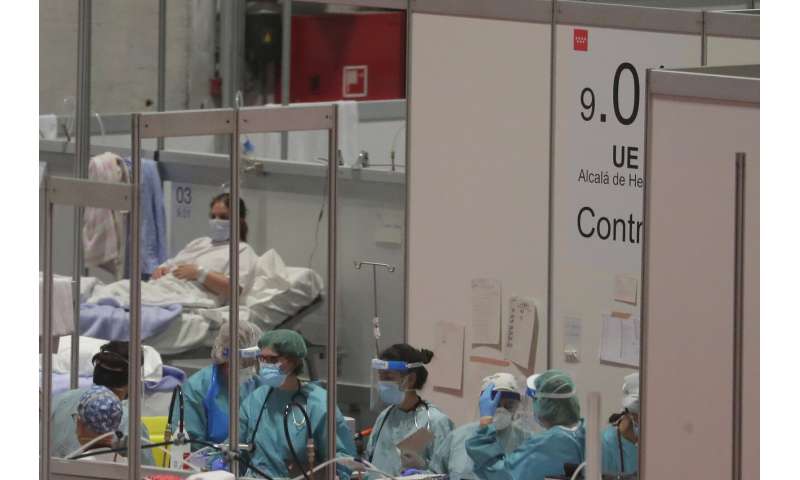 Most of the 1,850 patients brought to the Ifema field hospital are not in serious condition. In fact, 800 had been discharged by Thursday, although six have died since doors opened 12 days ago.

But the facility is helping to free up space in overburdened hospitals nearby. Madrid has recorded nearly 4,500 of Spain’s 11,000 deaths, so many that a new ice skating rink was being prepared on Friday to receive bodies, the third temporary morgue in the region.

The two large halls that normally host traders and booths with corporate displays now have 1,300 regular beds and 16 intensive care units. Rows of beds are separated by panels, some of them still bearing photos of machinery or resorts from past conventions. Outside, medical workers take breaks by basking in the sun near three food trucks. A soldier smokes a cigarette while pop music blasts from speakers.

Only four months ago, politicians and activists like Greta Thunberg roamed the same grounds for a U.N.-sponsored climate change summit that relocated to Madrid from protest-hit Chile. 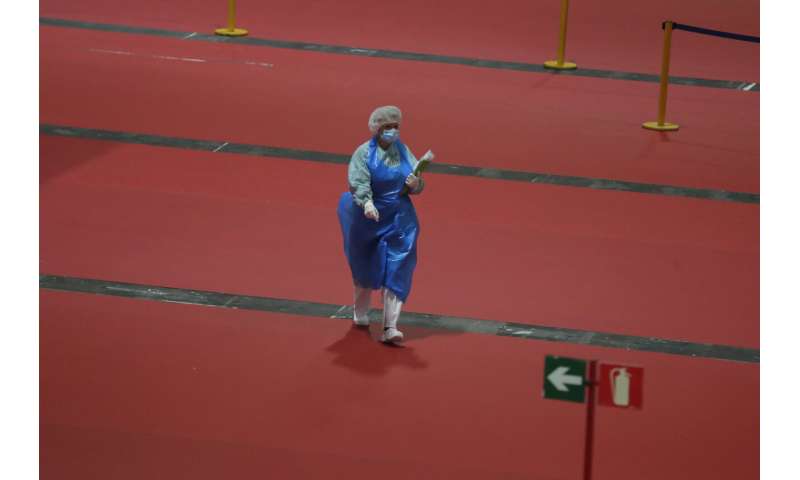 That seems a world away now. When Spaniards come to their windows each evening to honor weary doctors and nurses risking infection, the silence at the makeshift hospital is broken by applause from the patients. On a recent night, speakers played the 1960s Spanish pop song “Resistiré” (“I Will Resist”) that has become an anthem during the outbreak.

Among those applauding was Esteban Pinadero, in bed No. 01.18. The 87-year-old was moved from a crowded hospital to Ifema on Wednesday. But his family couldn’t find him until a volunteer finally brought him fresh batteries for his hearing aid. His daughter, Vicki, told AP how she contacted Basterra through social media and managed to arrange a video call with her father.

“I’m very good, I love you,” Pinadero told half a dozen relatives on the call in a recorded video that the daughter shared with AP. With his face half-hidden by a surgical mask, Pinadero joked: “I will run away as soon as I can.” On the other side of the screen, relatives could be seen sobbing.

“Everybody here misses the nonverbal language, the physical touch, the smiles that are hidden by the masks,” said Dr. Jesús San Román, who runs an improvised call center at the facility. 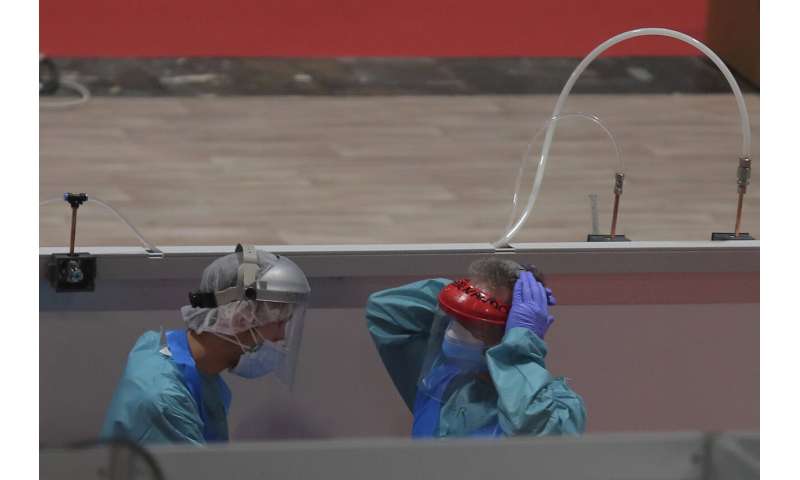 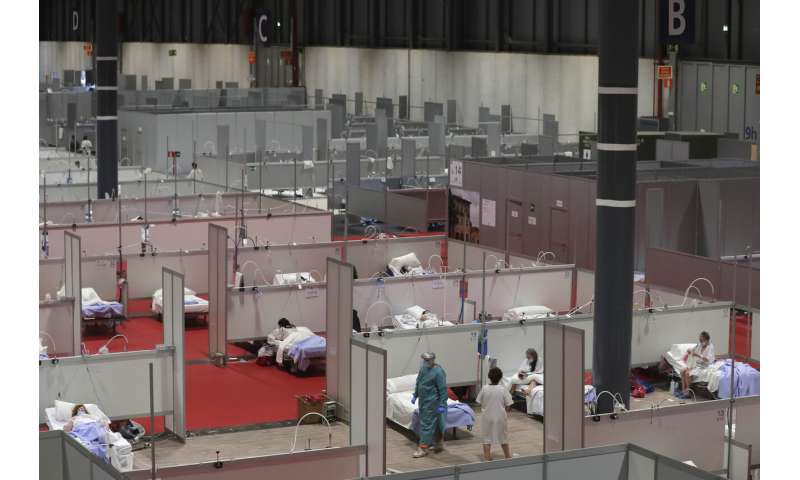 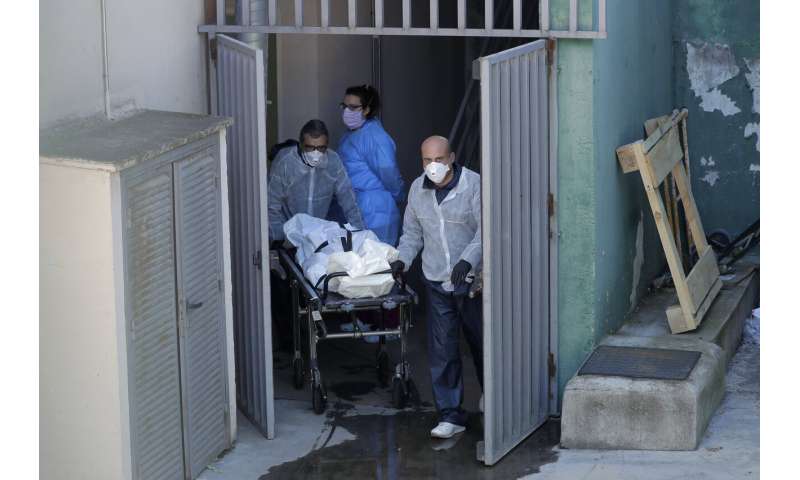 Recent medical school graduates volunteer to keep relatives of the patients updated on their condition by phone, a far cry from the face-to-face communication that San Román is used to at his regular hospital job.

“But here we try our best to overcome that, with video calls and lots of personal involvement,” he said.

Despite those efforts, the tragedy of the outbreak is never far away.

Four rooms in the facility are labeled with signs that read, “Information for relatives.” The door leads to a space divided by a curtain, one side with a bed, the other with chairs.

This is where the dying are taken for a final moment of privacy with their family, explained Dr. Antonio Zapatero, the field hospital’s director, adding that it’s the only time when visitors are allowed in the facility.

The rooms were used for the first time this week.