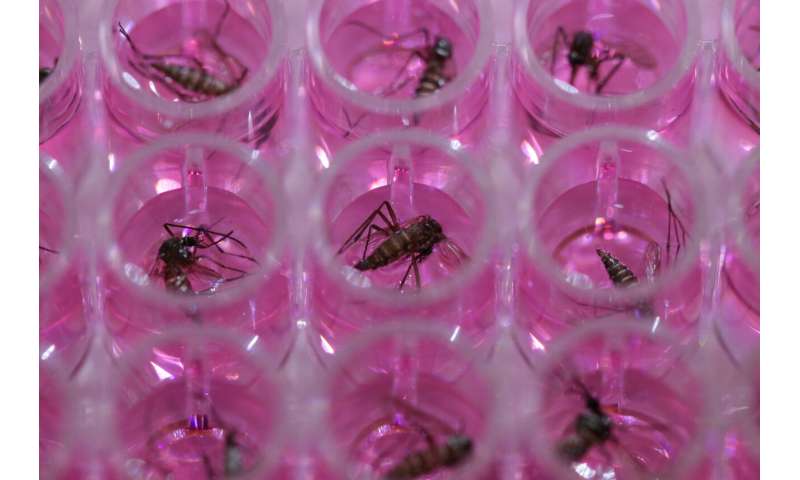 The thread-like parasite Dirofilaria immitis, causes canine heartworm, a debilitating disease in dogs. A related parasite, Brugia malayi, infects humans and is one of the parasites responsible for lymphatic filariasis, a neglected disease that affects 120 million and can give rise to elephantiasis, characterized by disfiguring and painful swollen limbs.

Both conditions, caused by filarial parasites, are spread by the bite of a mosquito. And new research led by the School of Veterinary Medicine’s Michael Povelones targets the mosquito itself as a means of bringing disease transmission to a halt.

Studying a strain of Aedes aegypti mosquito that is resistant to infection with the heartworm parasite, the researchers discovered that this quality correlates with a hyper-charged immune response. By activating this immune system defense in otherwise-susceptible mosquitoes, they were able to stop parasites—both D. immitis and B. malayi—from developing into a transmissible form in the insects. Such a blockade could stop filarial parasites from passing to dogs or humans. They shared their findings in Proceedings of the National Academy of Sciences.

“Heartworm is everywhere; in some places if you don’t give dogs a preventive drug they’re almost definitely going to get heartworm,” Povelones says. “On top of that there is emerging drug-resistant heartworm parasites in certain areas. All of that makes the mosquito seem an attractive target to make inroads into these problems and prevent disease transmission.”

Although the parasite that causes lymphatic filariasis behaves slightly differently within the mosquito than the heartworm parasite, Povelones was encouraged that the same immune system activation strategy was able to significantly tamp down the ability of mosquitoes to pass along either parasite.

“People are starting to look at these solutions that focus on the mosquito in diseases like malaria and dengue,” he says. “I don’t think it’s disingenuous to say that these kinds of approaches could be used, perhaps in a locally targeted way, to stop heartworm or lymphatic filariasis.”

For half a century scientists have known that certain strains of mosquitoes lack the capacity to transmit the heartworm parasite. Povelones’s group, in an effort led by research technicians Elizabeth B. Edgerton and Abigail R. McCrea, has tried to distinguish what gives these “refractory,” or resistant, mosquitoes their ability to block infection.

Comparing gene expression profiles between the refractory and the susceptible mosquitoes, they zeroed in on a set of immune genes that were turned on particularly strongly in the refractory insects during D. immitis infection.

“Their baseline immune response wasn’t different,” says Povelones. “But when they were infected, the refractory mosquito mounted a much more robust immune response. That led to the overall hypothesis for the study, which was: If we boosted the immune system of the susceptible mosquitoes, could we make them refractory?”

The gene expression data pointed researchers to two immune-system pathways as potentially being involved in the parasite-triggered activation: the Toll and IMD signaling pathways. The researchers selectively enhanced these pathways one at a time, looking for changes in how the mosquitoes responded to parasite infection.

This aspect of the work took advantage of a deceptively simple technique, developed by Povelones’s departmental colleague and study co-author James “Sparky” Lok, to coax parasites from a mosquito in the absence of a host. Simply placing infected mosquitoes in a warm medium triggers the parasite to rupture from the mosquito’s proboscis, or needle-like mouthpart—likely because the warmth replicates the feeling of landing on the warm body of a potential host. Doing so allowed the researchers to precisely count the number of parasite larvae that are competent to emerge from an infected mosquito; a proxy for its ability to infect a host.

When the team fed mosquitoes that are susceptible to D. immitis a blood meal containing the parasite, then activated the Toll signaling pathway, they found a dramatic drop in the number of emerging parasites. Activating the IMD pathway didn’t seem to make a difference, so their follow-up experiments narrowed in on the Toll pathway.

“The question then was, what was happening to the worms that didn’t emerge?” says Povelones.

To answer that the Penn Vet team looked various tissues in the mosquito, and discovered the “lost” parasites in the Toll-activated insects were getting stuck in the Malpighian tubules, the mosquito’s renal organ. They further noticed that while normal mosquitoes had long, slender parasite larvae in their Malpighian tubules that had developed to a stage resembling those that infect a dog, the parasite larvae in the Toll-activated mosquitoes were stunted and underdeveloped, an indication that parasite development was being hampered by the mosquito’s immune system.

In a final set of tests, the researchers showed that activating Toll signaling in mosquitoes could also block the development of B. malayi, even though that parasite doesn’t develop in the Malpighian tubules.

“They weren’t totally cleared of the infection but it was a highly significant reduction,” says Povelones. “I think in the future the heartworm and the lymphatic filariasis models will be really helpful to each other.”