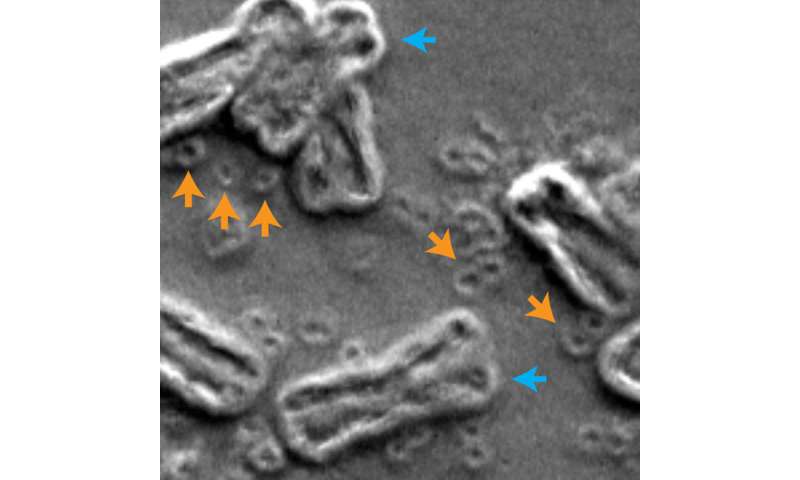 Deoxyribonucleic acid or DNA encodes information, not only in its sequence but also in its shape. Building upon previous revelatory work, a team of scientists, led by researchers at University of California San Diego, the UC San Diego branch of the Ludwig Institute for Cancer Research, Stanford University and the Howard Hughes Medical Institute, report that in cancer, distinct doughnut-shaped circles of extrachromosomal DNA (ecDNA) are found abundantly in human tumor cells; change how cancer-related oncogenes are expressed; promote aggressive malignant behavior; and play a key role in the ability of tumors to evolve quickly and resist threats, such as chemotherapy, radiation and other treatments.

The findings are published in the November 20, 2019 online issue of Nature.

“This is a paradigm-shift. The shape of cancer ecDNA is different than normal DNA, and that has really important implications, both for our understanding of cancer biology and clinical impact,” said Paul S. Mischel, MD, professor in the UC San Diego School of Medicine Department of Pathology and Ludwig member.

Mischel is co-senior author of the study with Vineet Bafna, Ph.D., professor of computer science and engineering at Jacobs School of Engineering at UC San Diego; Howard Y. Chang, MD, Ph.D., Ludwig Professor of Cancer Genomics and of Genetics at Stanford University and the Howard Hughes Medical Institute; and Bing Ren, Ph.D., professor of cellular and molecular medicine at UC San Diego School of Medicine and Ludwig member.

Human DNA typically forms long, twisting double helices of genetic material: roughly 3 billion base pairs organized into 23 pairs of chromosomes miraculously squeezed into every cell nucleus, each averaging just six micrometers in diameter. (Laid out end-to-end, all of the DNA in a single cell nucleus would extend roughly six feet and all of the DNA in one person’s body would span roughly twice the diameter of the solar system, more than 7 billion miles.)

In humans and other eukaryote organisms, normal DNA is packed into cell nuclei by tightly wrapping it around closely bunched clusters of protein complexes called histone octamers. In order to access and read DNA’s genetic instructions, cells rely on enzymes and complicated machinery to cut and move bits and pieces, making only portions accessible at a time, not unlike reading a partially opened scroll.

But cancer cells, the researchers report, share some similarities with bacteria, which contain circular DNA that is generally more accessible. To investigate how the shape of ecDNA impacts function, the research team developed topographically informed circular maps of oncogenic extrachromosomal DNA. They found that circular ecDNA in cancer, although wound around protein cores, is highly accessible, allowing for more access points and places where genetic information can be quickly transcribed and expressed. This feature enables tumor cells to generate massive amounts of growth-promoting oncogenes—and evolve more quickly and respond more forcefully to their changing environment and potential threats.

“By showing that ecDNA is circular, then elucidating its epigenetic organization, we demonstrate something very powerful,” said Mischel. “This unique shape in human cancer cells is quite unlike normal human DNA. It really shines a new light onto the 3-D organization of the screwed-up cancer genome and epigenome, which now provides a mechanistic basis for understanding why certain tumor cells are so aggressive.”

The findings build upon research published in 2017 reporting that short fragments of circular DNA encoding cancer genes were far more common than previously believed—detected in nearly half of human cancers but rarely in normal cells—and likely to play a key role in how tumors evolve and resist threats, such as chemotherapy.

Extrachromosomal DNA had been thought to be rare, but in a 2014 paper, Mischel and colleagues discovered that ecDNA plays a central role in the drug resistance of certain brain tumors by enabling tumors to rapidly change the amount of oncogenes they contain—and determine whether a cell transforms into a tumor cell. The finding surprised cancer biologists who had long focused more on which genes promote cancer rather than where those genes are located.

The latest findings dramatically underscore how cancer cells don’t play by the same biological rules as eukaryotic cells. Rather than passing DNA to subsequent generations by dividing into genetically identical daughter cells—a process called mitosis, involving paired chromosomes that divide and used by all eukaryotes—bacteria and cancer propogate by parceling out ecDNA to daughter cells in a seemingly random way, providing a mechanism by which certain daughter cells could receive multiple cancerous copies within one cell division. It is a distinctly different process of inheritance which allows for more rapid evolution and genetic change.