Researchers from the Hong Kong University of Science and Technology (HKUST) and Beijing Tiantan Hospital have recently uncovered a new gene mutation responsible for the non-familial patients of cerebral cavernous malformation (CCM), a brain vascular disorder that affects about 10–30 million people around the world.

While the mutation of three genes, namely CCM1, CCM2, and CCM3, were known to be a cause of CCM, they mostly targeted patients with a family history of this disorder, who only account for about 20 percent of the total inflicted population. The cause for the remaining 80 percent of non-familial cases, however, furadantin recommended dosage was not known.

Using next-generation sequencing and computational approach, a research team led by Prof. WANG Jiguang, Assistant Professor from HKUST’s Division of Life Science and Department of Chemical and Biological Engineering, in collaboration with Prof. Cao Yong from the Beijing Tiantan Hospital, analyzed the genomic data of 113 CCM patients and identified another mutation called MAP3K3 c.1323C>G, which is responsible for almost all the tested cases involving popcorn-like lesions in their brain arteries—the most common type among the four types of CCM lesions (type II CCM).

At present, magnetic resonance imaging (MRI) is a commonly used noninvasive technique for diagnosis and treatment. However, the MRI images can only reveal the size and type of the lesions, but not the gene responsible for the problem—which can only be ascertained by surgery and laboratory tests. Now, the HKUST research team designed a computational method that could help assess the probability of connection between the lesion shown in the MRI image to the genetic mutation MAP3K3 c.1323C>G. So CCM patients with this gene mutation may be able to receive more targeted treatment without having to undergo surgery, which carries serious risks, including cerebral hemorrhage or new focal neurological deficits. 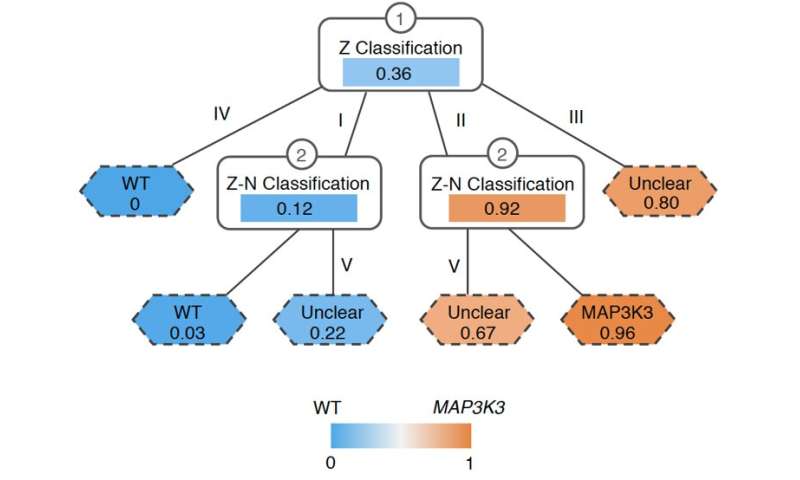 Prof. Wang from HKUST said, “Our research opens a new direction to the genetic landscape of CCM and uncovers clues to the correlation between MAP3K3 c.1323C>G gene mutation and type II CCM. The design of the computational method, or decision-tree model takes us a step closer to non-invasive diagnosis of CCM cause, and we hope the discovery could help pave way for candidate drug target and therapy development, bringing benefits to patients in the near future.”