Physicans tell us what it’s like to battle the new coronavirus in the epicenter of the U.S. outbreak.

In New York City, regular life has become surreal with a temporary hospital in Central Park and refrigerated trucks acting as morgues for overwhelmed hospitals.

Over 83,000 confirmed cases of COVID-19 and nearly 2,200 deaths make New York the hardest hit state by this pandemic.

Medical staff, EMTs, and other frontline workers report being overwhelmed by the outbreak.

New York City now has over 47,000 confirmed cases of COVID-19, about one quarter of the U.S. total. The highest number is in the borough of Queens, with nearly 15,000 cases.

According to official figures, as of April 1, the death toll in New York City stands at 1,139.

He wished to remain anonymous, not being authorized to speak for the hospital. 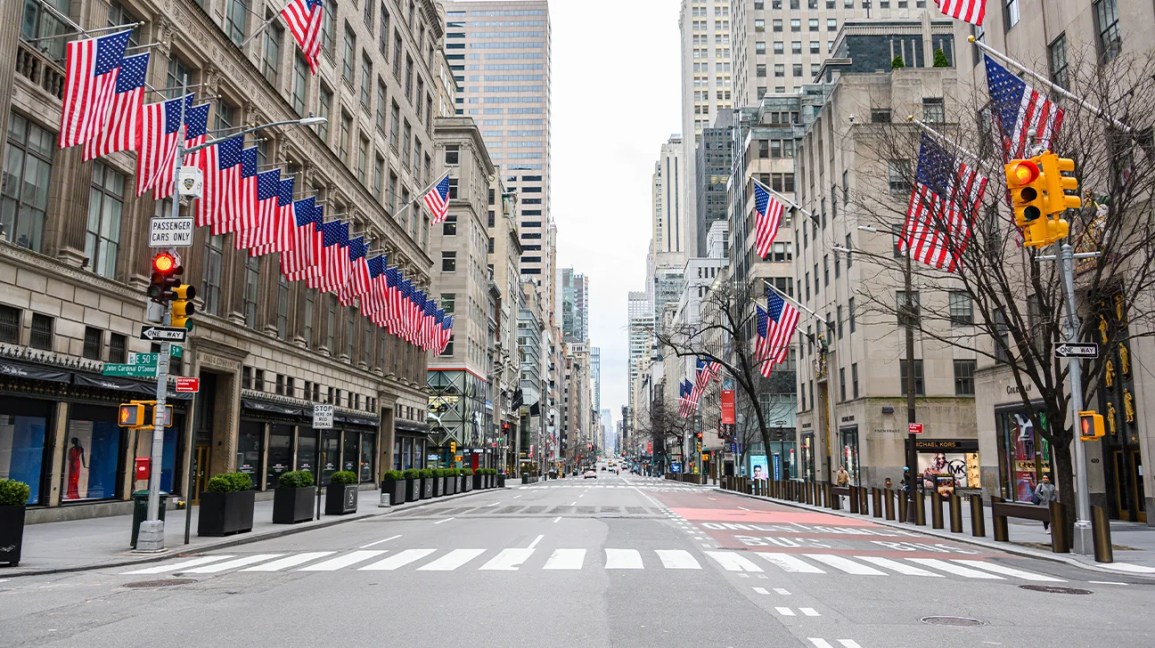 Dr. Kecia Gaither, MPH, double board-certified in OB-GYN and Maternal Fetal Medicine, is director of perinatal services at NYC Health + Hospitals/Lincoln, one of the premier trauma centers in the United States. She agreed to speak with Healthline about her experiences during the ongoing crisis.

When asked to describe what being on the front lines of this pandemic is like, she pointed to horror stories.

“I am a big Stephen King fan. This epidemic is something right out of his novel ‘The Stand,’” said Gaither, who’s based in the Bronx, where some of New York’s poorest neighborhoods are located.

“It’s surreal and frightening,” she said. “Not only do I have concerns for all of the patients, but I have concerns as to my health, and bringing this home to my family.”

Medical staff are facing enormous challenges not just at work but at home as they isolate themselves to keep their families safe.

“Once this pandemic began, I have isolated myself from my parents and family members — we talk/text daily. I am teaching them how to Skype, but there has been no contact for weeks,” Gaither said.

She also can’t understand why she still sees so many people not following social distancing recommendations — despite daily reports of deaths caused by the virus.

“What is not understood? Decreasing contact decreases viral spread, which decreases the number of patients presenting to a medical system that already is OVERWHELMED,” said Gaither. “Lives are being saved by social distancing — really the life that could be saved could be yours or a friend or family member. This isn’t a drill — this is real.” 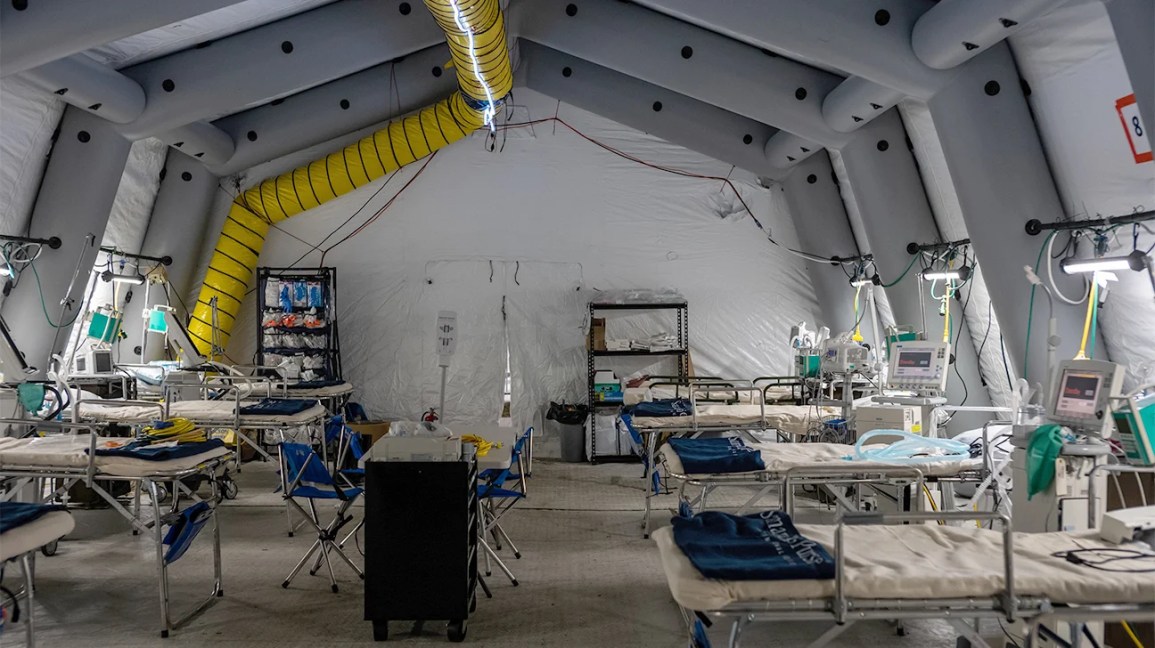 A makeshift hospital has opened in Central Park to treat people with COVID-19. Stephanie Keith/Getty Images

A “terrible toll” in Queens

Hospitals across New York are reporting increases in deaths from COVID-19, sometimes overwhelming the hospital morgues.

Now, refrigerated trucks have popped up at hospitals where bodies can be safely housed.

“Over the last 24 hours, 13 people have passed away, but that is consistent with the number of ICU patients being treated there,” the Elmhurt hospital staff said in a statement. “Staff are doing everything in our power to save every person who contracts COVID-19, but unfortunately this virus continues to take an especially terrible toll on the elderly and people with preexisting conditions. We need New Yorkers to do their part. Stay home.”

Video recorded at Elmhurst by Dr. Colleen Smith on Mar. 24 showed rows of beds filled with critical COVID-19 patients hooked up to ventilators.

“Leaders in various offices from the president to the head of health and hospitals [are] saying things like we’re going to be fine, everything’s fine,” said Smith in footage she shared with ABC News.

Smith recorded a row of five ventilators not being used at the time, and said that unless people die, “I expect we’ll be back to needing to beg for ventilators again in another day or two.”

But it’s not just Elmhurst — the situation is worsening throughout the city.

“All day while I’m at work, I’m hearing STAT pages overhead for anesthesia and respiratory therapy — which means someone is in respiratory distress and needs to be intubated — all day I hear this,” said Gaither.

Gaither added that space is also becoming an issue.

“At this juncture, it’s impossible to predict what scenario will play out. I can say that the bulk of ICU’s are packed with COVID-19 patients. ICU patients who don’t have the disease are being transferred to other medical sites/hotels. Beds and respirators are direly needed,” she said.

Gaither made a heartfelt plea to everyone who may not consider COVID-19 a significant threat.

“There have been scenes from Italy with people lying dead on the streets. I truly fear that scenario becoming a reality here in NYC, and what happens here is likely a forecast as to what the rest of the United States can expect to encounter.”

With more confirmed COVID-19 cases than anywhere else in the United States, staff and volunteers in New York hospitals are resorting to making their own face masks and fear they’ll soon contract the virus due to lack of following proper protocol.

An assistant nursing manager at Mount Sinai West, 48-year-old Kious Kelly, recently died after testing positive for the new coronavirus about 2 weeks before, according to the New York Post.

Photos posted to social media by the Post show staff at Mount Sinai West resorting to store-bought garbage bags to protect against transmission.

The internal medicine resident based in Queens said he is reusing supplies over multiple days.

“I put a surgical mask overtop the N95 and then discard that. So I try to keep the surface clean,” he said. “I have a plastic eye shield that I wear that I’ve had for a week and I clean it with alcohol after I’ve been in heavy exposure areas,” explained the internal medicine resident.

“The yellow gowns that we wear over our scrubs, those are getting hard to find, because you can’t reuse those. You tear them when you take them off,” he said.

Patients over 50 most affected

According to the anonymous internal medicine resident, COVID-19 affects both genders and all ages, but older people can have worse outcomes.

“The ones above 50, especially the ones with existing problems, most notably things like asthma or autoimmune disease that damage the lungs — they do not do well,” he said.

And it’s not just patients’ lungs that are at risk.

“There are some instances of people who had relatively healthy lungs but heart problems, and they do very poorly,” he emphasized. “The pneumonia gets a lot of attention — but what is becoming more obvious is that this causes heart inflammation. So I’ve seen people who suffer primary cardiac symptoms. These are 60 to 70 plus years old.”

Choosing who will be treated

Triage is the process of deciding which patients should be treated first, based on degree of sickness or severity of injury.

Shortages of critical, life-saving equipment — like ventilators — means NY medical staff may have to make decisions that are potentially life ending for some people.

“During a public health crisis such as the current COVID-19 situation, healthcare systems may become stressed and resources scarce. Physicians and other healthcare professionals may be put in challenging positions to triage treatment,” said Dr. Robert McLean, MACP, president of the American College of Physicians (ACP) in an emailed statement.

McLean added that, if necessary, patients should be transferred to institutions with greater resources and capacity when possible.

“But if such circumstances arrive, the solution is not to discriminate against classes of patients and ask physicians to pit one group against another,” he added.

But increasing numbers of cases could overwhelm the city’s scant resources, forcing health officials to make hard decisions regarding treatment.

“In the last week it’s just like water in a bag and a hole just breaks in the bottom of the bag. They just start pouring in,” the internal medicine resident said. “We don’t have the ability to handle what’s coming to us. I’ve never felt that way.”

Health officials say that COVID-19 is being contracted in nearly one out of every thousand people in New York State, and that this ‘attack rate’ is 5 times higher than experienced in the rest of the United States.

Queens is most affected, but according to healthcare workers, Manhattan and the Bronx are also seeing sharp increases in cases.

Experts say that the crisis in New York could rival severe conditions seen in Italy, and may be something we can expect to happen throughout the country.