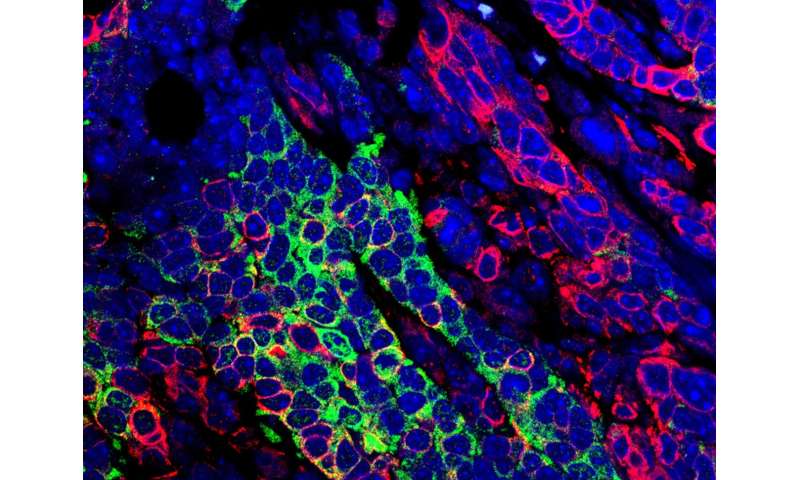 Immunotherapies have revolutionized treatment for people with a variety of cancers. But when given to those with triple-negative breast cancer (TNBC), a particularly aggressive form of the disease, less than 20% respond.

“A big question in the field has been, Why are the rest not responding?” says Rumela Chakrabarti, an assistant professor at Penn’s School of Veterinary Medicine.

In a new paper in Nature Cell Biology, Chakrabarti and colleagues illuminate the molecular details at play. They found a signaling pathway which could be exploited in TNBC patients to better target therapies in the future. Using a mouse model of the disease that mimics key characteristics of human disease, they showed that losing the activity of the protein ELF5 promotes the activity of another protein, interferon-gamma receptor 1. Stabilized Interferon-gamma receptor 1 leads to activated interferon gamma signaling, which in turn leads to increases in tumor aggression and spread, which could be mitigated with therapeutics that block interferon gamma signaling.

“This was an eye-opener,” says Chakrabarti, “because often interferon gamma has a protective effect in cancer and is commonly given as a cancer therapy to some patients. It works well in certain cancer types, but for particular subtypes of triple-negative breast cancer we see that blocking interferon gamma may be the best strategy for patients.”

Chakrabarti had a deep familiarity with the biology of the ELF5 protein. She began studying it more than a decade ago as a postdoctoral researcher at the State University of New York at Buffalo, finding that its normal function supported pregnancy and lactation. More recently, in 2012 she and colleagues published a previous report in Nature Cell Biology showing that ELF5 could suppress a key transition that occurs to enable breast cancers to spread.

That earlier work, however, did not focus on TNBC specifically, in part because scientists had lacked an effective mouse model. Over the course of three years, Chakrabarti’s team developed a preclinical TNBC model that recapitulated two hallmarks of the disease: its propensity to spread and the influx of immune cells that accompanies tumor growth.

In the current study, the researchers found that, when these TNBC mice’s tumors also lost the function of the ELF5 protein, their disease course resembled that of human patient’s even more closely. “Losing ELF5 made the disease very metastatic and very aggressive,” says Chakrabarti.

To elucidate the molecular happenings that resulted in a more dangerous form of TNBC, Chakrabarti and colleagues examined the RNA that was being expressed in tumor cells of the TNBC mice whose tumors lost ELF5 expression. They found increased activity of the interferon-gamma pathway, caused, they believe, by an increase in expression of that protein’s receptor. This loss also led to an accumulation of neutrophils, a type of immune cell, which has immune suppressive function. In contrast, normal mammary cells that retained ELF5 had low levels of interferon gamma signaling.

Blocking this signaling using an antibody against the interferon gamma receptor 1, or by genetically manipulating tumor cells to express lower levels of the receptor caused tumors to grow and spread more slowly.

Finally, to determine whether these findings in a mouse model may be relevant to humans, the research team looked at genetic and protein data from patients to determine their level of ELF5 and interferon gamma receptor expression. Patients with lower ELF5 and higher receptor levels, they observed, fared poorer; their cancers tended to spread sooner around their bodies.

The findings, Chakrabarti says, should be considered carefully by clinicians who are using interferon gamma and immunotherapies to treat cancer patients.

“This is telling us that we need to target patients more selectively when we treat them,” says Chakrabarti. “It could be that if someone has low ELF5, they should be given an interferon-gamma signaling blocking therapy in addition to their immunotherapy.”