When the Sports Illustrated team called Katrina Scott to ask if she could shoot this year’s Swimsuit Issue, she declined.

“It’s early, but I can’t shoot this year, because I’m pregnant,” the fitness personality and entrepreneur told them.

To her surprise, they didn’t even hesitate, assuring her that they would still love to do the photo shoot. “This is a beautiful moment,” Scott, mom to 3-year-old Isabelle and currently expecting her second baby girl any day, recalls them telling her. “Why shouldn’t we still shoot?”

In that moment, Scott accepted — and made history as the first visibly pregnant woman to appear in Sports Illustrated‘s iconic Swimsuit issue. 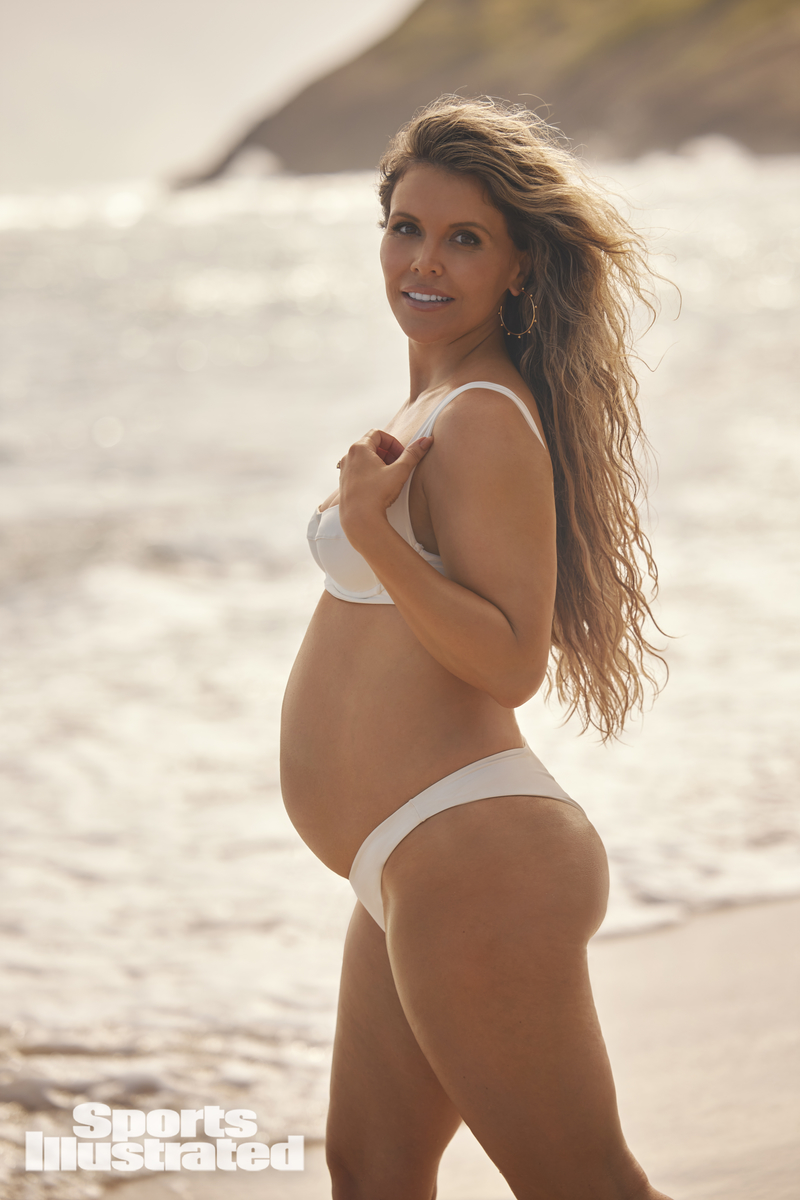 With a team of women at the swimsuit issue’s helm, gone are the narrow and exclusive beauty standards once featured in its pages. In the past few years, the Sports Illustrated Swimsuit Issue has made groundbreaking strides in inclusivity. Last year alone, its three separate covers featured Naomi Osaka as the first Black female athlete, Megan Thee Stallion as the first rapper, and Leyna Bloom as the first transgender cover model. So it should come as no surprise that this year’s issue is celebrating pregnant and postpartum bodies, including Kelly Hughes, the first model featured to have a C-section scar.

“The thing about Sports Illustrated is that they celebrate beauty in all different ways,” Scott told SheKnows. “They have really shifted the narrative of what beauty means to women.”

Model Hunter McGrady, who also posed for this year’s issue, knows a thing or two about being outside the outdated, “traditional” beauty standards; in 2017, the plus-sized model and body image activist was billed as the curviest SI swimsuit model ever. Since then, she has posed for the issue multiple times — but this year felt special to McGrady, because she was barely six months postpartum at the time of the shoot, a prospect she admits felt a little nerve-wracking.

“At first I was like, ‘Oh my gosh, no way, this is too soon, I’m not ready,’” McGrady, mom to 11-month-old Hudson, tells SheKnows. But then, she had an epiphany. “I just did the most spectacular thing of my life,” she said. “My body may not look like it did last year or the year before, but this is the body that I have now, and I have to appreciate that. I have to do things that may scare me a little bit — not only for me, but for other mamas out there, and for my son.” 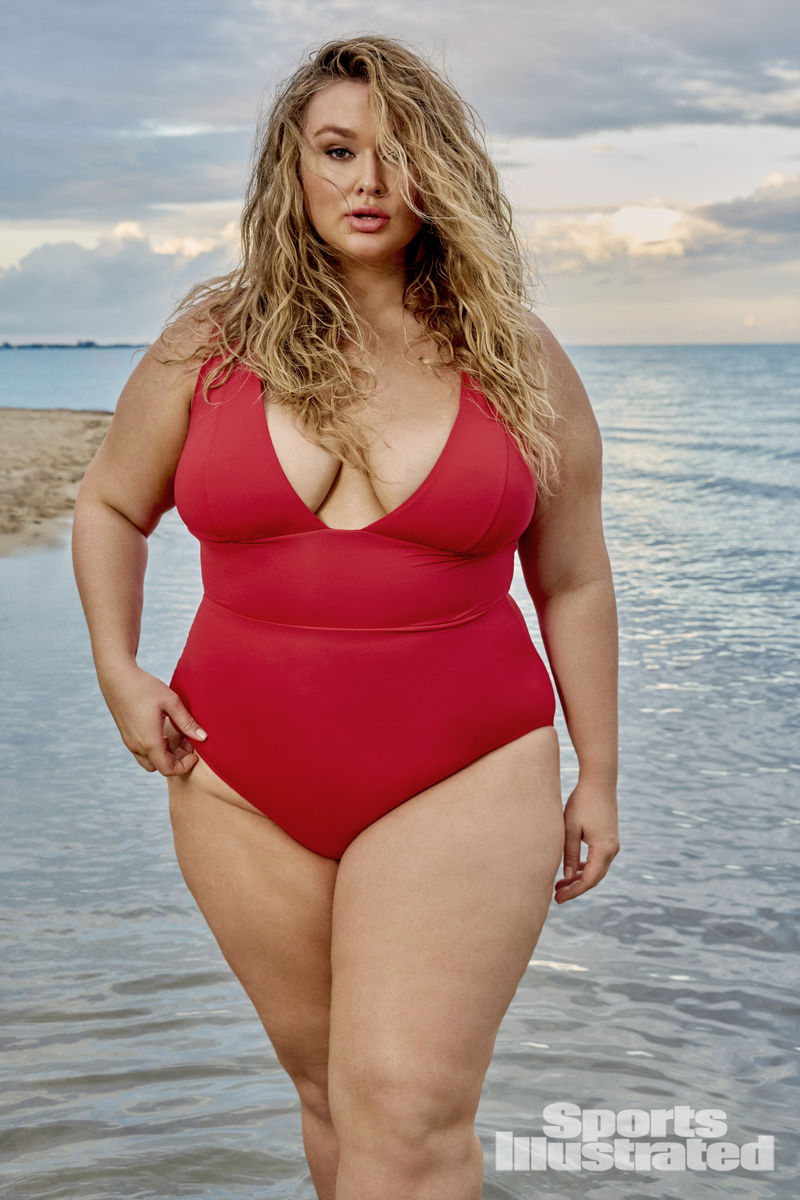 McGrady and Scott are both proud to play a role in Sports Illustrated Swimsuit’s celebration of the body in all its forms, and are both outspoken about the unrealistic (and often unsafe) expectation on women to “bounce back” after pregnancy.

“Coming from the fitness industry, there was a lot of pressure put on me that were meant to sound like compliments: ‘Oh, you’re in fitness, you’ll have a small bump and you’ll bounce back right away.’ And I heard it from everybody,” says Scott.

“Social media throws this ‘bounce back’ culture to us, which is so toxic in so many ways — and we don’t really take time to look at what our bodies have done for us,” McGrady adds. “Your body was the house for the most wonderful thing in your world.” She also urges us to remember to see this toxic culture for what it is: a money-maker, pure and simple. “The more we hate ourselves, the more that we find problems with ourselves, the more that these big conglomerates make money,” she points out.

But if you’re like many women, and struggle with body positivity and acceptance, McGrady would like to remind us that it’s okay to just be neutral. “It’s all about rewiring the way that we think about things and giving ourselves grace and knowing that a bad day is fine and not loving every inch of your body is fine,” she says. “This is my body, it’s okay for what it is right now. I’m going to live in it. I’m going to honor it. I’m going to give myself grace. I’m going to go about my day. And that’s enough. And that’s beautiful.” She wants women to realize that confidence is a journey, not a destination: “It’s such a bumpy, high, low, rocky journey. But there’s no end point. There’s no end point where you just go ‘That’s it, I’m confident.’”

For her part in building body confidence and combating “bounce back” culture, Scott decided to be very open about her postpartum experience with her first daughter. Even as a fitness professional, she didn’t exercise until almost six months postpartum — not six weeks, when she was technically cleared to do so.

“I didn’t have a bounce back, but I don’t think that’s a good narrative for women,” she says. “We shouldn’t bounce back. We have to bounce forward. We have to embrace our new strength, our new body, our new pair of jeans.” And speaking of jeans, Scott actually donated much of her pre-baby clothing: “This is a new body. And this new body deserves new clothes. I’m not going to look at my old clothes and put that kind of pressure on myself.”

For Scott, who has had multiple miscarriages and struggled with secondary infertility, being included in this year’s issue is particularly poignant because it showcases not only her pregnancy, but her “rainbow baby” conceived via IVF. She has been transparent about her fertility journey on her website, Live Beautifully, and it has even inspired her to become an ambassador for the nonprofit Baby Quest Foundation, which provides grants to those seeking fertility help who may not be able to foot the hefty bill alone.

“Part of my privilege is that I have access to this and can pay out of pocket to grow our family; a lot of people don’t have access to that,” Scott tells SheKnows. “And so I did a lot of research around organizations that provide funds and grants for both families and individuals, which is amazing. A lot of insurance only covers couples, not individuals. Baby Quest does grants for couples, same-sex couples, individuals, secondary infertility, and helps them cover the cost.”

To both McGrady and Scott, being part of the 2022 Sports Illustrated Swimsuit Issue was an honor they were excited to take part in — not only for themselves, but for other moms who need to feel seen and know that it’s okay to be comfortable in their own skin.

“I just get more and more messages from women just being like, you know, ‘Thanks for doing what you do and for making me feel seen and valued and heard,’” says McGrady.

“This moment in history, which I’m honored to be part of, is just the beginning. Being able to create life is a miracle, and that should be celebrated and represented in such an iconic publication,” Scott says. “I hope to represent the women who feel like it’s too late for them. I’m 38, and I would’ve loved to have been in Sports Illustrated in my 20s, but it’s even cooler now.”

These celebrity moms have embraced the changes in their bodies after giving birth.