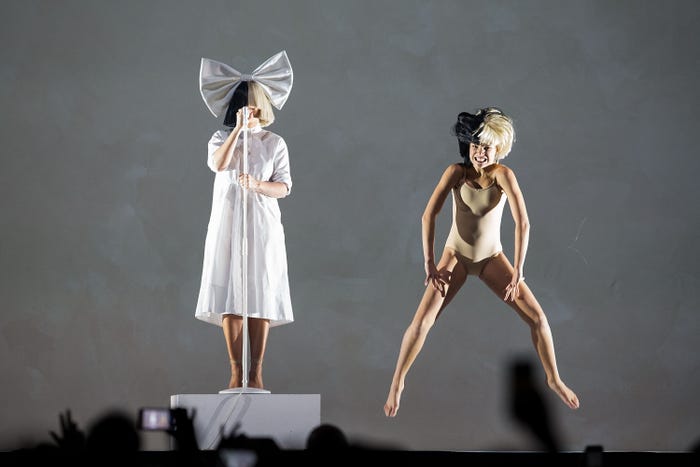 For three years, Australian musician Sia was so depressed she barely left her bed, projecting movies onto her ceiling for 16 hours a day, she told author and entrepreneur Tim Ferriss in an August podcast.

But with intensive treatment for complex post-traumatic stress disorder, the "Chandelier" singer-songwriter, who famously keeps her face publicly concealed under a black-and-white wig, said she's in a much better place today.

She credits embracing attachment theory, a psychological framework that emphasizes the importance of relationships between kids and their caretakers, with much of her current mental health.

She said it's taught her that adulthood issues — ranging from neediness in relationships to addictions — is caused by how people are treated by their parents in the first 10 months of life.

But Regine Galanti, a Long Island child and adult therapist, told Insider that Sia's take misinterprets what attachment theory is, and places far too much blame on new parents. "Hearing that would create a lot of stress and guilt in a way that's harmful to [parents] and their baby," Galanti said.

In the podcast, Sia said people have one of five attachment styles: dismissive, preoccupied, disorganized, unresolved, and secure, "which no one in Hollywood is," she laughed.

She said before treatment, she was "complexly disorganized" and only had one of the seven traits that comprise a secure attachment style, the type that helps you form the healthiest relationships.

That's traced back to her life as an infant, she said. "In the first 10 months of your life, you are basically told who you are and what to experience in the world and how to behave and how to respond in any situation," she said.

But working with meditation guru George Haas, whose work draws on attachment theory, has helped her develop five of the seven traits. "I'm not afraid anymore," she told Ferriss. "I spent my whole entire life extremely afraid, especially in interpersonal relationships."

Like any theory, psychologists have varying interpretations of attachment theory, which originated in 1958 by psychoanalyst John Bolby, who showed in experiments that children tend to react in one of three ways when separated from, and then reuinted with, their parents.

Those who are upset when the parents leave but easily comforted when they return are securely attached.

Modern psychologists understand that feeling loved and safe in early childhood is critical for a child's well-being and development, but the research on how much an early attachment style influences life and relationships is "really fuzzy," Galanti, who serves on the board of the American Psychological Association's Society of Clinical Child and Adolescent Psychology, said.

"We know child attachment is a thing, we know children experience these patterns," she said, "but it wouldn't make sense to extend this forever."

According to Sia's interpretation of attachment theory, sleep-training babies, including letting them "cry it out" rather than comforting them, creates permanent harm.

"People who sleep train their babies, who think that it works, yeah it works because your baby thinks it's going to die and it gives up on life and stops crying," she said.

That haunts them in adulthood, according to Sia (who has no health credentials), manifesting as extreme neediness or obsession in relationships, for example.

"When you text [a love interest] and they don't text you back, you start to feel sick and panicky," she said. "All the same neurochemicals that were dumped into your body when you were a baby and you thought, 'I'm going to die because nobody is coming,' that happens as an adult."

Sia also said sleep-training breeds addicts. "If you leave a baby to 'just 'cry it out,'" she added, "you're damaging them forever and forever and actually you're creating an addict not knowing it."

Relationship problems and addictions are caused by complex and interacting factors

In reality, relationship problems and addictions are complex and caused by many interacting factors throughout life. Pinning them all on whether your parents comforted you at night as an infant has no evidence base, Galanti said.

Plus, it places a far outsized importance on a tiny fraction of your life. What about the parent-child relationship during the day and from age 10 months into to young adulthood? "People are constantly changing," Galanti said, "and there's a lot you can do" to support healthy development and repair mistakes.

There's nothing wrong with sleep training, either, she said. For many families, letting kids cry at night rather than constantly reassuring them lets the parents sleep, allowing them to parent better by day. "A sleep-deprived parent needs to now bond with their child, but they don't have the resources," she said. "There's a balance here."

Finally, adults who attribute all their problems to how they were raised can prevent them from making positive chances, Galanti said. "At a certain time, you have to take ownership and say, 'I'm not the baby anymore' and I'm going to have to work hard to make the changes I need."