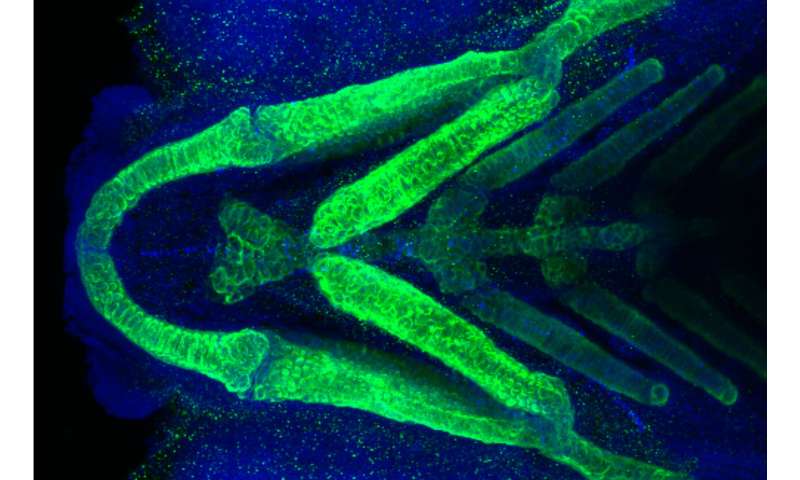 Virginia Tech scientists with the Fralin Biomedical Research Institute at VTC have manipulated genes to link an undiagnosed human disease with a rare mutation in the PHETA1 gene.

Using CRISPR genome editing and other research tools in zebrafish, the scientists found that zebrafish PHETA1-like proteins are necessary for renal function and craniofacial development in zebrafish—consistent with kidney and craniofacial problems observed in the human patient. The study was published in the current issue of Disease Models and Mechanisms.

The research began after a study of a 6-year-old girl identified through the National Institutes of Health (NIH) Undiagnosed Diseases Program, which focuses on the most puzzling medical cases referred to the NIH Clinical Center in Bethesda, Maryland.

“When a family takes a child to a family physician and a specialist, and no one can figure what is causing the health problem, it creates a real burden,” said Albert Pan, an associate professor at the Fralin Biomedical Research Institute, who led an international team of investigators in the study. “We focused on this disease because it is hard to manage and difficult to treat because its underlying cause is unknown.”

In collaboration with the NIH team—along with an assembly of researchers from national and international institutions—Pan investigated how patient-associated mutations may contribute to the clinical phenotypes; in other words, the physical properties and appearance.

The patient, who had developmental delays and facial and renal abnormalities, had a mutated version of the PHETA1 protein. Researchers generated similarly mutated or deficient versions of the PHETA1-like proteins in zebrafish to find that they were interacting in a harmful way with OCRL, the causative protein for Lowe syndrome.

A broad range of research groups collaborated during the study on matters of genome analysis, protein modeling, craniofacial development, and undiagnosed diseases.