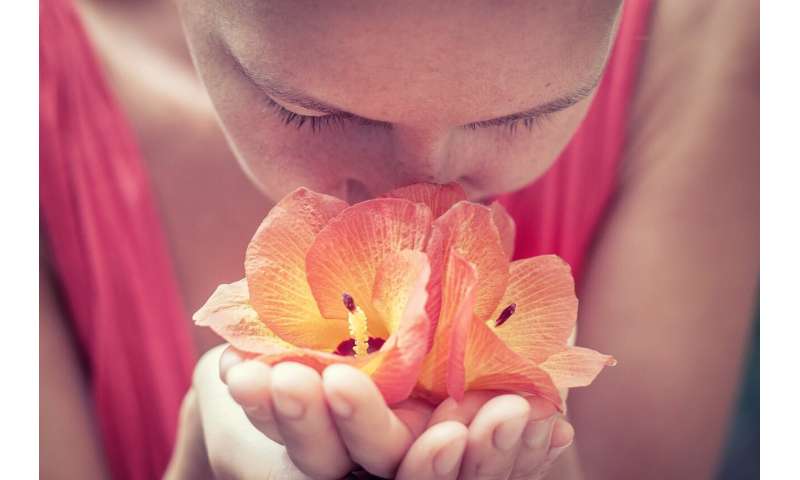 Many of us have encountered new pandemic-related checkpoints as we’ve tried to enter a workplace or medical office. There’s no entry until we pass temperature checks and answer questions about whether we’ve traveled lately or been around anyone with COVID-19.

While probably not completely worthless, these procedures are inherently flawed. Most people with coronavirus never get a fever, and it is often not one of the earliest symptoms. The virus is everywhere, and many people don’t know whether they’ve been exposed.

Nancy Rawson, a biologist who is associate director and vice president of the Monell Chemical Senses Center, thinks there could be a better way to flag people who need coronavirus tests: measuring how well they can smell.

A new analysis of coronavirus studies that involved Monell found that 77% of coronavirus patients had complete or partial loss of smell when tested. Forty-four percent were aware of the symptom without testing. Loss of sense of smell (along with sore throat) is also one of the earliest symptoms, making it more useful than later symptoms for protecting others from exposure, Rawson said.

“It is one of the earliest symptoms, and it is certainly earlier than fever,” she said. “Smell loss alone predicts diagnosis better than a fever.” Taste loss can occur as well, but it is less common and often related to smell loss.

Rawson’s interest in what coronavirus does to the sense of smell—aka olfaction—goes well beyond its potential for screening. The pandemic, she said, could leave up to 750,000 Americans unable to smell, and that has major implications for their safety and quality of life.

She has been testing her own sense of smell each evening this month. She’s participating in a pilot study of a new screening system that she hopes will lead to a large clinical trial. But the tests also ease her mind about allergy symptoms. She said a number of studies evaluating smell tests for coronavirus screening are in the works.

The trial Monell hopes will receive funding involves a smell test it developed called Scentinel. The Philadelphia nonprofit partnered with Scentisphere to create the test, which contains three peel-and-sniff films. Two have no scent. The third contains a rotating group of familiar odors like coffee, chocolate, popcorn, and natural gas. People who take the tests are asked to say which strip (if any) has a scent, rate its intensity, and identify the odor.

Rawson imagines a day when a large employer could add smell tests to its screening. She thinks the tests would cost about a dollar each. Monell wants to charge the minimum amount to cover expenses, Rawson said. People with impaired olfaction would be referred for more expensive coronavirus tests.

Rawson said the mask problem could be solved by quickly lifting the bottom of your mask to smell a strip or asking employees to take the test at home before work.

For those of you who just want to combat anxiety at home, Rawson says plenty of readily available products will do. Try smelling coffee, perfume, minty toothpaste, basil, rosemary, roses.

Sense of smell can also be impaired in people with Parkinson’s and Alzheimer’s diseases, so tests could alert doctors to serious neurodegeneration. Flu can also cause smell loss, but not as often as COVID-19. About 60% of flu patients eventually get their sense of smell back. Rawson expects a similar recovery rate for coronavirus patients. Permanent impairment is more likely in older people.

While olfaction loss in flu patients seems to be related to inflammation, Rawson said COVID-19 appears to bind directly with ACE2 receptors on “supporting” cells in the nose that help other cells that actually detect odors. It is too soon to know how that will influence recovery.

Smell may not seem like your most important sense, but Rawson said that losing it can have serious consequences. She has been so impressed by patient stories that she is advising a new group called the Smell and Taste Association of North America. She also experienced smell loss herself in March 2019. She first noticed it when a sip of wine tasted like vinegar during a “devastating” visit to the flower show. “Every once in a while (I) would get just a little whiff that gave me hope I might recover,” she said. She did, after about two months.

A new study from JAMA Otolaryngology found that people aged 65 and up with impaired sense of smell were more likely than peers to die within five years. The authors said that might be because olfactory dysfunction is a sign of more widespread damage, of inflammation or of “advanced physiological aging.” Depression, malnutrition, and poor food choices could also be factors.

Rawson said that losing your sense of smell takes much of the pleasure out of eating. “Most of flavor is smell,” she said. Try eating jelly beans with your eyes closed. Hold your nose and put one in your mouth. Then inhale and swallow. “It’s a completely different experience,” she said. “Without your nose, jelly beans are basically just sweet or sour.”

That lack of enjoyment can lead to poor nutrition, but smell loss also makes people less likely to notice when milk or other foods good bad. They also can’t smell when something is burning on the stove or natural gas is leaking.

A surprising finding is that people who’ve lost their sense of smell say they feel more disconnected from others. “We feel there’s a component of chemical communication between humans that is below the level of consciousness,” Rawson said. Scents are also a strong cue for emotional memories.

Rawson said there is no medical treatment that would protect the sense of smell during coronavirus infection. However, people can often regain sense of smell with a process called “smell training.” It involves smelling a set of odors and thinking about what they are every day.

She said a form of vitamin A called retinoic acid is being tested. It has to be applied by a doctor.