After months of training and qualifying competitions, U.S. fencer Race Imboden was on track to compete for his country at the 2020 Olympic Games in Tokyo. But like everyone, his plans were thrown into limbo with the outbreak of the COVID-19 coronavirus, and now the 26-year-old athlete and two-time Olympian has no idea what the future holds. He and his teammates can’t get back to Italy, where they usually train; their gyms in California have closed; the remaining Olympic qualifying events have been postponed; and it remains to be seen whether the Games themselves will be cancelled, pushed back, or held as planned.

On a phone call from Palm Springs, CA—shortly after learning his L.A. training facility has closed to prevent transmission of the virus—Imboden told Men’s Health about the uncertainty he and other Olympic hopefuls are experiencing during the pandemic. His story has been edited and condensed for clarity.

Last weekend, we all flew back to California—all the fencers in the world. A good thousand people, plus the people around them, like coaches. We had our last Olympic qualifying competition … and it’s cancelled.

Our team is pretty much locked down—we know the guys going. But the problem is, there are a lot of countries [whose teams] come out of this competition, and you’re now in limbo.

It’s a really crazy time in all sports. We’re talking to friends who flew to San Diego to be in BMX: cancelled. Ice skating: cancelled. All my friends were in same position: a deadly limbo, which is the worst place to be in sports. We work off motivation, and right now the motivation for everyone is the Olympic Games. Now we’re three months out, and people are really trying to make the best of the last steps of preparation, and it’s completely ground to a halt. They just closed fencing clubs and gyms in L.A. We don’t even have a place to train now.

We were still going to the gym until [March 15], knowing it was risky. We were cleaning equipment, washing our hands, not touching our faces while we were lifting—just kind of dealing with the fact that we don’t know if there’s going to be a competition in one month, two months—we can’t get out of shape now.

In the news, we keep seeing that [the Olympics] will happen, but I’m becoming more and more scared it just won’t. There’s too much to do. There are so many events that have to happen for people to qualify. It seems like we’re going into, what? A month of lockdown in the U.S.? That will leave us two months before the Olympics are supposed to start, and that’s not giving us much time to jump back on horse.

“We were doing fine-tuning prep work—there was no reason to do it anymore.”

[As the virus spread], we kept our heads in the game, and we were training a lot—and then we heard about the cases with the NBA. I turned to my girlfriend [French fencer Ysaora Thibus] and said to her, ‘There’s no way we compete in three days.’

I was in the gym the first time I heard [the next qualifier was postponed.] I was in the middle of my workout. I had weight belts on, doing jumps and reactivity work. Someone came over and whispered something to my trainer, and I said, ‘What is it?’

He said, ‘You can take your belt off. We can stop. There’s no competition.’

We stopped mid-workout. We were doing fine-tuning prep work—there was no reason to do it anymore. 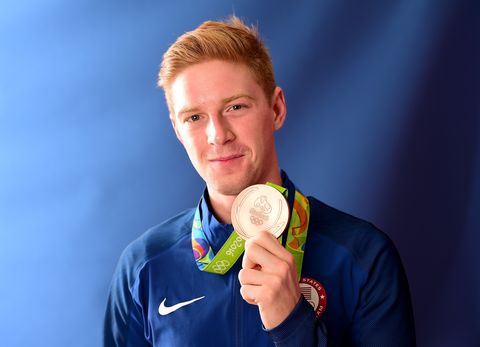 Imbdoen with his bronze medal after the 2016 Olympic Games.
Harry HowGetty Images

[On Instagram,] every athlete is posting their workouts from home. That’s kind of the trend. I think it’s gonna start hitting athletes hard. We wake up every morning, and we have no idea what to do. Where to go. How to train. What’s going to happen. Are we even going to be competing in [Tokyo]? It went from an absolute definitive—we definitely are qualified—to just being all question marks. We have no idea if our coach [Stefano Cerioni, who is Italian] is going to have to go home.

We definitely know we have to stay in shape and continue to train, but it’s becoming more difficult. We’re a combat sport, and we need multiple sparring partners. We’re all about groups; we’re standing in front of another man in order to train. It’s not an easy one to go out, run fast, swim—it’s very specific training.

“That light at the end of the tunnel seems to be fading.”

[Fencing] is our livelihood. It’s how we make money. And everything is on pause right now. April is usually a time when we’re locked in [for the Olympics]: we can do press; we can make announcements; we can lock in sponsorships. Everything’s paused. Sponsors for the Olympic Games—that’s where we make all our money. It’s how we get our press and get seen. [April] was when we were supposed to come together as a team and celebrate.

Sports are always something that are an addition to your life. Sports are supposed to bring pleasure, so when life is going wrong, it’s not the right time, anyway. We have to take care of each other.

As an athlete, I have to think [the Olympics are] going to happen. I continue to work the best I can.

At the beginning, I was firmly [thinking], there’s no way … I believed they would have this under control, and it’s turning into something I believe no one has control over.

That light at the end of the tunnel seems to be fading at the moment.