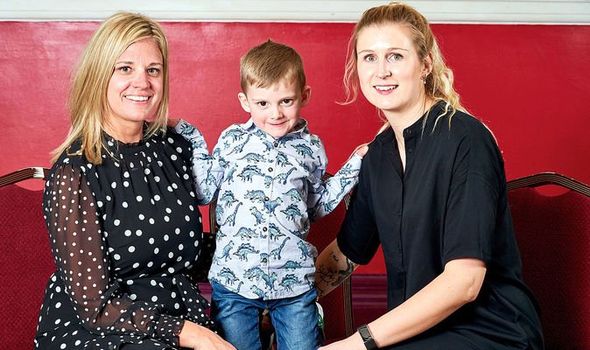 Alfie Commons and mum Lorna, 40, met Christin Bouvier, 34, for the first time on Wednesday after spending more than two years communicating via anonymous letters due to donation laws.

Alfie, from Toton, Notts, was diagnosed with acute lymphoblastic leukaemia (ALL) at seven months after he had a cold for six weeks.

After chemotherapy failed, Alfie was put on a trial immunotherapy drug which helped him to recover to be eligible for a stem cell transplant.

Unable to find a family match, his family found Christin on a worldwide register operated by blood cancer charity DKMS. She donated her cells in a one-hour op and they were flown to the UK and slowly passed into Alfie’s body in August 2016.

When the teacher, from Schwerin, Germany, was finally allowed to meet the family at Chiswick Town Hall in west London, the little boy gave a gift of Lacoste Pink perfume.

Mum-of-two Lorna, who works in HR, said: “The meet-up was just amazing, it was everything we could have possibly dreamed of – there were lots of hugs and tears.

“It didn’t feel like I was meeting her for the first time because we’d been chatting for so long before.

“As a family, we owe so much to Christin, words of thanks will never feel enough.” 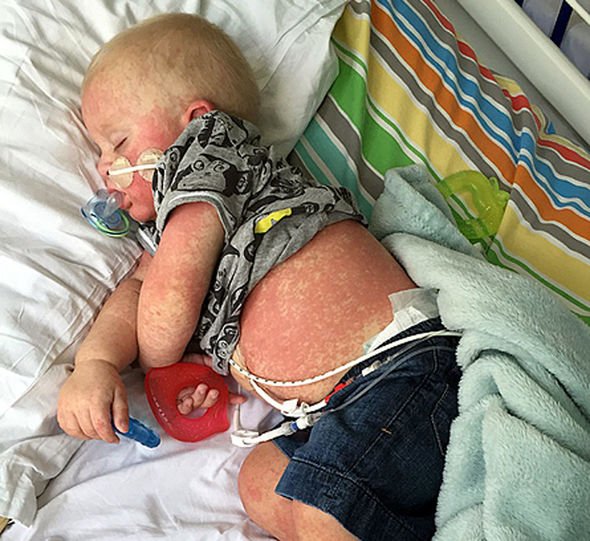 Christin “just cried” when she heard the recipient was a baby. She said: “After I donated my bone marrow and the anaesthetic wore off, I called DKMS.

“They told me that Alfie was a small baby and living in the UK but couldn’t tell me any more due to the laws. When I found out Alfie was responding to treatment, so many tears of joy ran down my face. I still can’t describe that moment.

“It’s a moment that is always with me. Whenever I feel a bit down, I think back to it as it always brings me so much happiness!” She added that the meeting was “so amazing. I was very nervous and shaking at first and when we finally met we cried a lot and hugged.

“Alfie was shy at first but after a bit of time he became more comfortable and we played with some balloons and had a slice of cake.”

After the transplant, Alfie developed a deadly immune condition, but this was controlled by medication. He was given the cancer all-clear in 2017 and has started school.

Lorna added: “I just want more people to sign up to become donors – there’s a match for everyone.”