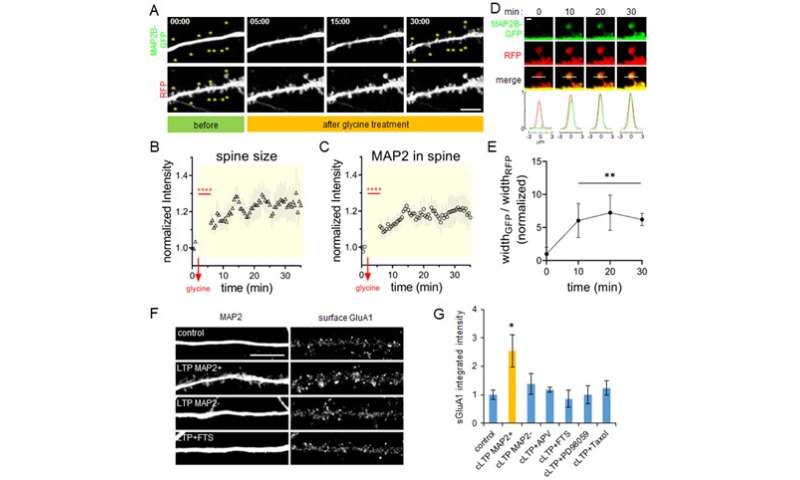 Korea Brain Research Institute (KBRI, headed by Suh Pan-Ghill) announced on the 6th of April, 2020 that the KBRI research team led by Dr. Kea Joo Lee (Collaboration with Dr. Daniel Pak at Georgetown University) presented their discoveries regarding a novel function for MAP2 in synaptic strengthening. The results of this study were published in the online version (Early View) of FASEB Journal.

Neurons in the brain communicate with each other via the synapses. Long lasting changes in synaptic structure and function occur when we learn new things or memorize new information (synaptic plasticity).

Long-term potentiation (LTP) is the best-studied cellular mechanism of synaptic plasticity that underlies learning and memory, and refers to a persistent strengthening of synapses upon repeated stimulations. However, many of the molecules that mediate synaptic remodeling and trafficking during LTP remain to be discovered.

The research team headed by Dr. Kea Joo Lee revealed that MAP2 plays an essential role in induction of long-term potentiation in the mature neurons. MAP2 (microtubule-associated protein 2) is a cytoskeletal protein, which is enriched in the neuronal dendritic shafts, and is known to be important for dendritic outgrowth during development. 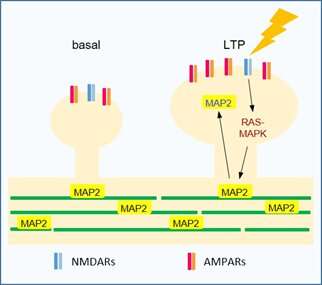 The research team demonstrated that LTP induction is abolished when MAP2 is deficient in the mouse hippocampus and primary cultured neurons through systematic neurobiological approaches, including confocal microscopy, electrophysiology, and molecular cell biology.

Through real-time live-cell imaging and electron microscopy, the research team discovered that MAP2 proteins, present on the dendritic shafts of the neurons, rapidly move to the synapses when long-term potentiation is induced. They also showed that the dynamic MAP2 translocation to synapses is tightly coupled with LTP-induced expansion of dendritic spines and surface delivery of AMPA receptors, which are critical for activating the synapses.

This study is significant because it sheds light on the possibility of MAP2, which was previously known as a dendrite-labeling protein, being involved in the formation of memories by participating in the process of synaptic potentiation.

In addition, it has been evaluated to be a step forward towards the resolution of the longstanding question of “how memories are formed and maintained,” thus providing basic information that could potentially be applied to design the treatment strategies for the memory-related diseases.