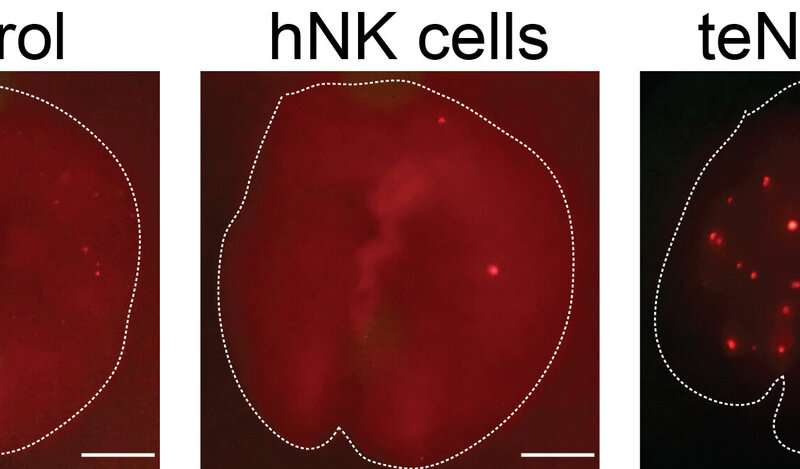 Researchers at Johns Hopkins University School of Medicine have discovered that breast cancer cells can alter the function of immune cells known as Natural killer (NK) cells so that instead of killing the cancer cells, they facilitate their spread to other parts of the body. The study, which will be published July 9 in the Journal of Cell Biology (JCB), suggests that preventing this reprogramming might stop breast cancer from metastasizing to other tissues, a major cause of death in breast cancer patients.

Breast cancer cells spread to other parts of the body by invading the surrounding, healthy breast tissue until they reach the circulation, which can carry them to other tissues where they can form new metastatic tumors. NK cells are white blood cells that can recognize and kill cancer cells as they spread through the body.

“Breast cancer cells must overcome NK cell surveillance in order to form distant metastases,” says Andrew Ewald, a professor of cell biology at Johns Hopkins University School of Medicine and co-director of the Cancer Invasion and Metastasis Program in the Sidney Kimmel Comprehensive Cancer Center. “However, we do not fully understand how breast cancer cells escape NK cell-mediated immunosurveillance during their transit through the circulation and the initial seeding of distant organs.”

Although metastasizing breast cancer cells are initially vulnerable to NK cells, they are quickly able to alter the behavior of their would-be killers, reprogramming them so that they actually promote the later stages of metastasis, Ewald and colleagues discovered. Using several new assays to model metastasis in the laboratory as well as experiments in mice, the researchers found that, after they encounter tumor cells, human and mouse NK cells lose the ability to restrict tumor invasion and instead help cancer cells form new tumors.

The researchers found that combining decitabine or azacitidine treatment with anti-TIGIT or anti-KLRG1 antibodies was particularly effective at preventing NK cells from enhancing the metastatic potential of breast cancer cells.