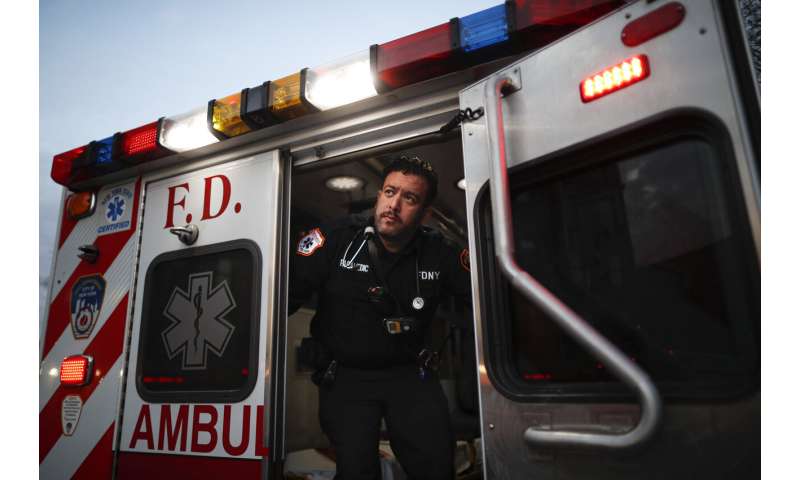 The new coronavirus doesn’t care about a blue uniform or a shiny badge. Police, firefighters, paramedics and corrections officers are just a 911 call away from contracting COVID-19 and spreading it.

With N95 masks hanging off their duty belts and disposable blue gloves stuffed in their back pockets, they respond to radio calls, make arrests and manage prisoners. But their training never covered something quite like this—what has been called an “invisible bullet.”

They go with a lingering cough and lost weight. They toss and turn at night, wondering if the claims of immunity are true. They fear that picking up extra overtime shifts may expose them, and their families, to additional risks.

And then they pull on their uniforms and go back to work.

Some of their stories:

On the beat in northwest Houston, Washington, 28, has been in fights and drawn her gun. In 2017, three months after she finished the police academy, her partner at the time was shot in the leg. 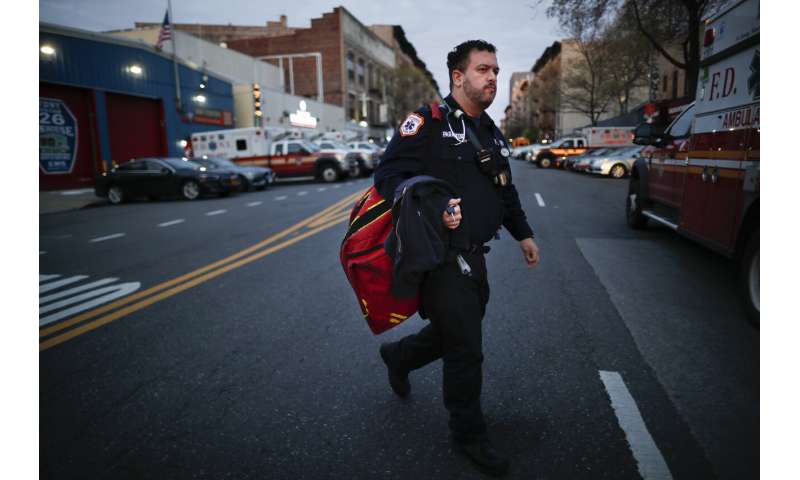 But last month, she was following up on a robbery call when it suddenly felt like someone was sitting on her chest. By the time she navigated her cruiser to her sister’s apartment, she could barely keep her hands on the wheel. She had no idea what was wrong.

Certainty came a few days later after a nasal swab that felt like it poked her brain. On March 25, Washington tested positive—one of the first of about 180 Harris County Sheriff’s Office employees to be sickened.

In lonely isolation, her temperature spiked. Her stomach roiled. She lost her sense of taste and could barely rise from bed for days.

When she finally healed, she worried about getting sick again—about whether her colleagues would want her back.

She returned to patrol this month and found the situation suddenly reversed. Her colleagues gave her hugs. “People feel like, ‘Hey, you have the antibodies. You’re the cure,'” she said. 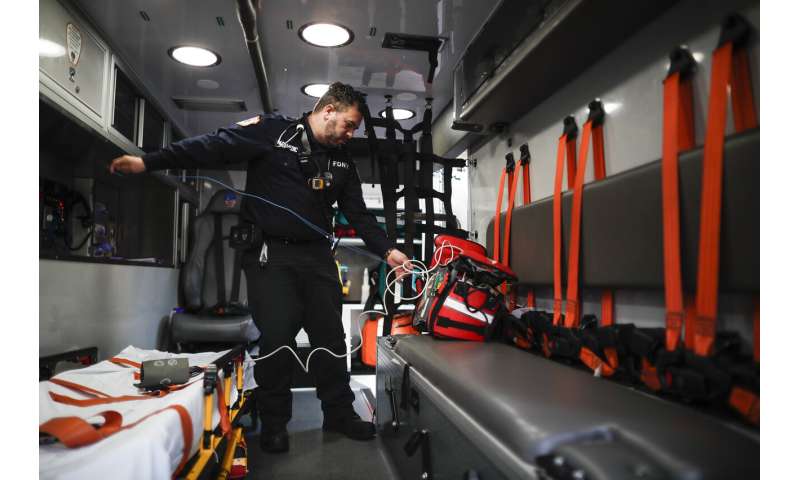 Back on patrol, Washington has the familiar weight on her hips of a Taser, handcuffs and gun. But her safety also depends on gloves and a mask.

“It’s like you’re risking your life even more now.”

NEW YORK—Paramedic Alex Tull of the New York Fire Department feels out of breath after walking up a few flights of stairs and has a cough that just won’t quit. After some recent chest pains, an X-ray showed lingering inflammation in his lungs.

As he goes about his days treating coronavirus patients in the Bronx, he thinks about his own battle with the disease and his rush to return to duty late last month before he was fully healed.

At the height, about a quarter of the city’s 4,300 EMS workers were out sick. Nearly 700 fire department employees have tested positive for the coronavirus and eight have died, including three EMS workers. 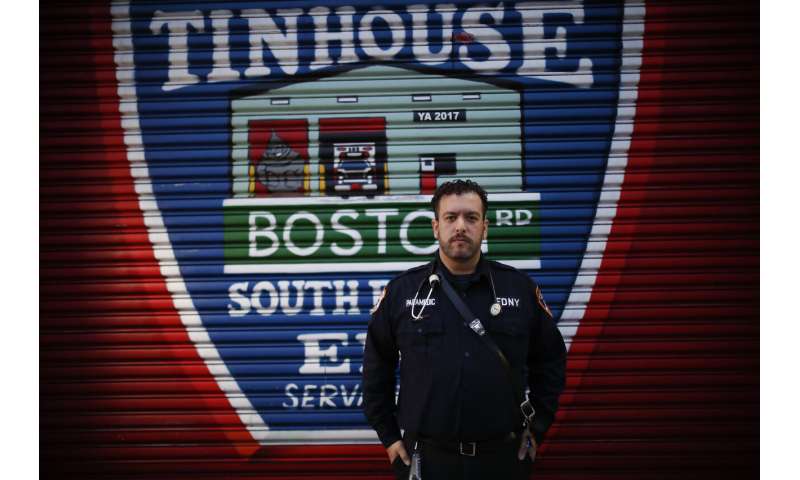 Tull, 38, says he felt guilty convalescing at home for two weeks, flipping through Netflix and Hulu between naps as his colleagues risked their lives. He wondered: “Why did this have to happen to me? I want to be out there. I want to get out there and help.”

But it wasn’t just a matter of loyalty for the 10-year fire department veteran. A policy put in place as the virus ravaged the ranks mandated that personnel who no longer showed symptoms return to work as soon as possible.

“I definitely went back to work earlier than maybe I should have,” Tull said.

Without definitive proof that he’s immune from spreading or contracting the disease, Tull fears his nagging cough might infect his partner or their patients. And with little more than a face mask and gloves for protection, he worries he’ll come down with the virus again. 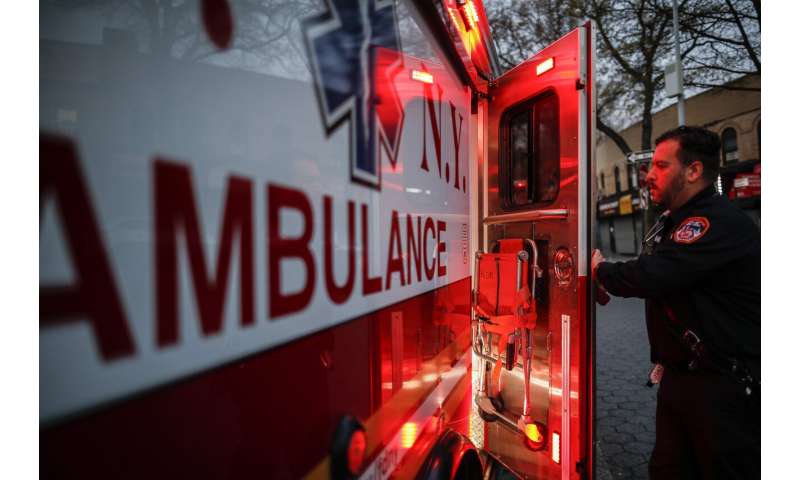 “Is my body ready for round two? I don’t know. It is scary,” Tull said.

AURORA, Ill.—Chief Kristen Ziman spent hours in a cramped conference room strategizing on ways to keep her 306 police officers safe from the coronavirus.

Digital roll calls, solo squad cars, detectives running cases remotely—anything to keep them out of headquarters and away from each other.

Turns out, they needed to stay away from the chief.

Ziman, a patrol commander, her wife—a detective on the force—and Aurora’s mayor all contracted COVID-19 around the same time. They most likely passed the virus during those planning meetings.

The rank-and-file, however, is fine.

“If we had to be the sacrificial lambs,” Ziman said, “putting these plans in place to keep our officers safe, then I will gladly take it any day.” 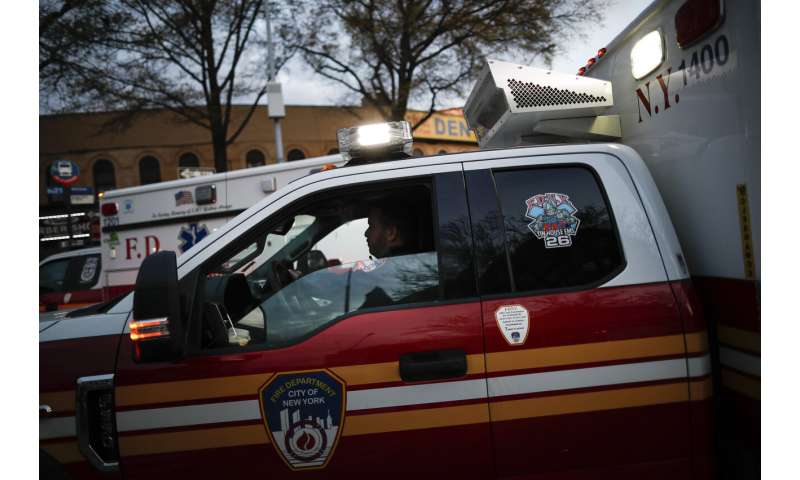 The chief recorded videos from her home, sending them to the officers as part of routine operations plans. She wanted them to comprehend the pandemic’s reality on the streets of Illinois’ second-largest city.

The officers responded with text messages of well-wishes, and a new nickname for the station’s third floor—the home of her office and the infamous conference room—that makes Ziman laugh even through all this.

They’re calling it “The Hotbox”—and avoiding it altogether.

NEW YORK—Sgt. Cary Oliva was frustrated watching the news of his coronavirus-stricken city from his sick bed. The 31-year-old New York Police Department officer longed to be back at work helping with what was fast becoming one of the deadliest disasters in its history. 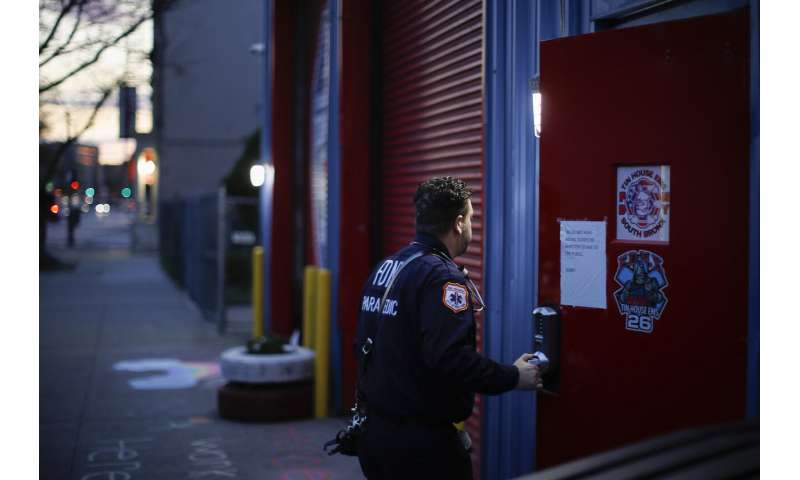 “I felt like I was on the sidelines,” he said. “I was pretty eager to come back as soon as possible, as long as it was safe.”

In all, more than 4,600 employees at the nation’s largest police department have tested positive for the coronavirus. Nearly 2,900 have recovered and returned to full duty. At least three dozen died.

Oliva went back April 6 and immersed himself in a new police mission: educating the public about social distancing measures that experts say are vital to reducing the spread of infection. Protective mask on his face and hand sanitizer nearby, Oliva spends his afternoons cruising by takeout restaurants and other businesses looking for gaps in social distancing protocols.

“I dove right back into it,” he said.

For correction officers, it means any duty that requires working directly with inmates. Custody assistant Sonia Munoz’s line is a 184-bed inmate hospital ward at the Twin Towers jail, with its beige walls and powder blue doors. It’s where she most likely contracted the coronavirus. And passed it along to her younger sister and her father. 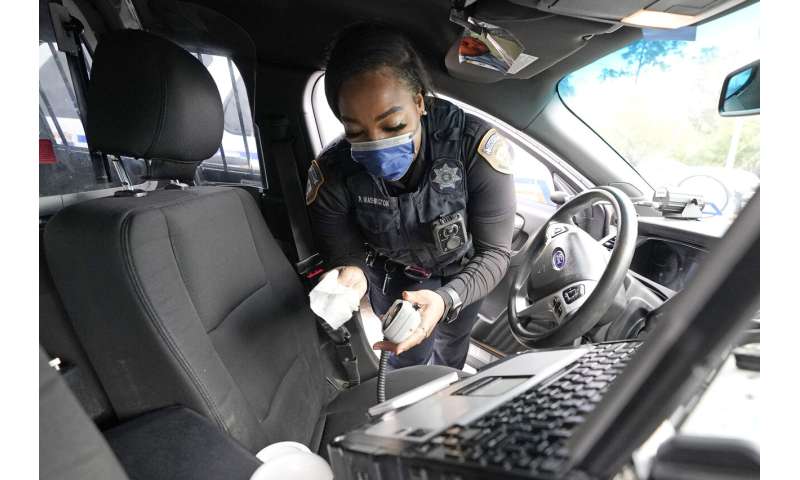 Right now, Munoz, 38, is safe. She’s 10 pounds lighter, her thick uniform belt is tightened to the last notch, but she’s been transferred to an office gig, where she can line up three bottles of hand sanitizer on her desk and work alone.

Still, the line is there.

Any overtime shift could bring Munoz back. Her mother, 3-year-old nephew and 94-year-old grandmother escaped illness last time, but they may not be so lucky again.

It’s something her 27-year-old partner, Christopher Lumpkin, worries about.

On March 18, he became the first member of the Los Angeles County Sheriff’s Department, which oversees the nation’s largest jail system, to test positive for COVID-19. He likely passed it to Munoz and three other custody assistants. More than 60 sheriff’s personnel county-wide and at least 28 inmates have tested positive for the virus. 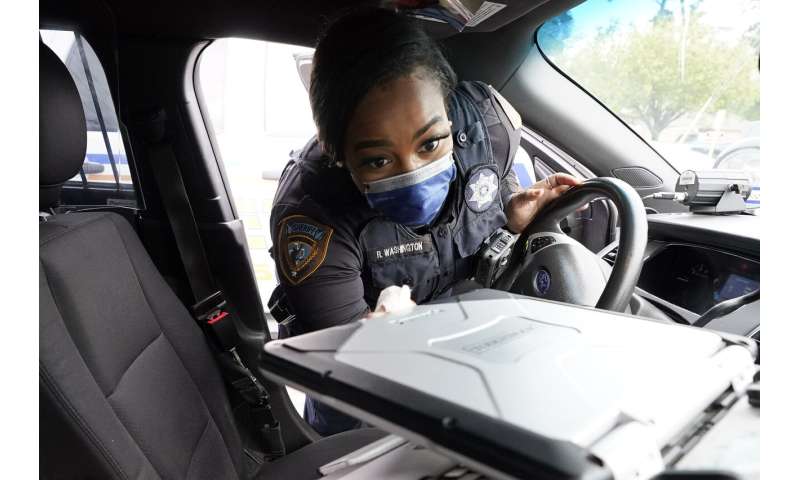 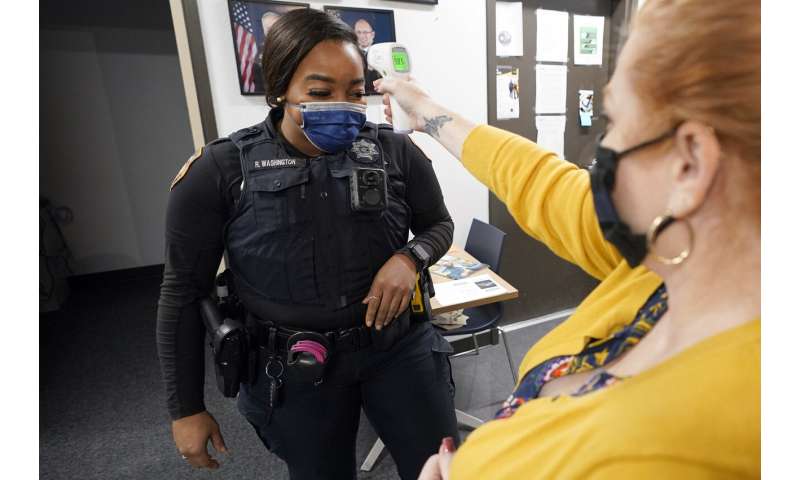 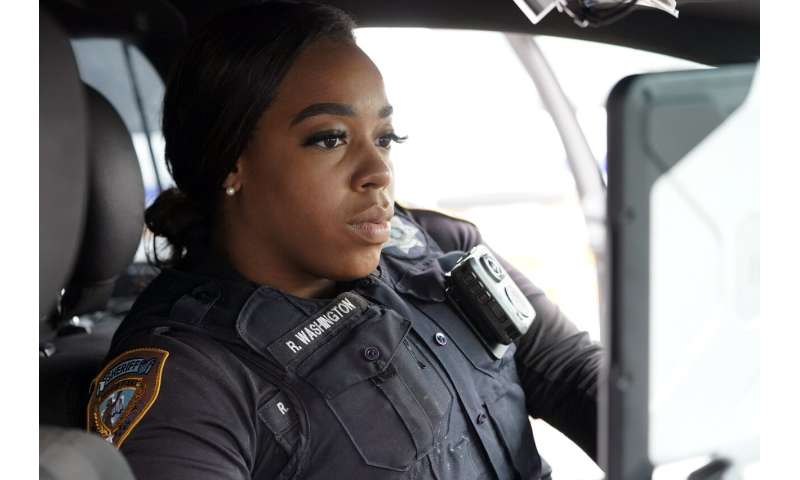 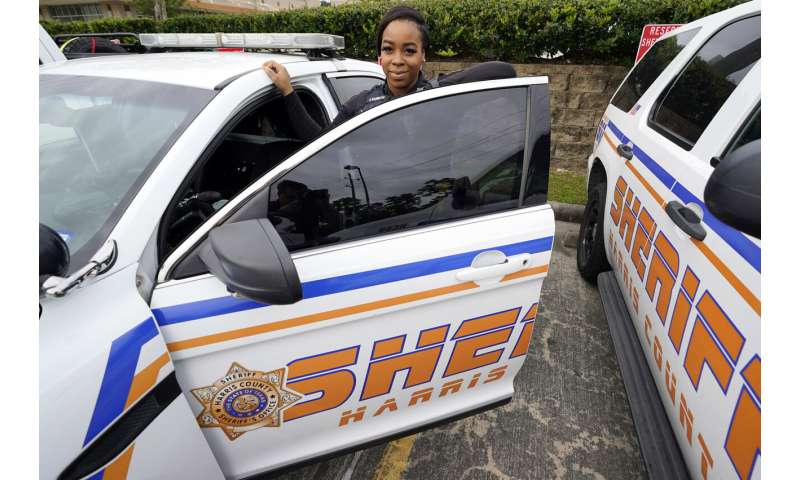 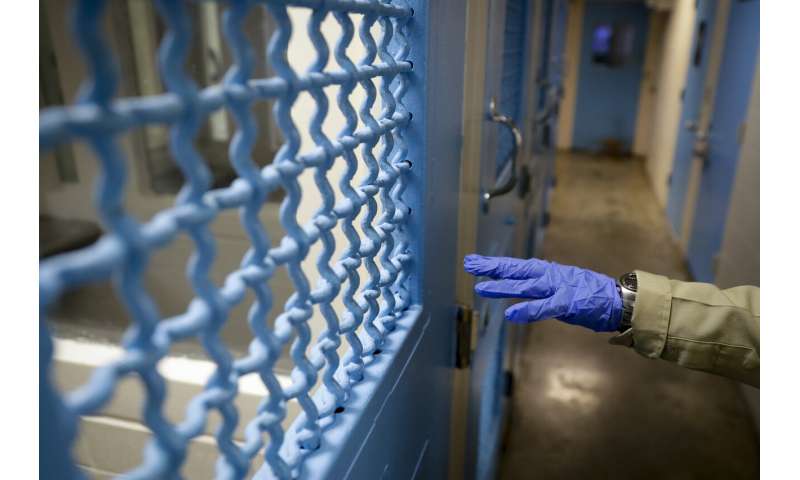 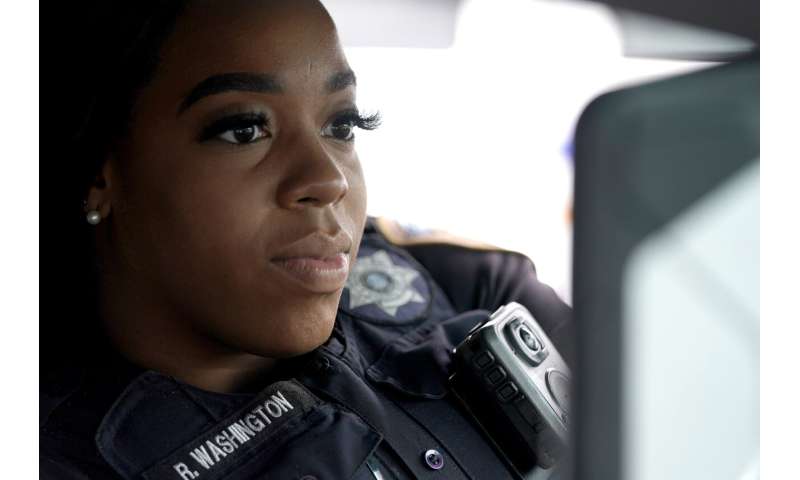 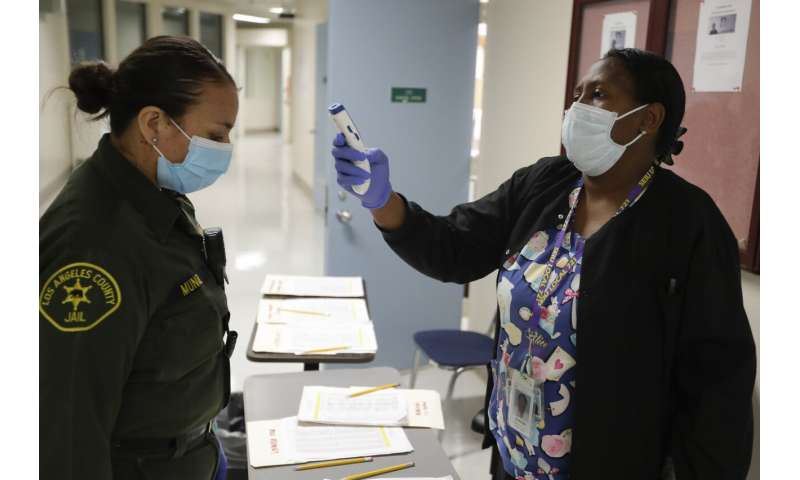 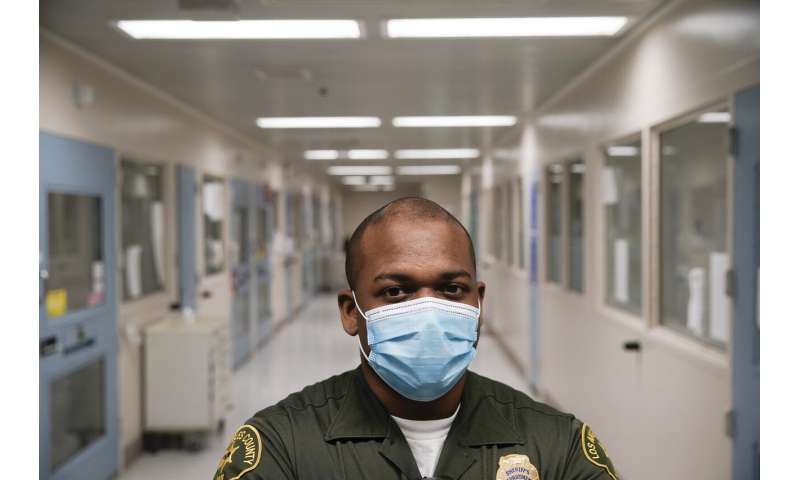 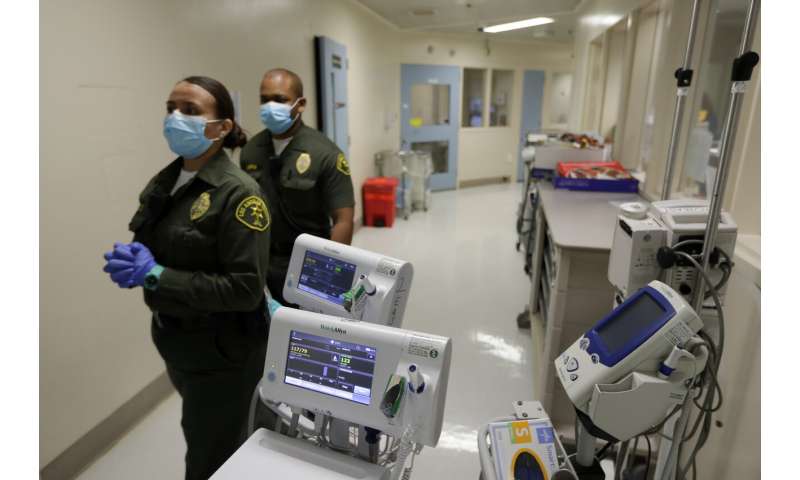 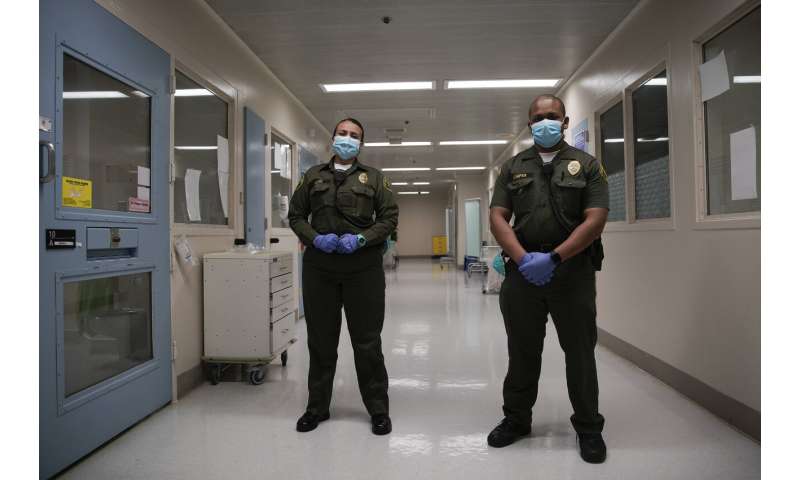 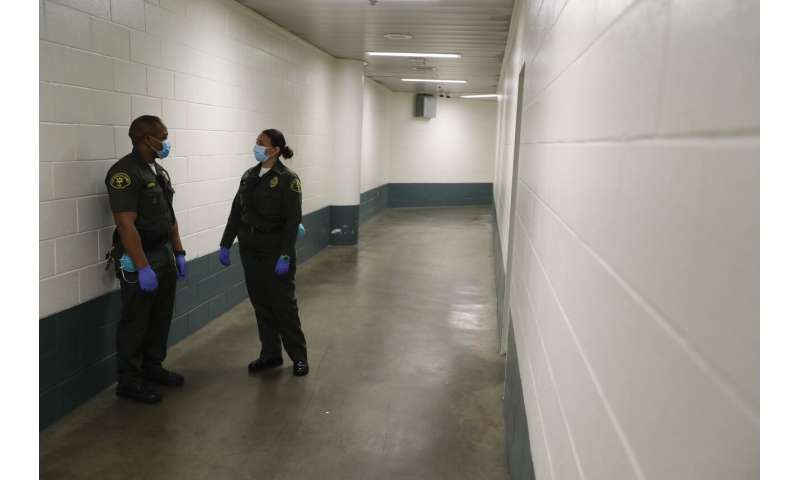 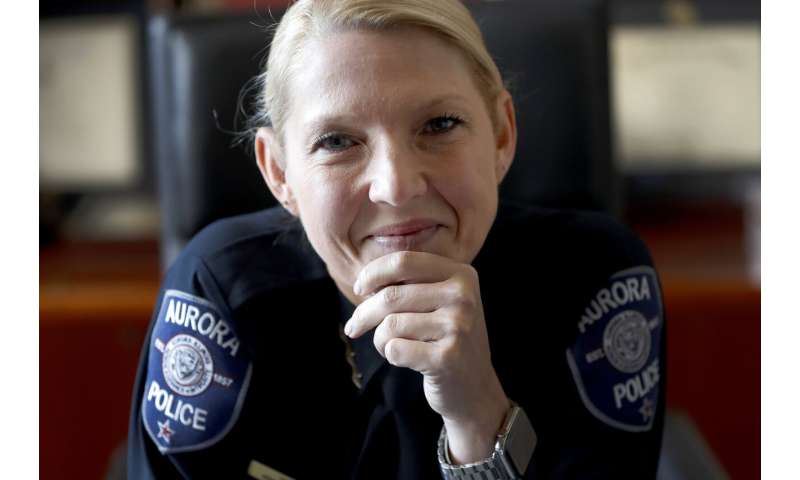 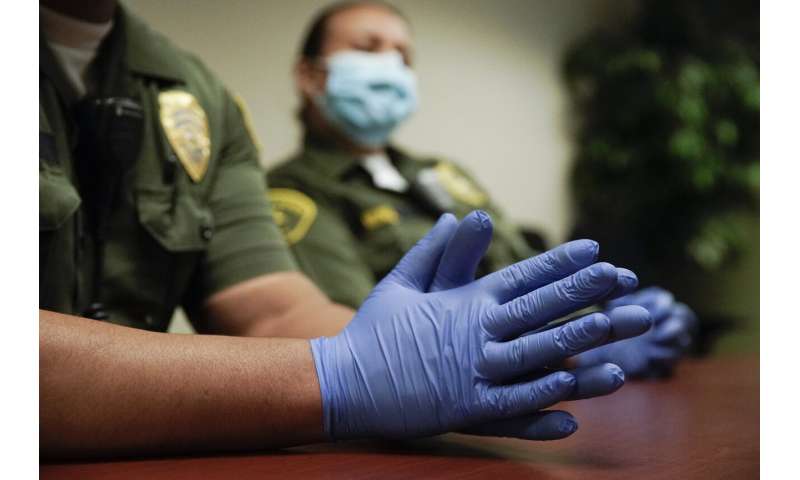 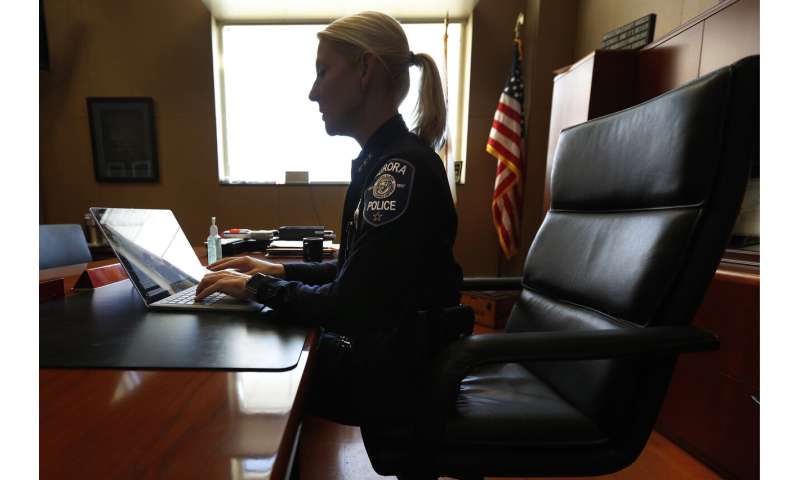 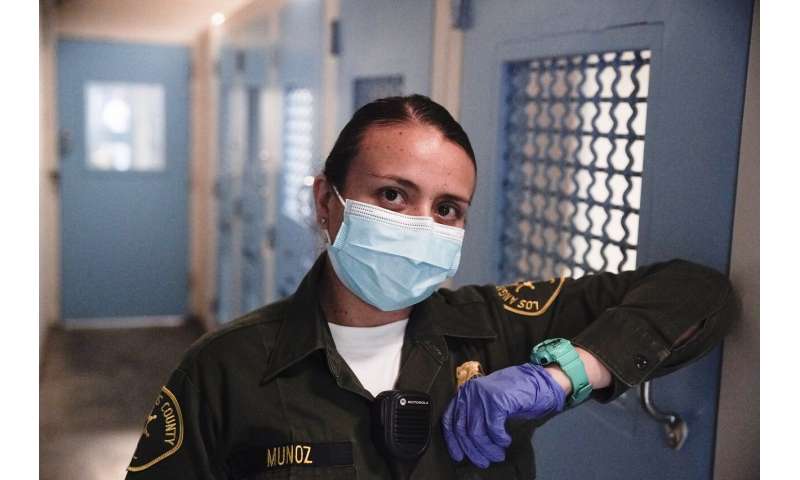 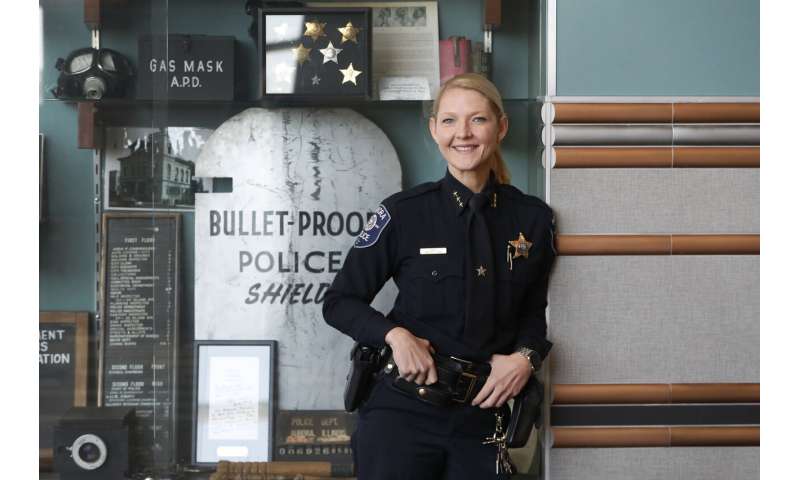 Using Facebook Messenger, Lumpkin and Munoz traded stories and symptoms, bedridden in their quarantined homes as the virus spread outside.

“I will pray for you guys as well,” Lumpkin wrote.

Now, Lumpkin is recovered and back on the line. He changes his gloves and sanitizes his hands each time he works with an inmate and keeps an extra mask hanging off his duty belt.

Munoz takes similar precautions in her office, separate from the inmates.

But she can’t avoid the line forever.