In the medical profession, the Hippocratic Oath is one of the most venerated documents. The Oath states the professional conduct and obligations of doctors; it is an oath of ethics that emphasizes is the importance of ethical and professional standards in medicine, and its name is derived from a Greek physician, Hippocrates, who was widely regarded as the “father of western medicine”. 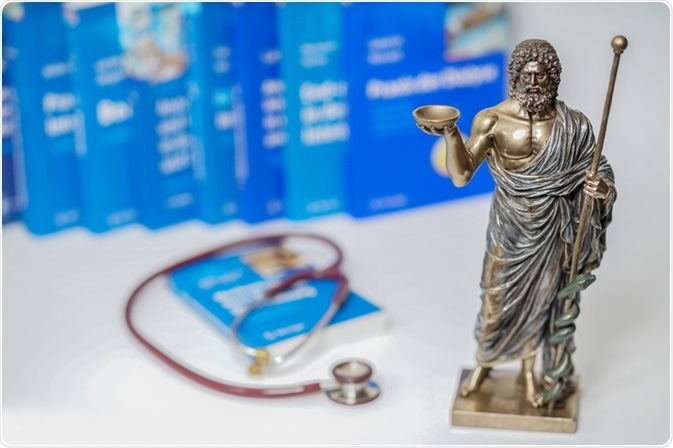 The validity of this is contested as that is no intact evidence to corroborate this. His teachings were disseminated by followers and the collected work is referred to as the Hippocratic corpus. The earliest version of the complete text of the Oath dates to 300 CE. Its history is inconsistent in the following 1500 years after its estimated creation.

Various versions of the Hypocritic Oath were integrated into medical school settings in the 18th century, featuring in graduation ceremonies across the US and Europe. Notably, no single version is used universally.

Present-day use of the Hippocratic Oath

Since the creation of the classical Hippocratic Oath in 400 BCE, there have been several revisions. Moreover, other documents that outline professional ethics have superseded the Oath in importance.

These professional ethics are regularly updated ethical codes which are issued by National Medical Associations. This includes the British General Medical Councils Good Medical Practice and the AMA Code of Medical Ethics, published in 1847.

These documents contain a much more extensive overview of all obligations and professional behaviors of a doctor in relation to their patient and the wider society. Violation of these codes by doctors will result in disciplinary proceedings, including the loss of license to practice medicine.

Despite the more comprehensive and modern-day professional codes, the Hippocratic Oath is still used, perhaps for the sake of posterity. Four widely used versions include:

The current version of the Declaration, which to the current day, has been subject to minimal amends in the >70 years since its adoption, addresses several key ethical parameters concerning medical confidentiality, respect for teachers and colleagues, the patient-physician relationship, and other ethical considerations. A newly revised version adopted by the WMA General Assembly on October 14, 2017, includes several important changes and additions.

These changes reflect the challenges and needs of the modern medical profession. The most notable change in the 2017 revision is the focus on the physician’s wellbeing and the importance of patient self-determination. To reflect the critical importance of patients’ rights, these paragraphs were moved to the beginning of the document, with clauses relating to other professional obligations following this.

Medical ethics was the catalyst for the Declaration of Geneva, following unethical behaviors practiced in World War II. it is important to note that the Oath is not intended to be read alone but considered in conjunction with more specific and detailed policies of the World Medical Association. This includes the international code of Medical Ethics, which was published after the Declaration of Geneva, also as early as 1948.

The revised version of the Declaration of Geneva

The newly revised version of the Declaration of Geneva was adopted by the World Medical Association General Assembly on October 14, 2017, in Chicago:

AS A MEMBER OF THE MEDICAL PROFESSION:

The key additions to the 2017 edition, since the prior 2006 version include respecting the autonomy of the patient; mutual respect for teachers, colleagues, and student physicians to share medical knowledge for the benefit of patients and the advancement of healthcare; and a requirement for physicians to attend to their health as well as their patients.

The latter two additions represent one of the differences between the Declaration of Geneva original Hippocratic Oath.

Overall, the critical component of the Declaration of Geneva is the emphasis on the doctor-patient relationship, which encourages patients’ confidence and autonomy. It is important to note that the revision of the pledge was carried out by individuals from different social, ethical, and religious backgrounds.

Who uses the Oath?

Few UK medical schools use the original version of the Oath, whereas reportedly 43% of US schools still use this. The revisions made to across the 20th century on the more prominent versions used across the UK and US. There is no single unified Oath, and despite it featuring in graduation ceremonies, it is not considered fit for modern-day use.

This is because it does not incorporate patient preferences; the importance of using the information to make decisions; the need to avoid conflicts of interest; to protect patients in clinical trials, as well as several other considerations. As societies differ across the world and across time, the contents of the Oath are subject to change.

What are the penalties for violating the Hippocratic Oath?

There is no one single modern accepted version of the hypocritic Oath, and it is not compulsory to take this. This is at the discretion of the medical school and the core values and principles set by modern-day professional codes of ethics are more important. As such, the Hippocratic Oath is not considered a legally binding document with no direct consequences of violation.