In high-income countries, advances in technology and science have resulted in increased life expectancy. Prospective estimates suggest that by 2050, one-third of the world’s population will exceed 60 years of age.

As a risk factor for chronic disease, aging correlates with diminished productivity and an increasing health burden – by 2050, age-related public spending is expected to double. This health and economic burden has incurred concern worldwide, with the World Health Organisation declaring 2020–2030 the Decade of Healthy Aging.

While an effort to delay, or even reverse, this biological process is underway, the predominant aim is to optimize the functional ability of individuals and populations at large as healthy aging does not require people to be disease-free. This guide outlines the steps that can be implemented to promote aging healthily. 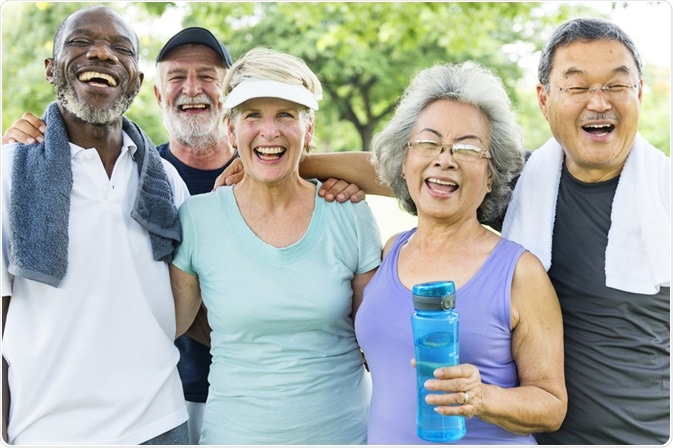 One core component of aging is a decline in immunity – this decline has been termed immunosenescence and contributes to ill-health in old age. Immunosenescence is correlated with reduced efficacy of vaccines alongside increased susceptibility to infection, re-emergence of latent viruses, and reduced immunosurveillance, implicated in an increased risk of cancer.

Alongside immunosenescence is an increase in systemic inflammation called inflammaging. Inflammaging is considered a generic driver of age-related multi-mobility as the level of inflammaging has been associated with increased risk of chronic diseases of the elderly.

What is healthy aging?

The World Health Organization (WHO) published its first World Report on Ageing and Health in September 2015 and delivered its first Global Strategy and Action Plan on Ageing and Health (GSAP) in May 2016. According to the World Health Organization “Healthy aging is the process of developing and maintaining the functional ability determined by the intrinsic capacity of the individual, the environments they inhabit and the interaction between them.”

How can nutrition promote healthy aging?

Older people have an increased propensity for undernutrition, which affects up to 22% of individuals and has subsequent physical and cognitive impairments. These include reduced muscle mass and bone, increased frailty, and decreased cognitive function. Sensory impairments, isolation, loneliness, depression, and poor oral health are also associated with increased undernutrition in the elderly.

As a consequence, changes in body composition occur with progressive decline in body weight as a result of loss of lean mass and an increase in adiposity. Lack of adequate protein consumption increases the risk of sarcopenia, a condition that leads to loss of muscle mass and strength, osteoporosis, and an impaired immune response. Dietary interventions to promote healthier aging include adopting healthier dietary patterns and avoiding obesity.

A range of food-derived factors is implicated in countering molecular damage caused by environmental factors as well as lack of physical activity and poor lifestyle choices Dietary interventions include adopting a Mediterranean style dietary pattern, incorporating antioxidant-rich foods, polyunsaturated fatty acids, and increased consumption of nutrient-dense foods. This helps to negate the issue of low energy consumption in the elderly. The functional effects of key micronutrients that feature in a Mediterranean diet include: 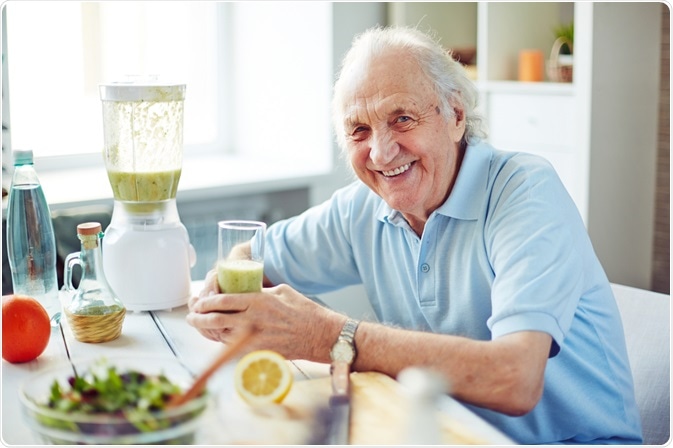 How can exercise promote healthy aging?

Emerging evidence suggests that it is the most important lifestyle factor for maintaining health in the elderly. Inactivity is comparable to tobacco use, obesity, and alcohol consumption as a leading cause of morbidity. Engaging in physical activity has been shown to increase the odds of maintaining wellbeing in later life. Indeed, higher levels of physical activity increase the probability of healthy aging by 39%.

Regular physical activity is correlated with sustained low levels of inflammatory markers in older adults, as well as increases in the levels of anti-inflammatory mediators as a result of active muscle and the concurrent decline in adipose tissue. Adipose tissue typically produces pro-inflammatory cytokines (adipokines) and so, an increase in adiposity with age thus contributes to systemic inflammation and, in turn, to age-related disease.

Sleep is known to affect overall health. Several neurobiological processes occur during sleep, impacting brain health and consequently influence mood, energy, and cognitive fitness. Studies have demonstrated structural and physiological changes that occur in the brain during sleep can influence the ability to learn, and the longevity of new memories formed during the day.

Sleep cycles are comprised of rapid eye movement (REM) and non-REM sleep. During REM there is increased activity in the limbic structures which are implicated in emotion and memory regulation, alongside decreased frontal brain activity involved in analytical thinking. Older adults tend to have less REM sleep, alongside slow-wave sleep (deepest phase of non-rapid eye movement (NREM) sleep), which is associated with motor skill learning. This decrease in slow-wave sleep may impede memory consolidation. In addition, older people are increasingly vulnerable to disturbances that result in poor sleep brain oxygenation such as sleep apnoea and daytime fatigue.

What role does mental health and well-being play in healthy aging?

Alongside nutrition, sleep, and physical activity, social integration is an essential factor in healthy aging. Loneliness is predicted to increase the likelihood of premature aging by 26%. Several interventions occur globally which recognize social wellbeing and explore how to identify, refer, and support those at risk of loneliness.

An elderly age with the promotion of social connections, and therefore good mental health, is essential for healthy aging. Alongside loneliness, mental illness is shown to impair quality of life. Symptoms of depression appear common among the elderly, with studies indicating a prevalence of depressive symptoms affecting between 7.9 and 26.9% of older people. Many symptoms of depression can be addressed by ensuring physical and social activity as well as continued participation and integration into society.