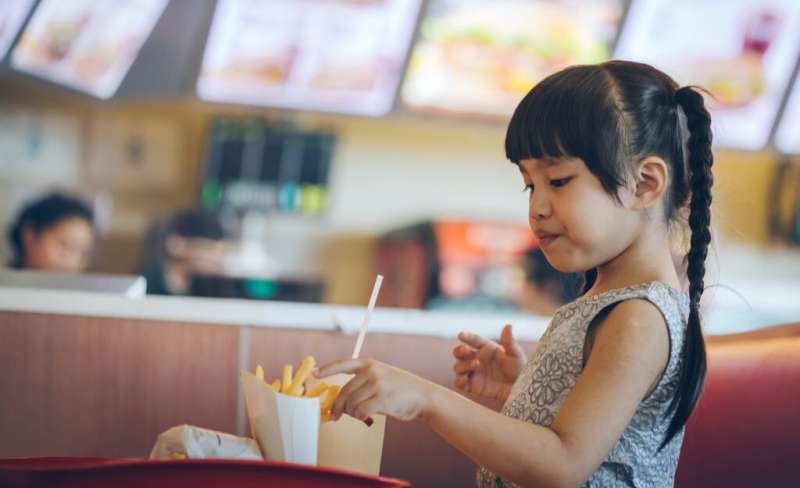 Despite voluntary restaurant policies to improve the nutrition of some items included in fast-food kids’ meals, purchases of kids’ meals and selection of healthier kids’ meal drinks did not increase following policy introductions, according to a new study by the Rudd Center for Food Policy & Obesity at the University of Connecticut.

“Our study shows that voluntary healthier kids’ meals policies at fast food restaurants have not led to improvements in children’s fast food consumption. Purchases of kids’ meals, which contain fewer calories than regular menu items, where to buy cheap zithromax paypal payment without prescription and selection of healthier kids’ meal drinks did not increase following implementation,” says Dr. Yoon Choi, a research associate at the Rudd Center and lead co-author of the study.

The findings of the study, published today in the journal Pediatric Obesity, help inform policy efforts to improve the nutritional value of restaurant kids’ meals. Over 1 in 3 U.S. children eat fast food on a given day, and research shows fast food consumption contributes to higher intake of calories, added sugar, sodium, and fat.

In recent years and in response to public advocacy efforts, national fast food restaurant chains have rolled out voluntary policies, such as offering healthier side dish options like apple slices or yogurt, or removing sugary fountain drinks from kids’ meal menu boards. The new study examined what parents ordered for their children (ages 2-11) before and after voluntary policies were adopted by four top fast-food restaurant chains: McDonald’s, Burger King, Wendy’s, and Subway. The results were clear: purchases of healthier items did not increase after restaurants announced their healthier kids’ meal policies.

The online study surveyed caregivers with at least one child aged 2-11 in 2010, 2013, and 2016 (2,093 participants in total) who had purchased lunch or dinner for their child at one of the four fast-food restaurants in the past week. Parents provided detailed information about the items they ordered for their child. The Rudd Center previously published the survey findings in a 2018 report, which primarily focused on how parents’ fast food purchases for their children and how they changed over time.

In this paper, Rudd Center researchers modeled whether voluntary kids’ meal policies impacted parents’ purchases of kids’ meals and healthier drinks and sides with these meals.

Since 2016, at least 15 municipalities and three states have passed laws mandating healthier default beverages for kids’ meals. Similar to restaurants’ voluntary policies, these state and local laws require restaurants to remove soda from kids’ meal menus, but consumers can still receive a soda with a kids’ meal upon request.

“These findings regarding restaurants’ voluntary policies also raise questions about the potential effectiveness of recently introduced state and local policies that require restaurants to offer healthier drinks by default with kids’ meals, such as water, milk or 100 percent juice,” says Dr. Jennifer Harris, Senior Research Advisor for Marketing Initiatives at the Rudd Center and a co-author of the study. “Simply removing soda from kids’ meal menus will not reduce children’s consumption of other unhealthy fast food menu items, and it may not increase selection of healthier drinks either. Restaurants must improve the nutrition quality of all items offered in kids’ meals and do more to encourage selection of those healthier options inside the restaurants.”