In a recent study published on the medRxiv* preprint server, researchers determine whether previous severe acute respiratory syndrome coronavirus 2 (SARS-CoV-2) infection protects from reinfection. The results showed that convalescent patients had lower odds of being reinfected with SARS-CoV-2 as compared to those without a prior coronavirus disease 2019 (COVID-19) positive test result. 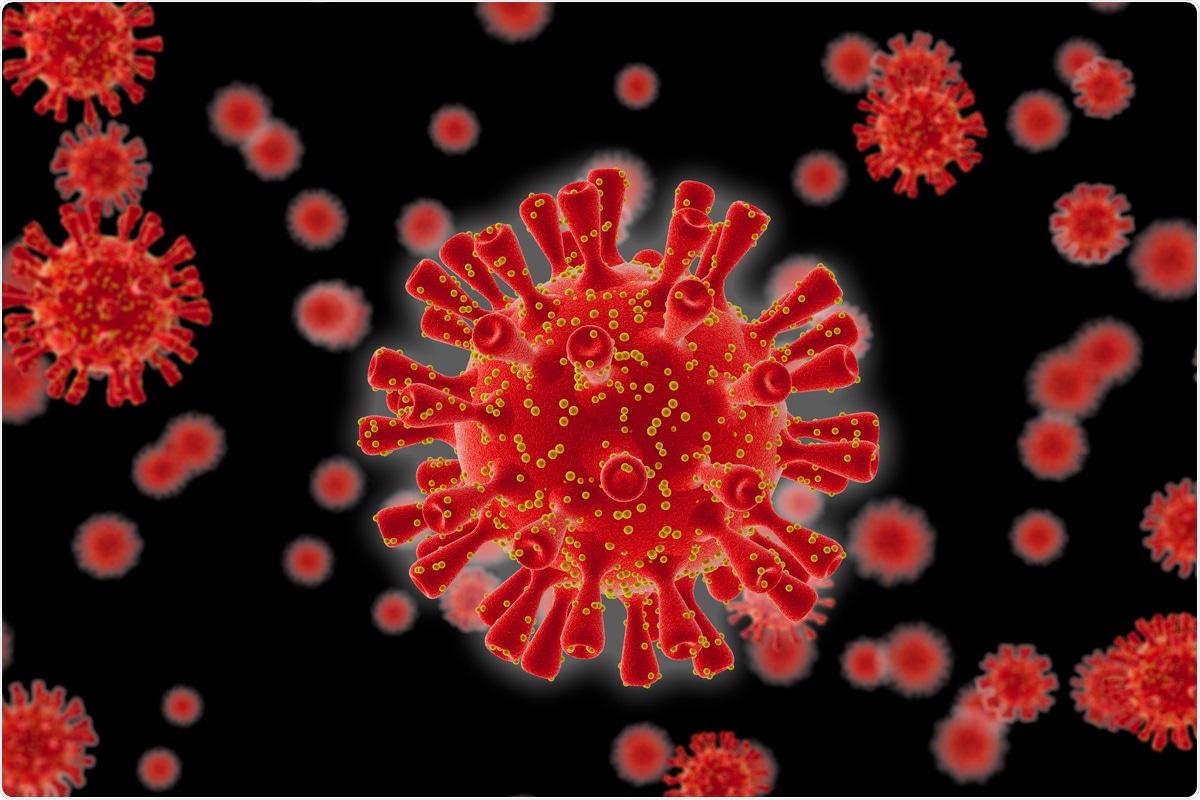 The risk of reinfection is associated with seasonal coronaviruses in humans and is of prime significance to understand the reinfection rate in SARS-CoV-2 convalescent individuals, as this population is constantly increasing. In the context of novel SARS-CoV-2 variants, understanding the durability of initial SARS-CoV-2-associated immunity and the degree to which it grants protection from reinfection has also become increasingly important.

The present retrospective observational study was conducted between March 1, advair coupons rebates 2020, and December 31, 2020. The data on COVID-19 positive cases from Second Generation Surveillance System (SGSS) and individual level negative test data from England stored in the Unified Dataset (USD) was used for this study.

Individuals aged 10 years or older who were found to be positive for COVID-19 by polymerase chain reaction (PCR) assay for the first time from March 1, 2020, to September 30, 2020, were identified. All test subjects were also matched with controls based on age, gender, testing route (community- or hospital-based COVID-19 testing), the upper-tier local authority of residence, and who tested COVID-19 PCR negative during the same week.

The follow-up period started after the 90-day pre-follow-up period and continued until December 31, 2020. During this vaccine-free period, the occurrence of reinfection and the number of deaths within 28 days of a positive PCR test were determined.

Reinfection cases were identified from the sequential positive PCR results for the same individual at or after 90 days from the SGSS database.

After two rounds of matching between the case and control lots, a total of 517,870 individuals were enrolled for the study. Among the 14,913 participants who had a positive test during the follow-up period, 2,815 were reinfected in the case group and 12,098 had a first-time positive test result in the controls.

Convalescent individuals had a 78% lower risk for reinfection than those in the control group, with an odds ratio (OR) and 95% confidence interval (CI) of 0.22 and 0.21-0.23, respectively. According to the univariable analysis, males had 32% lower odds of testing positive than females during the follow-up period.

Among individuals with a positive PCR test during the follow-up period, convalescents had 77% and 45% lower risk of symptoms and death within 28 days of a positive PCR test, respectively, as compared to the controls. Participants aged 50 years or older had 57 times more odds of dying as compared to those between the ages of 10 and 49 years, and males had a two times higher mortality risk than females. 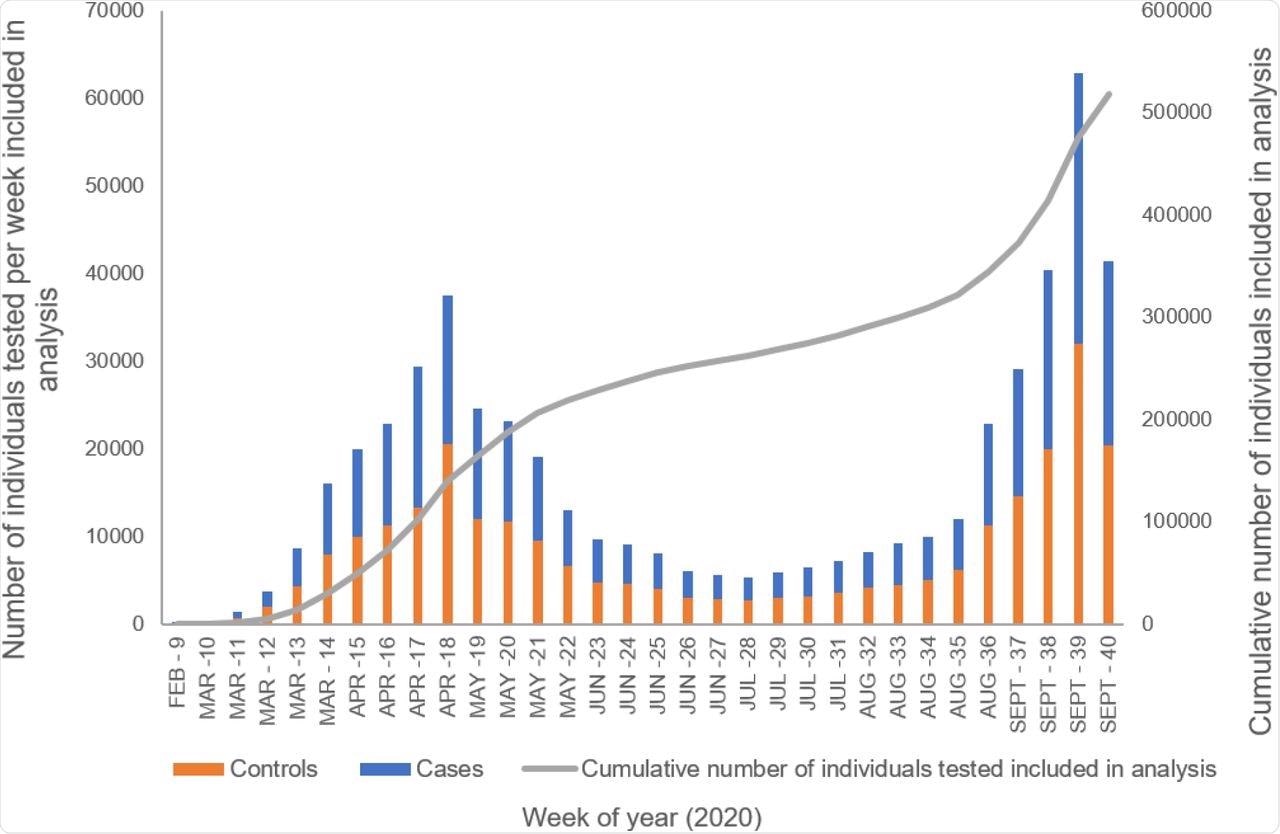 Distribution by week of test for total individuals (cases and controls) included in final analysis.

The sensitivity analysis demonstrated that convalescent cases had higher odds of testing positive than the controls who had their first test in March, April, and May, and a subsequent positive test during the follow-up period at 90-, 60-, 30-day timepoints, respectively.

The post hoc analysis excluded individuals who had their first test during March, April, and May and a subsequent positive test between June and September 2020. The final post hoc dataset included 255,948 individuals each in the case and control cohorts, and the odds of cases testing positive was 82% lower than controls, with an OR and 95% CI of 0.18 and 0.17-0.19, respectively.

Reinfection cases had 1.9 times the odds of spike-gene target failure test (SGTF) as compared to controls during their first positive test, which is indicative of the SARS-CoV-2 Alpha variant. Residents of East and Southeast England had 84% lower odds of SGTF than residents of London with an OR and 95% CI of 0.16 and 0.13- 0.19, respectively. 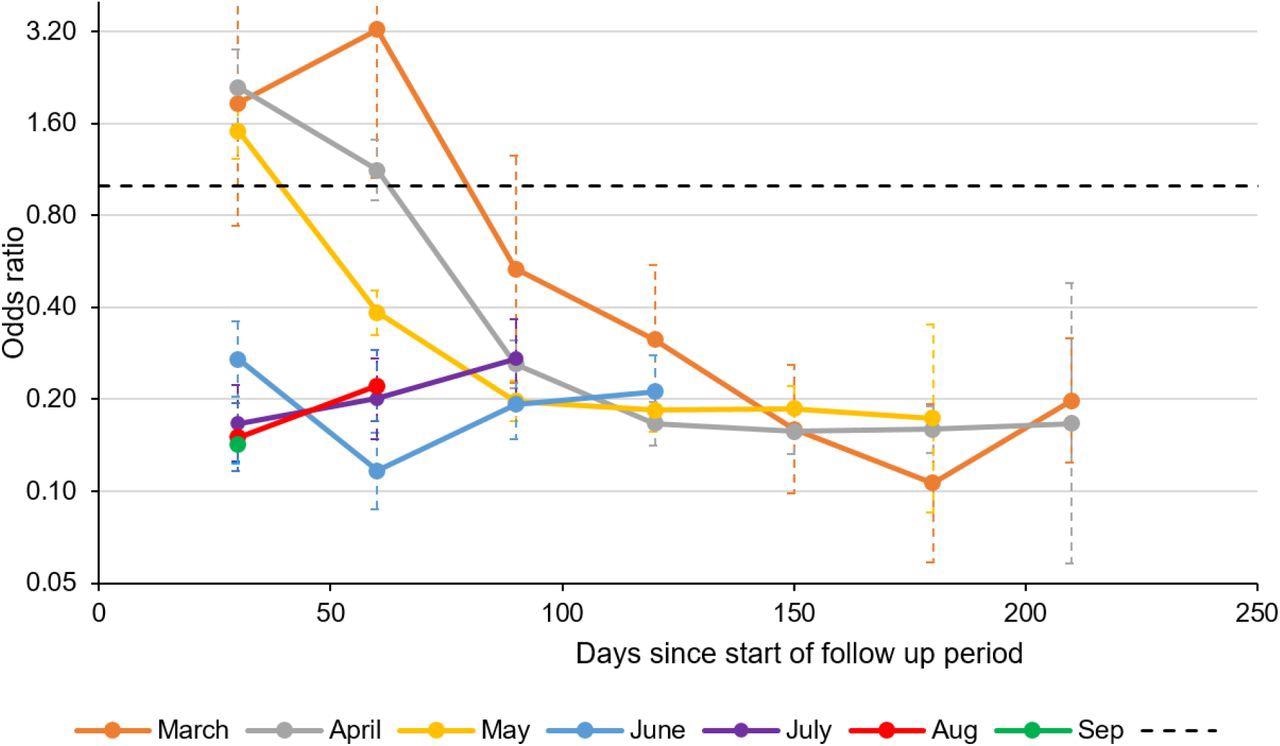 Among our matched cohort of 517,870 individuals, there were 2,815 reinfection cases and 12,098 first infection cases up until 31 December 2020. Therefore, individuals with a prior SARS-CoV-2 PCR positive test had 78% lower odds of having a second infection compared to individuals with no prior positive, from at least 90 days after their positive test up to a maximum of 9 months later. Protection increased to 82% lower odds in our post-hoc analysis. These findings demonstrate a baseline of protection from a prior SARS-CoV-2 infection against reinfection before the widespread introduction of vaccination against COVID-19 in December 2020.

The disparity found in the sensitivity analysis, despite the overall protective effect of prior SARS-CoV-2 infection against reinfection, may be associated with the fact that most positive cases were attributed to elderly and hospitalized patients during the beginning of the pandemic.

Further extensive longitudinal studies with data from each SARS-CoV-2 infection episode are required to categorize the actual cases of reinfection and SARS-CoV-2 cases that are RNA-positive over a long period. The study highlights the necessity of continued monitoring of reinfection risk in convalescent individuals, given the emergence of heavily mutated SARS-CoV-2 variants of concern.