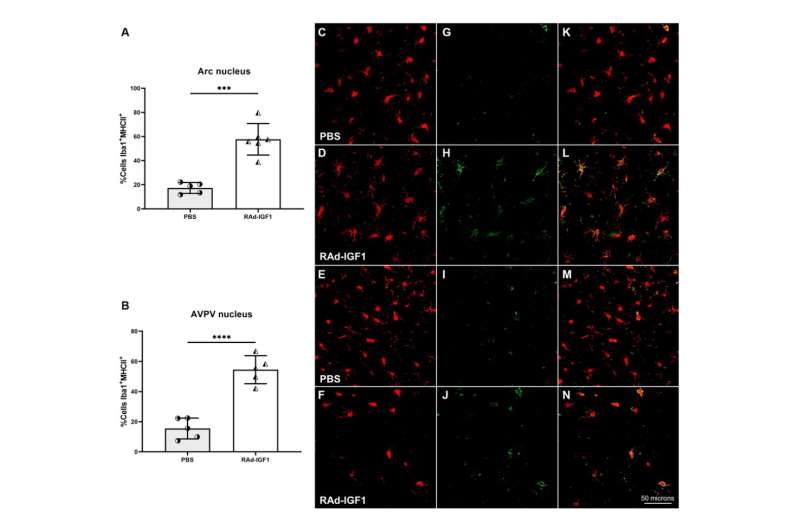 A new research paper titled “IGF1 gene therapy in middle-aged female rats delays reproductive senescence through its effects on hypothalamic GnRH and kisspeptin neurons” has been published in Aging.

The process of aging is the result of progressive loss of homeostasis and functional body impairment, including the central nervous system, where the hypothalamus plays a key role in regulating aging mechanisms. The consequences of aging include a chronic proinflammatory environment in the hypothalamus that leads to decreased secretion of gonadotropin-releasing hormone (GnRH) and impairs kisspeptin neuron functionality.

“The aim of the present study is to investigate the effect of IGF1 gene therapy on estrous cycle, kisspeptin and GnRH neurons, and microglial cells in middle-aged female rats,” the researchers explain.

The results show that IGF1 rats have higher kisspeptin expression in the anteroventral periventricular (AVPV) nucleus and higher immunoreactivity of GnRH in the arcuate nucleus and median eminence. In addition, IGF1-treated animals exhibit increased numbers of Iba1+ microglial cells and MHCII+/Iba1+ in the AVPV and arcuate nuclei. In conclusion, IGF1 gene therapy maintains kisspeptin production in the AVPV nucleus, induces GnRH release in the median eminence, and alters the number and reactivity of microglial cells in middle-aged female rats. The researchers suggest that IGF1 gene therapy may have a protective effect against reproductive decline.